The Palestinians are divided over the recent announcement by four Arab nations to cut ties with Qatar, as Hamas seems to be worried about its relationship with its main backer in the region. 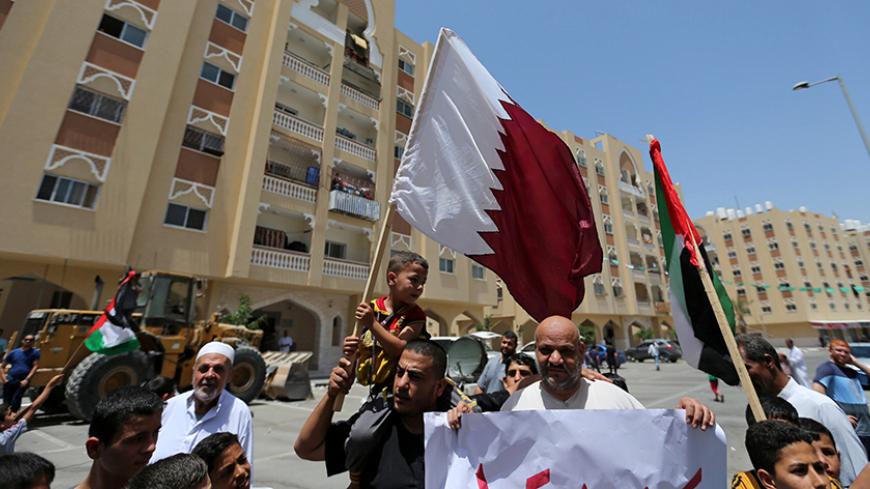 A Palestinian man and his son hold a Qatari flag during a rally in support of Qatar inside the Qatari-funded construction project Hamad City, southern Gaza Strip, June 9, 2017. - REUTERS/Ibraheem Abu Mustafa

Palestinians in the Gaza Strip immediately reacted to the Arab nations’ announcement June 5 of severing ties with Qatar over its alleged support for terrorism. Some backed the decision of Saudi Arabia, the United Arab Emirates (UAE), Egypt and Bahrain, while others opposed it given Qatar’s position and role in the Palestinian scene.

Mohammed al-Sinwar, a citizen from Khan Yunis, told Al-Monitor that the decision came after US President Donald Trump described Hamas as a terror group during the Arab-Islamic-American summit in Riyadh May 21.

He said, “Following these remarks, the four Arab nations sought to make it look like Qatar is the main backer of the Hamas movement, especially since the latter’s leadership is based in Doha. So these countries decided to cut diplomatic ties with Qatar to pressure it to expel Hamas leaders. It seems these attempts will succeed, and Qatar would be forced to expel Khaled Meshaal, the former head of Hamas’ political bureau, and the other Hamas leaders. If such scenario unfolds, Hamas would lose its main financial source of money that it uses in the Gaza Strip.”

Mohammed Zoorab, another citizen from the city of Khan Yunis, told Al-Monitor that the decision to cut ties with Qatar represents a pressure card on Hamas. He expects the humanitarian situation to worsen in Gaza in the coming days.

Zoorab said, “It [seems] obvious that Qatar is in a tough position when it comes to abandoning Hamas, and it seems it does not want to go through with such a step. But Hamas may have to offer in the upcoming period more concessions to prevent the deterioration of the situation in Gaza, while at the same time maintaining its relations with Qatar.”

Other Palestinians believe the Arab decision against Qatar is the result of Doha’s support of some parties that contribute to the divisions plaguing the Arab scene, such as the armed factions in Syria and Hamas in Gaza, as Amir Mohammed, from Gaza City, put it.

Speaking to Al-Monitor, he said, “Qatar supported several divisions in the Arab region, and most importantly in the Gaza Strip when Hamas took control of Gaza by force in 2007. If it weren’t for Qatar’s financial support for Hamas, the [Palestinian] division wouldn’t have lasted this long. So the recent decision is some kind of disciplinary measure against Qatar that has strengthened the division.”

Qatar has largely helped support Gaza and Hamas through several projects, including the development of the Salah al-Din Road, the establishment of schools and hospitals, and the construction of the residential Hamad City in Khan Yunis. Also, in 2014 and 2016, Qatar paid the salaries of more than 40,000 government employees appointed by Hamas, whom the Palestinian consensus government refused to recognize.

One day after issuing the decision against Qatar, Saudi Foreign Minister Adel al-Jubeir said in a June 6 statement that Doha must end its support to groups he described as terrorists, such as the Muslim Brotherhood and the Hamas movement. He said, “Enough is enough. Nobody wants to hurt Qatar. Qatar has to choose.”

Hamas, for its part, expressed in a June 7 statement its regret and indignation at Jubeir’s statements, which it considered to be inflammatory. The movement added that such remarks do not reflect the Saudi position that has been characterized by its support for the Palestinian cause.

The statement read, “The Palestinian people and the Arab and Islamic nations, which view the Palestinian cause as a core issue, are shocked by such statements. These nations consider Hamas as the legitimate resistance movement against the occupation that represents a common enemy for both the Islamic and Arab nations. Also, Jubeir’s statements go against international laws and the Arab and Islamic stances, which all assure the right of our people to resist and struggle.”

Hamas leader Ahmed Yousef said the decision of the Arab nations to cut ties with Qatar and the statements against Hamas are unexpected, oppressive measures on the part of Saudi Arabia and some other Arab countries.

He told Al-Monitor, “In general, Gulf countries have supported either Arab dictatorships or liberation and opposition movements in the region. If they want to consider such support as backing terrorism, then each Gulf country is concerned. Each Gulf country, including the UAE, Saudi Arabia and Qatar, are responsible for what is currently happening in Syria and Iraq and are behind the support provided to armed factions. Thus, by that logic, all have in one way or another contributed to fueling the conflicts.”

Yousef believes that attention on Hamas and Gaza will fade due to these measures. He said, “The Palestinian situation will be affected and any measure, dispute or conflict in the region will negatively reflect on the Palestinian cause. Support and aid to Palestinians will significantly dwindle. But this also depends on whether the tensions between Qatar and the Arab nations will continue.”

Independent political analyst Reham Awda believes Qatar will not completely cut its ties with Hamas and will maintain a small thread with the movement. She also expects Qatari support to be reduced only temporarily, until the crisis passes.

Awda told Al-Monitor, “Hamas may be politically isolated in the Arab world at this critical time. However, the movement still enjoys good relations with other Islamic countries such as Iran and Turkey, which would lessen this isolation.”

Awda noted that Qatar, too, will not give in easily to Arab pressures. It will rather try to overcome the crisis peacefully by reducing Hamas’ presence and political activities inside its territories, while at the same time keeping a minimum presence of Hamas representatives.

Ibrahim al-Madhoun, a political analyst close to Hamas and political researcher at the political and research institutes affiliated with the movement, told Al-Monitor that the last internal elections allowed Hamas to move its main leadership into Gaza, which is why the movement would [probably] not get too affected by Qatar’s potential serious decisions against Hamas to please the Arabs.

He said, “Hamas’ relations with Qatar will continue even if the latter takes some measures to reduce [Hamas’ presence in its territories]. Qatar has its priorities straight and it is important for it to protect its security and stability. Hamas would appreciate any step taken by Qatar, especially since it provided refuge for the movement during hard times and offered so much support for Hamas.”

It seems the diplomatic crisis ongoing between Qatar and Arab nations has put Hamas and the Gaza Strip in the eye of the storm.