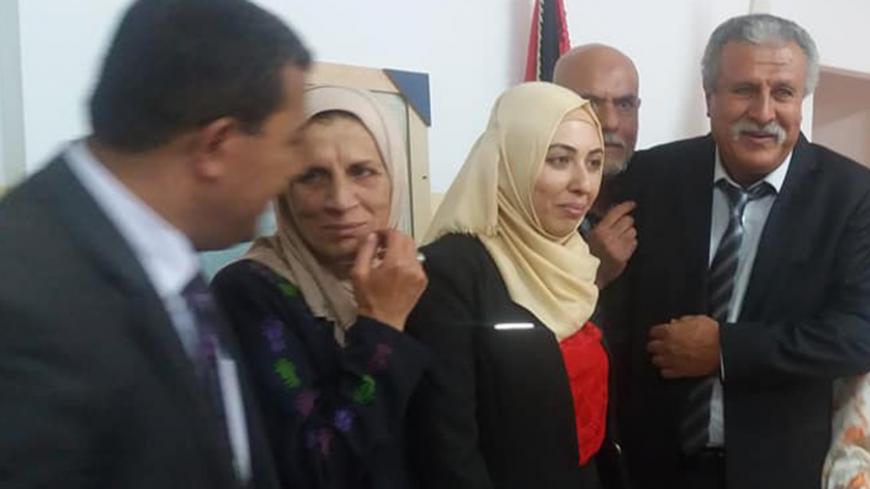 Yusra Mohammed Badwan (C in red) is the youngest Palestinian woman to be elected mayor in Palestine in the town of Azzun, West Bank, May 25, 2017. - Facebook/صفحة بلدية عزون الرسمية

In her critics' eyes, the new mayor of Azzun already has two strikes against her: her gender and her youth. But Yusra Mohammed Badwan plans to swing away, claiming opposition just makes her stronger.

Badwan, 25, became the youngest female mayor in the Palestinian territories after her independent list, the Prisoners’ Bloc, won in the local elections. On May 22, the elected bloc chose a mayor, and Badwan won with six out of 11 votes.

She grew up in Azzun, which is 24 square kilometers (9 square miles) and has a population of 12,000. Badwan graduated in 2012 with a bachelor's degree in electrical engineering from Palestine Technical University in Qalqilya. She worked as a contracting engineer in the city of Jericho in the eastern West Bank and as a supervisory engineer in the Cooperative Housing Foundation. She also participated in social volunteer work in her hometown, which made her face known among the people who gave her their vote of confidence.

“I didn't hesitate to run in the local elections in Azzun because I want women and youth to be more involved in these elections and I aspire to make a positive change in my hometown," she told Al-Monitor. "I first ran in October 2016, but the government decided to postpone the elections due to disagreements between Hamas and Fatah at the time."

Her family and friends strongly encouraged her to run, to inspire the town's women to show society their abilities.

Like any woman in the Palestinian territories, Badwan was negatively perceived by society when she assumed this high-ranking position. “Certainly, not everyone was pleased with my winning, and I saw many negative comments online rejecting the idea of a woman in her 20s becoming mayor. But this will not affect my determination. On the contrary, I have become braver; I will prove society wrong and break this stereotype against women,” she said.

One Facebook user commented on Azzun municipality’s Facebook page, saying, "Are there no men left in Azzun? Why did you accept a woman? The great town of Azzun has become a joke.” Meanwhile, another user commented, “A people that has allowed a woman to rule will never succeed.”

Despite such negative responses, Badwan received many positive comments and support from other activists. “I grew up in a family that doesn't pay much attention to societal stereotypes that prevent women from achieving the goals they desire. My father encouraged me greatly and is very proud of me for assuming this position,” she said.

Badwan believes age has nothing to do with efficacy and the ability to make a difference.

“I will show everyone that women can make a difference, no matter their age. I will contribute to developing the town’s facilities and try to provide better life services for citizens,” she said. “I will benefit from all those who preceded me in this position, and I will take comments under advisement. Hard work pays off, and I wish myself all the success.”

As to what she hopes to achieve during her four-year term, she said, “As the mayor, I am currently studying the situation here to be able to prepare a plan to develop the facilities in a town such as Azzun, the mother of the countryside in Qalqilya. I will also work on providing employment opportunities for young people.”

In general, mayors have many tasks, most importantly, developing the city or town by organizing housing projects, establishing public facilities such as parks and libraries, paving roads, improving services such as sanitation and water and making sure residential neighborhoods stay clean.

When asked about the biggest challenge she might face, Badwan said, “The Israeli occupation.” She added, “Our town is under Israeli siege. Its eastern entrance is closed due to the Ma'ale Shomron and Karnei Shomron settlements, while the Israeli occupation forces have placed concrete cubes on two other entrances, as well as a metal gate on the town’s main entrance, which the occupation forces open and close as they please.”

According to Badwan, the town is also beset by ongoing military incursions, in addition to being surrounded by the apartheid wall that isolates it from other villages, not to mention the Israeli settlements built on agricultural lands confiscated from their original owners.

Nidal Shabita, head of the Jerusalem Bloc, which won three seats in Azzun’s village council, said that a woman in her 20s becoming mayor is a rare case in conservative, patriarchal Palestinian society.

“We supported Badwan for this position because we believe in the need to change the way society views women, and we think women should be encouraged to hold other high-ranking positions in all Palestinian institutions," Shabita told Al-Monitor.

Badwan "is an educated young woman with a broad horizon of work [ahead], and we wish her success and excellence,” he added, stressing that all members of the village council are ready to cooperate with her to make this experience a success.

Badwan hopes to bring prosperity to her hometown. She has called on the Palestinian government to provide continued financial support to the town to pave its rural roads and build public facilities.