In an interview with Al-Monitor, Zionist Camp Knesset member Yoel Hasson explained why he thinks the Zionist Camp can win votes in the large settlement blocs. 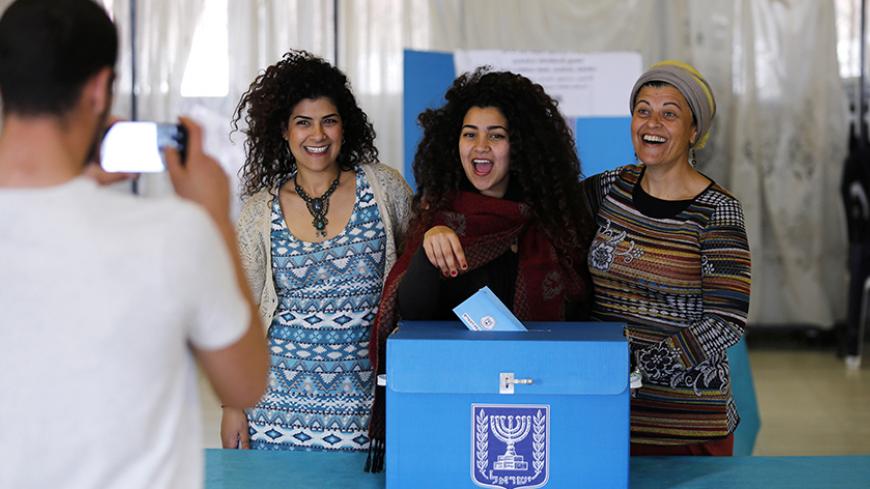 Jewish settlers have their picture taken as they cast ballots at a polling station in the West Bank Jewish settlement of Itamar, March 17, 2015. - REUTERS/Amir Cohen

When Zionist Camp Knesset member Yoel Hasson asked if he could pay a visit to the Kida outpost to speak to the settlers there, the local residents agreed, eagerly. In the heart of the settlement movement, in a place where no one was likely to vote for him, Hasson engaged the settlers on Jan. 5 in one of the most fascinating political discussions he had ever had. It also happened to be one of the most relaxed.

Kida is a communal village of 40 families founded in 2002. Hasson went there as part of his party’s effort to reach out to new constituencies on the right and in the development (or periphery) towns. It was part of a program that emerged in response to the party’s failure to win support among these constituencies in the March 2015 elections. In this particular case, however, Hasson knew that he wouldn't be winning new votes for his party. He simply sought to initiate a dialogue, thinking optimistically, “On the day after an agreement is reached [with the Palestinians], we will all have to live together.”

Hasson grew up in the Likud. He followed Prime Minister Ariel Sharon when he quit Likud to found Kadima, then joined Tzipi Livni in creating the Hatnua Party and stayed with her when she merged the party into the Zionist Camp. This political history makes Hasson the ideal person in the Zionist Camp to lead efforts to reach out to the settlers.

While Hasson embarked on his journey into the heart and soul of the right, a highly publicized feud broke out in the Labor Party, the larger partner in the Zionist Camp, over the diplomatic plan proposed by Zionist Camp leader Isaac Herzog. This feud has only served to exacerbate the public's sense that the Zionist Camp is still finding its way.

In an interview with Al-Monitor, Hasson said he believes the Hatnua-Labor partnership will survive and take part in the next elections. He also thinks the Zionist Camp will find new voters in the larger settlement blocs.

Hasson:  Absolutely not. This meeting was intended, first and foremost, to get to know one another and to prove that we can talk and engage in civil discourse despite the sharp differences between us. Regardless of what ultimately happens, we will still be living together in the end, within the same borders. It is obvious to me that no one in Kida voted for us or will vote for us, and actually, I have to admit that it’s a good feeling to go somewhere knowing in advance that your goal is not to convince anyone. We spoke for 2½ hours. It was an honest and open dialogue despite the vast differences between us. I left feeling encouraged, because when the issue of the Palestinians came up, they raised it with a question mark instead of an exclamation point. They also realize that there is a demographic price to pay for keeping all the territories. Deep inside, they know that it is impossible for us to give blue [Israeli] identity cards to millions of Palestinians. When they started to talk about the “resident” status that the Arabs of East Jerusalem have, I used their own argument as a mirror. I told them that if they [the Palestinian permanent residents of East Jerusalem] decide tomorrow that they want to participate in Jerusalem’s municipal elections, the newly elected mayor of Jerusalem will be a Palestinian. It was moments like that during our conversation that caused me to feel like they also have some questions to ponder. They do not have obvious answers for everything.

Al-Monitor:  What was the biggest problem you faced talking to them?

Hasson:  I don’t know how to answer their arguments that are based on faith or belief in God. One of the women said to me, “Let’s say I agree to be evacuated, but in the end, God doesn’t allow me to leave.” How can I argue with a faith that strong? I can say that a political decision cannot be based on something like that, but I can also understand her faith-based approach, even if I recognize that it is difficult to think diplomatically under such conditions.

Our decision to begin with the “hard core” of the settler movement was intentional. Down the road, we plan to visit settlements in the settlement blocs that will remain part of Israel under any agreement. I intend to win over supporters there by putting the situation into sharper focus for them. When we treat Kida and [the settlement city of] Ariel the same way, we are actually putting Ariel and Gush Etzion [Etzion settlement bloc] at risk. That is why it is better if they [the settlers] did not compare the two. I believe wholeheartedly that the Zionist Camp is the one party that will advance the cause of the settlement blocs. Anyone who is evacuated will go live within those blocs.

Al-Monitor:  Do you really believe that anyone in Karnei Shomron or Ariel will vote for you?

Hasson:  I am confident that we can convince people in Ariel and Karnei Shomron to vote for the Zionist Camp. After all, we are the only party that considers preserving the settlement blocs to be an objective. We draw a distinction between Ariel and Gush Etzion on the one hand, and the tiny settlements and outposts along the central mountain ridge on the other hand. [Zionist Camp co-leader] Tzipi Livni was involved in formulating the Bush document, back when Ariel Sharon was prime minister [2004]. Sharon was the first, and so far the only, prime minister to succeed in obtaining an official American document stating that regardless of what diplomatic scenario unfolds, the settlement blocs will remain part of the State of Israel.

Al-Monitor:  It sounds as if you are adopting the same line as the right.

Hasson:  The Labor Party and Tzipi Livni [Hatnua] joined forces in an attempt to create a centrist party. About 800,000 people voted for us, but as impressive as that achievement was, it was not enough to bring us to power. One of the reasons was that we failed to relay the message that supporting a two-state solution is not a sign of weakness. On the contrary [it is a sign of strength]. The challenge before us is to explain that while we believe in a two-state solution, we do not plan to compromise on security. Furthermore, our position makes it possible for us to obtain international support for any military moves we must take. [Prime Minister Benjamin] Netanyahu has no international support, which is why he is so wary about using force.

I can also understand the concern among the Israeli public that some [diplomatic] agreement or other will not last, given the current circumstances. One of the lessons we learned is that there is no reason for us to ignore the concerns and fears of our citizens. We shouldn't downplay or ridicule them, because in many cases, those fears really are justified.

Al-Monitor:  So what’s the difference between you and Netanyahu? He also recognized the need for a two-state solution, but said that he didn’t think that we could reach an agreement at present.

Hasson:  There is a vast difference between us. Ostensibly, Netanyahu is maintaining the status quo in Judea and Samaria, but the fact is that there is no such thing. The situation in Judea and Samaria is dynamic. Netanyahu is acting both openly and covertly to bring about a situation in which it will be impossible to implement separation between the Palestinians and us. I believe that this would be a very bad situation for the settlement blocs. Every tiny outpost threatens our ability to keep Ariel. I serve as the Knesset’s representative to the European Parliament, where I constantly hear them describing Ma'ale Adumim as a settlement. That is a problem. Ariel and Itamar are the same as far as the Europeans are concerned. That is the danger we face. Chaotic and unrestrained settlement activity threatens our ability to separate.

Al-Monitor:  What do you think about the way people in your party are attacking Herzog over his separation plan?

Hasson:  Sadly, I’ve been seeing more spitefulness there than in any of the other parties I’ve been in. I have experience being a member of a party that did not know how to back its leader. That’s what happened with Tzipi in Kadima. I am, therefore, fully aware of how that can destroy a party. It is important to back Herzog. We are living in a political system, and attacks of this sort aren’t necessarily innocent. There are personal interests at stake, especially when it comes to the battle over who will lead the Labor Party. The positive thing that is happening here is that the diplomatic dialogue is finally rising from its slumber.