Israeli opposition leader: 'Peace will have to wait'

In an interview with Al-Monitor, Zionist Camp and opposition leader Isaac Herzog discusses his new plan to restore security while waiting for the right time to resume pursuit of a two-state solution. 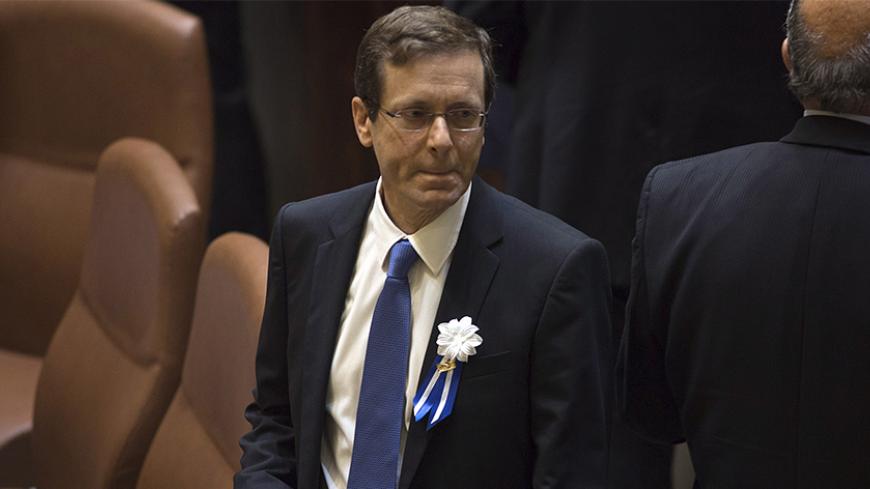 Isaac Herzog, leader of the Zionist Camp, attends the swearing-in ceremony of the 20th Knesset in Jerusalem, March 31, 2015. - REUTERS/Heidi Levine

Zionist Camp and opposition leader Isaac Herzog flew to Paris Jan. 21 on a diplomatic visit. In his briefcase, he carried his Plan for Separation from the Palestinians, which he plans to present to French President Francois Hollande and Foreign Minister Laurent Fabius.

Herzog's plan is based on the assumption that it is impossible to implement a two-state solution in the immediate future, because Prime Minister Benjamin Netanyahu and Palestinian President Mahmoud Abbas are both wary of moving in that direction. The first stage of Herzog's plan calls for restoring calm and focusing on reinstating security through various steps taken by Israel. Chief among the steps is “separation from as many Palestinians as possible” in as short a time as possible. The part of the plan that draws the most attention, and rightfully so, is Herzog's proposal to separate the Palestinian areas of East Jerusalem from the rest of the city. He suggests doing this by building a wall. Herzog also recommends completing construction of the separation wall in the West Bank in a way that includes the large settlement blocs adjacent to Israel.

Herzog had revealed his new plan in a Jan. 19 speech at the annual conference of the Institute for National Security Studies in Tel Aviv. His plan is a refreshing initiative for the Zionist Camp, the largest party in the center-left bloc. It offers a realistic reading of the situation. According to Herzog's perspective, it is impossible at the moment to reach a two-state solution, so there is no choice but to postpone it to a later date. In the meantime, the focus should be on restoring security. Until the March 2015 elections, the leaders of the left, including Herzog and Tzipi Livni, had stuck to the tired paradigm of a two-state solution. They could not, however, adequately respond to the right’s argument that “there is no one to talk to.”

It appears that Herzog adapted his new approach in light of the current reality. He is distancing himself from automatically aligning with plans for diplomatic negotiations based on a two-state solution. Instead, he is proposing an interim plan that will save the two-state solution from becoming an impossibility by freezing construction outside the major settlement blocs and promoting trust-building economic measures, especially ones that can help restore calm. Over the coming weeks and months, Herzog will promote his plan to Israelis, hoping that it will create public pressure sufficient to force Netanyahu into adopting at least some of his ideas.

By presenting a pragmatic diplomatic agenda, Herzog has finally confronted the problem of the left’s irrelevancy over the past few years. Politically, this is the right kind of thinking for someone who plans to lead the Zionist Camp in the next elections and to fight Yesh Atid Chairman Yair Lapid for moderate-center votes. Herzog is therefore offering a relevant agenda, perhaps even an original one, that includes security components while also striving to reach a diplomatic solution by taking unilateral steps.

“I reviewed the [diplomatic] track and reached the conclusion that there is no reason for us to focus at the moment on something that cannot be achieved,” Herzog said in an interview with Al-Monitor, explaining what caused him to seek diplomatic alternatives after more than two decades of sticking to the idea of negotiating with the Palestinians on the basis of a two-state solution.

Al-Monitor:  What prompted you, at this particular moment, to reach the conclusion that achieving an agreement is currently impossible?

Herzog:  I’ve been observing the situation for some time, and I realize that right now it would be impossible to negotiate a two-state solution. Let there be no misunderstanding: I have not abandoned the idea. My basic position continues to be that the only way to solve the conflict is by implementing a two-state solution. The reason we cannot achieve that now is because of our two leaders, Netanyahu and Abbas. They are both held hostage by their supporters, and they are alienated from one another. There is no trust at all between them, and they are both focused on political survival. All of this, during the difficult wave of terrorism that we are experiencing. I’ve spent the last few months going from funerals for the victims of the current wave of terror to visiting their grieving families to console them. The whole experience has been so painful that it leaves me at a loss. Just this past Monday [Jan. 18] I attended, with so many others, the funeral of Dafna Meir [who was stabbed at her West Bank home]. The experience was excruciating. I could really feel the pain. On the one hand, it was a very banal situation, while on the other hand, it was so earth-shattering and painful. It was a kind of déjà vu.

Over the past few months, while working on these ideas, it became clear to me that our first priority must be to talk about security. This must come before everything else. That's the condition for everything else. Because once you have security, it becomes easier to talk. The first thing I want to do is restore calm. The final peace will have to wait. What we need is security now.

Al-Monitor:  So do you agree with Netanyahu and [Yisrael Beitenu leader] Avigdor Liberman that President Abbas is not a partner for peace?

Herzog:  ​I examined the issue in depth with Netanyahu after the election and reached the conclusion that he is not heading in the right direction. He would never meet my requirements, because he is afraid to budge. I met with Abbas last August and there, too, I am sorry to report, I didn't find the courage or leadership skills needed to agree to painful concessions. Extremists on both sides set the tone, like mirror images of each other. With whom will we reach an agreement on a two-state solution? Right now, Abbas represents only part of the Palestinians. What about Gaza? Are we going to have three states? Let’s say three states for two peoples. My conclusion was that the two men are paralyzed by fear. All they want to do is to survive, so there is no chance of them being at the forefront of any brave moves. That is also the background for what is being called the “third intifada” breaking out. I warned Abbas about it then.

Al-Monitor:  Netanyahu and his government talk about security all the time. How are you any different from them?

Herzog:  I do not want to annex Judea and Samaria, and I do not want to rule over 3 million Palestinians. The basic principle is separation from the Palestinians. We should separate wherever it is feasible. That will increase security. We should complete the fence around the settlement blocs. Us here, and them there. That will lower the level of terror immediately. [Former Prime Minister] Ariel Sharon did it successfully. The separation wall will reduce terrorist attacks, and each of us will be able to go on with his life.

I suggest withdrawing from 28 Palestinian villages surrounding Jerusalem and building a wall that will keep them out of the city. We don’t need hundreds of thousands of Palestinians in our capital. [The East Jerusalem neighborhood of] Issawiya is not part of the “eternal capital of Israel,” nor is the [nearby] Shufat refugee camp. By doing this, we will reduce the level of friction. Anyone who wants to work here will have to receive permission from the various security agencies. I don’t describe this as a diplomatic measure. It is a security measure. What I am saying is that peace is unobtainable right now, so let’s achieve security so that we can talk about peace.