Accusations by the spokesman of the forces of retired Maj. Gen. Khalifa Hifter that Hamas has provided technical support to some armed groups in Libya are rebutted and mocked by Palestinians amid a lack of evidence of Hamas’ involvement in the North African country. 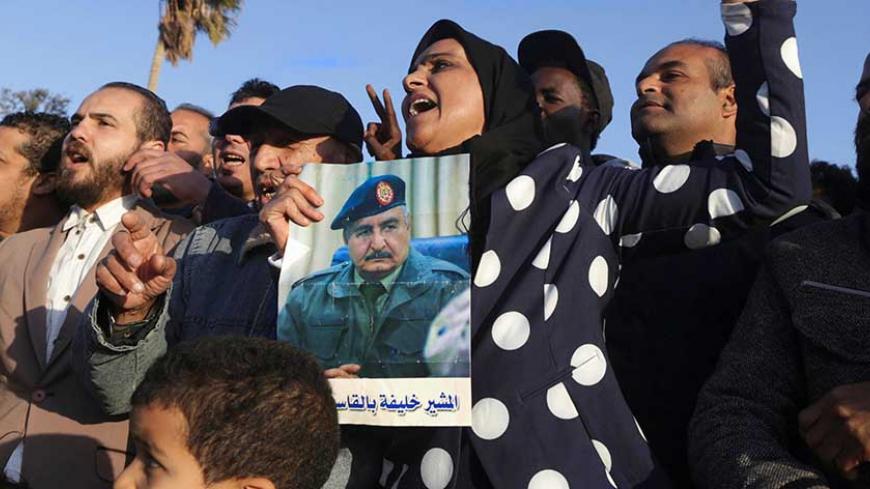 An onslaught by Arab media outlets against the Hamas movement has gained momentum in the wake of the escalation of the Gulf-Qatar crisis.

On June 8, the spokesman for the Libyan National Army led by Gen. Khalifa Hifter, Ahmad al-Mesmari, accused Izz ad-Din al-Qassam Brigades, the military wing of Hamas, of training extremist members in Libya in the methods of booby-trapping and bombing.

At a June 8 press conference in Tripoli, Mesmari showed video footage of training and educational materials — on how to manufacture explosive devices and use machine guns — which he said belonged to members of the al-Qassam Brigades and which were allegedly found in the possession of captured extremist members in the Libyan city of Benghazi. He also accused the al-Qassam Brigades of providing technical assistance to terrorists on Libyan territory.

Hamas denied and rebuked all of these accusations. Hamas spokesman Hazem Qassem told Al-Monitor, “These fabricated allegations by the spokesman of the Hifter forces aim to tarnish the reputation of the Palestinian resistance, which is defending the Palestinian people against Israel.”

He said, “Everyone knows that Hamas’ resistance activities are restricted to the Palestinian territories only. None of the many accusations leveled against Hamas by some Arab parties of being involved in acts hostile to any country have been proven so far.”

In the same context, a Palestinian security source denied to Al-Sa'a 8 news website June 8 that there had been any intervention by al-Qassam Brigades in Libyan territory, adding that the allegations made by Mesmari are not based on any conclusive evidence proving the involvement of any soldier from the al-Qassam Brigades in the conflict in Libya.

Abu Mujahid, a spokesman for the Popular Resistance Committees, told Al-Monitor that Hifter's forces will have to bear the consequences of the accusations made by their representative against Hamas. “The smear campaign by Arab parties against Hamas aims to win over the United States and Israel,” he said.

He noted that the accusations aim to justify the campaign against Qatar under the pretext of supporting Hamas and the Muslim Brotherhood and other groups in Syria such as Ahrar al-Sham and Jabhat al-Nusra.

He added, “This took place after the US-Islamic summit held in Riyadh on May 21 and attended by US President Donald Trump and Arab and Muslim leaders. In his speech at the summit, Trump accused Hamas of being a terrorist organization.”

This is not the first time Hifter forces have made such accusations against Hamas. On Jan. 6, they accused Hamas of spying on their military positions in Libya, which the movement denied.

Thousands of Palestinian social media activists used the Arabic hashtag that translates into "Hamas_is_Resistance­_Not­_Terrorism" in response to the accusations and in support for Hamas and the Palestinian resistance against the smear campaign launched against them by Arab media outlets, mainly in Saudi Arabia and the United Arab Emirates.

"Hifter forces’ accusations leveled against Hamas aim to prove these forces’ loyalty to the United States and some of its Gulf allies,” he said. He added that the current alliances taking shape in the Arab region do not support resistance movements.

Mustafa al-Sawaf, a political analyst and former editor-in-chief of Felesteen newspaper, told Al-Monitor, “Accusations by the Hifter forces against Hamas are part of a smear campaign by the UAE, Saudi Arabia and Egypt to demonize Hamas through false accusations. The current Egyptian regime and the regime of President Hosni Mubarak also made similar accusations against Hamas.”

Sawaf described Hifter and his forces as tools manipulated by Arab intelligence services to play pre-assigned roles, pointing out that Hamas intervention in any hostile action in any Arab country has never been proven.

He said Arab regimes are afraid of openly classifying Hamas as a terrorist movement out of fear of the general Arab public opinion, which considers Hamas to be a resistance movement seeking to liberate its land from Israel and that has nothing to do with terrorism.

The smear campaign against Hamas raised concerns among Palestinians, who see the accusations as a preliminary step in the plan to tarnish the image of the Palestinian resistance and alienate the regimes that support it, and thus give Israel a justification to abolish it.