Palestinians wary of talk Gaza may be declared 'rebel district'

The poor living conditions and security situation of Palestinians in the Gaza Strip could further deteriorate if Palesinian President Mahmoud Abbas declares Gaza a "rebel district." 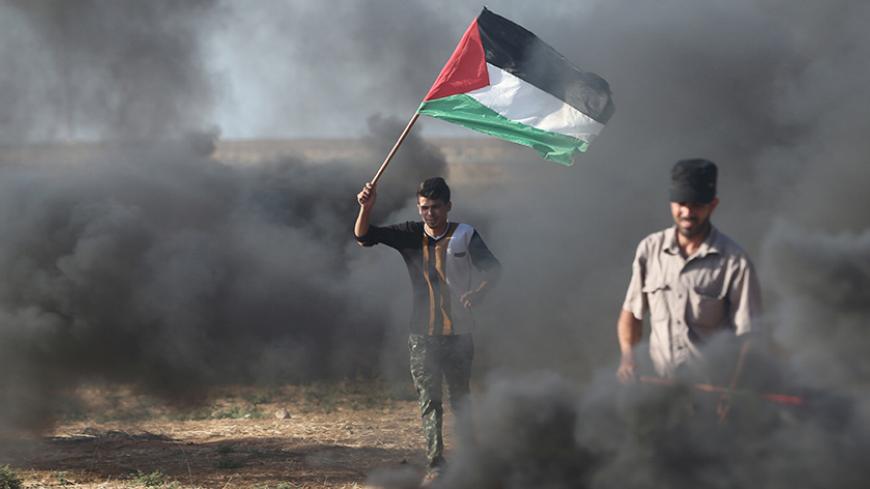 A protester holds a Palestinian flag during clashes with Israeli troops at a protest against reducing the power supply to Gaza, near the border with Israel in Khan Yunis, Gaza Strip, June 20, 2017. - REUTERS/Ibraheem Abu Mustafa

The official, a close associate of Abbas, said that president is using the move against Hamas in the internal Palestinian conflict to pressure the movement to hand control of Gaza over to the Palestinian Authority (PA).

The newspaper said the move is a “doomsday weapon” and that “implementing the plan would mean immediately declaring a state of emergency throughout Gaza while simultaneously issuing emergency orders designating certain groups and movements as 'rebels.' In such an event, Hamas would be outlawed and all its assets — including institutions, funds and bank accounts — will be frozen. In addition, arrest warrants will be issued against the heads of the organization."

The official said that a team of Palestinian Justice Ministry legal experts has been established to review how to implement the plan legally, both in terms of Palestinian law and international law.

Ahmad Hassaniah, the dean of the faculty of law and professor of constitutional law at Gaza University, told Al-Monitor that the declaration of the Gaza Strip as a rebel district would have serious legal repercussions. Chief among these is that Gaza would no longer be under Palestinian authority and would be subject to the control of “gangs.”

Hassaniah said, “By making such a move, Abu Mazen [Abbas] would be calling on the entire world — including the United States and Israel — to help him regain [control over] this district, which has spun out of the legal control of the PA.”

He noted that this measure could result in “successive decisions,” namely the evacuation of all the international organizations in Gaza and the shutting down of financial institutions such as banks, as these fall under the state's sovereignty. This would also lead to the exit of these institutions from the Palestinian economy, expediting the collapse of the economy in Gaza and leading to more suffering.

The more important legal dimension that will exacerbate the suffering of Gazans, according to Hassaniah, is that the work of the United Nations Relief and Works Agency for Palestine Refugees in the Near East (UNRWA) would come to a halt, which would leave Palestinian refugees in the Gaza Strip without a source of income.

An economic report published by the official Palestinian news agency WAFA in May showed that 60% of the total Palestinian population in Gaza receives aid from UNRWA.

“If this [rebel district] is declared, then Palestinian citizens in Gaza will revolt in a rebel district, and the PA would not be responsible for their protection,” Hassaniah said.

He said that this would be contrary to the Palestinian Basic Law, which authorizes the sovereign authority governing the country to protect all Palestinian citizens. Article 84 of this law stipulates that the functions of the security forces “are limited to defending the country, serving the people, protecting society and maintaining public order, security and public morals.”

While Al-Monitor tried in vain to contact officials from the PA and Fatah to comment on this move, the PA has not formally denied reports that Abbas is considering the step.

The announcement of this move coincided with the passage of 10 years of Hamas' takeover of Gaza by military force on June 14, 2007.

Hossam Dajani, a writer and political analyst and professor of media and politics at Ummah University in Gaza, said that the essence of the rebel district declaration scenario infers the cessation of all PA services provided to Gaza, most notably communication with both Israel and the international community, approving new pay cuts for PA employees in Gaza to further pressure Hamas; reducing the allocations provided to the families of prisoners, the wounded and people considered to be martyrs; stopping medical treatment abroad covered by the PA; contributing to the cutting of electricity; and reducing the work of the banking sector.

Dajani told Al-Monitor that one of the most important repercussions of the declaration of Gaza as a rebel district is the withdrawal of international organizations from the Gaza Strip because this would give Israel the chance to put pressure on such organizations to dismantle their work. “If such a scenario unfolds, Gaza would be facing a full-fledged disaster and the future of the Palestinian national project would be at stake.”

This is why, Dajani added, the chances of such a scenario rolling out are minimal amid the serious consequences it would have on the people and the national project. “Therefore, I do not expect its clear and explicit application given its legal implications,” he said.

Dajani expects Abbas to only adopt further measures and sanctions against Hamas without going so far as to declare Gaza a rebel district. Dajani said some Palestinian factions would reject this scenario if Abbas was forced to take it.

“Such a refusal will not have any real impact given that President Abbas monopolizes the Palestinian decision-making process,” he said. He reiterated that Abbas would not risk declaring Gaza a rebel district because that would deal a blow to the Palestinian cause.

Regarding the future of the Gaza Strip in the event of such a declaration, Dajani said that it would be contending with two options: either a popular explosion or an armed confrontation against Israel.

Azzam al-Ahmad, a Fatah Central Committee member, had called in a press statement in January 2015 for considering Gaza as a rebel district. “What happened in Gaza is not a coup, but a rebellion,” he said at the time in reference to the Hamas takeover of Gaza.

In 2007, the Israeli Cabinet declared the Gaza Strip a “hostile entity” after Hamas won the legislative elections.

Palestinians in the Gaza Strip are deeply concerned about the danger of Gaza being declared a rebel district at a time when the level of suffering is on the rise, thus warning of worsening living crises and a looming humanitarian catastrophe.