Due to the strong conservative culture in Iraqi Kurdistan, the LGBT community faces a difficult situation, but there are some signs of growing acceptance. 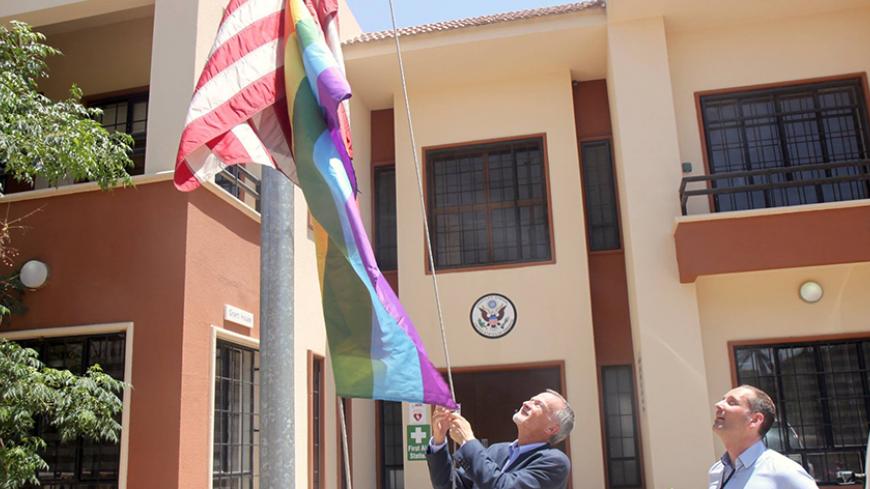 A rainbow flag is hoisted at the US Consulate in Erbil, Iraq. Posted June 1, 2017. - Facebook/erbil.usconsulate

ERBIL, Iraq — "My mother left the can of petrol in the room and gave me a lighter. As she stepped out, she said with a stern face, ‘I want to see flames coming from your body when you come out of this room.'" For 13-year-old Hawre, this was heartbreaking, as his only “crime” was being gay.

Hawre's face drops as he recalls the incident from 2002 in a quiet corner of a cafe in Sulaimaniyah. Things are not as bad as they used to be for Hawre, despite occasional degradation and humiliation that he and other gay individuals face from family members and strangers. Most of his friends have accepted him, his family has finally come around and made peace with his sexual orientation, and jobwise he is doing well in the media industry in this corner of the Kurdistan region in northern Iraq. Hawre said he knows about 30 other people who are gay and their suffering continues, often in silence.

It is not clear what the size of the LGBT community is in the Kurdistan region because most members hide their sexual identity and have no organization to represent them. They face regular abuse from family, friends and society in general. Technically speaking, they are engaging in “illegal activity” for having gay relations in the eyes of Iraqi and Kurdish law.

“Because the source of our laws in Kurdistan and Iraq is from Islamic Sharia, homosexuality is considered unlawful and un-Islamic, and therefore it is seen as a crime,” lawyer Shokhan Hama Rashid from the Women’s Legal Assistance Organization told a Kurdish TV channel. “This phenomenon [homosexuality] exists in Kurdistan, but it is hidden. … It is widespread amongst the youths and even among married couples.”

On June 1, the US Consulate General in Erbil took a stand for LGBT rights and hoisted the rainbow flag on the consulate compound in honor of Pride Month. The impact was immense. It received hundreds of comments on Facebook in Kurdish and English, creating a lively debate with many cursing the United States, the LGBT community and the Kurdish government. Many people argued that homosexuality was “alien” to the Kurdish culture.

Facebook is perhaps the most popular social networking site in the Kurdistan region, and it provides insight into how society perceives an issue such as homosexuality, which is considered a taboo subject. "As much as I love American culture and American people, the US government repeatedly tries to force their values on other people, this is why people dislike you!" wrote Mivan Mandalawi on the page. "You raise a flag that the people are against … what you did is the same as a Nazi supporter going to California and raising the Nazi flag, it’s not right."

Despite the abuse and twisted logic of some commentators, around one-third of the comments posted on the page were positive and pro-LGBT, according to the consulate assessment on the page. "I commend you for this action. Although the majority of Kurds/Iraqis might find this disrespectful, I am positive this hits close to home for many," wrote Hama Ali in support of the LGBT community.

"Of course I was pleased to see the flag raised," said Hawre. "It was brave, but I think there was criticism." The criticism came from the Erbil governor's office, the clerical establishment, the Islamic State (IS) and some from within the Kurdish community on Facebook.

"Congratulations, Kurdish state. American Consulate … raised the … symbol of homosexuality," read a sarcastic message on a popular Telegram channel that spreads IS propaganda. Hamza Hamid, the media officer of Erbil province, told a local outlet, "This is an attempt to distort the social norms in Kurdistan and defame Kurdistan culture … the governor has not given permission to any person, group or organization to behave like that." Several moderate clerics published a message on their Facebook pages denouncing the act and calling on the Kurdistan Regional Government to protest. "[Homosexuality] is unlawful in our region and it is forbidden in the eyes of the law and religion as well as custom."

As LGBT communities march across the Western world during Pride Month with relative ease, in Kurdistan, the LGBT community stays in the shadows and its members do not dare express any sentiment that identifies them as gay. "I fled my hometown of Dahuk after my three brothers tried to bury me alive," said Ahmad, an intersex person who asked for her real name to be withheld. "There is no one to turn to in this society."

"LGBT persons often faced abuse and violence from family and nongovernmental actors," warned the 2016 US Department of State Human Rights Report, in reference to Iraq. "In addition to targeted violence, members of the LGBT community remained at risk for honor crimes, since their conduct did not conform to traditional gender norms.”

Since the United States invaded Iraq in 2003, a large number of LGBT community members have been attacked and some even killed by vigilantes and militia groups while the Iraqi government turned a blind eye. Approximately 3,000 people were tortured from 1991 to 2003 by Saddam Hussein’s security forces for expressing their sexuality. Human rights organizations have repeatedly called on the government to prevent the abuse and mistreatment of the LGBT community under its international obligations.

The UN Human Rights Committee, which monitors governments’ compliance with the International Covenant on Civil and Political Rights (ICCPR), of which Iraq is a party, stated in a 2015 report: "Violence and discrimination against LGBT individuals in Iraq continue to flourish, and victims are guaranteed virtually no protection or redress. The government of Iraq has failed in its obligation under the ICCPR to take proper measures to give effect to the rights recognized therein, to ensure effective remedies in cases of violations, and to prevent systemic impunity.”

Long before IS threw men off tall buildings in Mosul for gay acts, gay men were killed and sometimes beheaded, and their genitals were cut off or glued by militias often with the blessing of the central government in Baghdad or government officials.

Despite the intolerance, there have been some positive developments: Last July, prominent Iraqi Shiite cleric Muqtada al-Sadr called for tolerance toward those who do not conform to gender norms. Gay activists have become more vocal about their rights. In recent months, two main TV channels in the Kurdistan region have aired programs dealing with the stigma and intolerance toward the LGBT community. While both programs had some shortcomings, it was nonetheless brave of the journalists and the channels' managers to address an issue that many see as taboo.

Hawre’s life is more stable, and he is now in a relationship. “I have to always be on guard, as you never know who will strike you next,” he said. I asked him if he thought that Kurdish society would one day accept him for who he is. "Perhaps by the time I am 60 years old," he replied.