Yesh Atid Knesset member Haim Jelin promotes a new lobby for offering Gaza residents a diplomatic horizon and hope in the form of developing infrastructure and addressing the humanitarian crisis in the Gaza Strip. 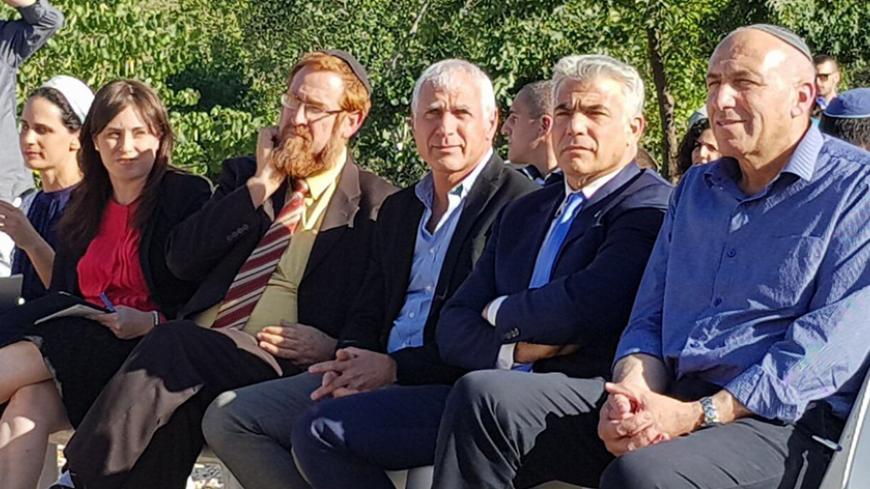 Coincidently, the launch of the "Diplomatic Vision for Gaza" lobby by Knesset member Haim Jelin of Yesh Atid on June 12 coincided with the intensification of the electricity crisis in the Gaza Strip. Based on an assessment presented by Israel's military chiefs to the Cabinet just a day earlier, the crisis could lead to more than just a humanitarian disaster. It could also result in a military escalation between Israel and Hamas, making the new lobby all the more relevant.

Almost three years have passed since 2014's Operation Protective Edge. While there is unanimity among the political and defense leadership that another round of fighting against Hamas in Gaza is only a matter of time, it is one of the least popular issues to deal with politically. The public actually prefers suppressing it entirely. Reports on what is happening in Gaza tend to be pushed to the bottom of the Israeli media agenda, with very few politicians advocating for any agenda to confront the issue. That is why the new lobby formed by Jelin is worthy of attention. As head of the Eshkol Regional Council (adjacent to the Gaza Strip) during Operation Protective Edge, Jelin became an iconic symbol of that turbulent summer.

Jelin focused on an issue that is of no interest to the Israeli public and that offers no immediate political gain. At a time when Culture Minister Miri Regev's populism captures all the headlines, Jelin is trying to foster a discussion about how there may be a way to avoid another round of fighting in Gaza.

What Jelin said June 12 was simple, and it made a lot of sense: "Gaza is a ticking time bomb, Israel's patchwork policy will not help mitigate the situation, and there is an obligation to institute a diplomatic vision that will stall repeated rounds of fighting and bring us closer to more enduring calm with Gaza.”

In his opening remarks to the lobby's first meeting, he also explained that "based on my vision but also my experience, in exchange for a seaport, the development of industrial zones, an easing of restrictions at the border crossings and access to Israel for Gaza laborers, Hamas will agree to forestall its military growth. … We must prevent a humanitarian crisis, which will gradually devolve into a military campaign against us and further unnecessary losses on the Israeli side."

Defense Minister Avigdor Liberman, who participated in the discussion, spoke about a strategy of rehabilitation in exchange for demilitarization. His keywords were patience, determination and consistency. He noted that Israel "has no plans to initiate a military operation, but we will respond with full force to any provocation." Hence, the question that must be asked is what Israel is currently doing to prevent the next round of fighting.

Yesh Atid Chairman Yair Lapid — who also participated in the discussion — recalled that immediately after Operation Protective Edge when he was still finance minister, "Israel needed a far-reaching policy in Gaza based on rehabilitation for demilitarization. We had a window of opportunity, in particular around the meeting of the donor nations in Cairo. For various political reasons, the government chose not to rise to the challenge."

Also present at the discussion was Transportation Minister Yisrael Katz of the Likud. In fact, he was the only participant who deals with the problem of Gaza regularly and creatively. At the gathering, Katz spoke about his idea of creating an artificial island off the Gaza coast. While he has been pushing this idea for several years now, he has not yet managed to win the support of the relevant policymakers. Katz said, "The State of Israel has been moving forward in a 'march of fools' since the disengagement from Gaza [in 2005] because there is no decisive policy regarding the Gaza Strip." Katz went on to repeat his proposal to create an international island, which would provide services, a port, desalinization and electricity, with the goal of rehabilitating Gaza economically.

Gaza may be a seething pressure cooker that is home to some 2 million Palestinians, but the level of interest in the problem as shown by the Israeli public and media is negligible. This could explain why politicians rarely focus on the issue or attempt to advance an effective agenda to deal with it.

Actually, following the 2005 Israeli withdrawal from Gaza back to the 1967 lines, there is no border dispute. In other words, this could be the ideal place to reach a diplomatic agreement mediated by the Arab states based on the principle of economic and civil rehabilitation in exchange for security. But it looks like Israel is not taking the initiative. As Lapid noted, there was a chance to move forward with such a move after Operation Protective Edge, but nothing significant actually happened, so that now the next fighting round is looming on the horizon.

The question really is: Why is the Israeli public showing such apathy and suppressing the possibility of another "hot" summer in Gaza, since this would inevitably mean more casualties, a general call-up of the reserves and an interruption of day-to-day life in the heart of the Israeli home front? It could be a classic case of the chicken and the egg: Are politicians failing to move ahead because of limited public interest, or is it the lack of initiative by the political leadership and the opposition in dealing with this issue that is causing it to be pushed to the sidelines of the agenda?

The past has shown that in similar instances, public opinion and interest can have a dramatic impact in motivating the political leadership to act. As the person closest at the time to Prime Minister Ariel Sharon — Dov Weisglass — had said, the Gaza disengagement plan was, among other things, the result of the Geneva Initiative (an effort led by the opposition left to reach a permanent agreement with the Palestinians, which was gaining momentum in Israel and internationally). Sharon felt like he was losing support due to the lack of any diplomatic initiatives after the second intifada from 2000-2005.

The Four Mothers protest movement, created after the 1997 helicopter disaster (in which 73 soldiers en route for Lebanon were killed) to advocate for a withdrawal from Lebanon, became a catalyst, placing the issue prominently at the forefront of the public, political and media agenda. With this support at his back, Ehud Barak of the Labor Party used his 1999 premiership campaign to pledge that he would withdraw from Lebanon within a year. He kept his promise in May 2000.

The same was true about the public campaign to bring about the 2011 release of abducted soldier Gilad Shalit. The mass movement that formed as a result made a significant contribution to the decision to obtain his freedom in exchange for the controversial release of some 1,000 Palestinian prisoners by the second Netanyahu government.

Will the country's political leadership come to its senses before the next round of fighting and make an effort to prevent it? Sadly, it looks like the public is not providing the decision-makers with the impetus to act in order to achieve that, at least at this stage. It seems as if the "deceptive" calm on the security front is hiding the risk of another round of fighting in Gaza. As if guided by destiny, Israel seems to be headed in that direction.