Israel has agreed to open the Allenby (King Hussein) border crossing into Jordan around the clock following bilateral negotiations with the Palestinians. 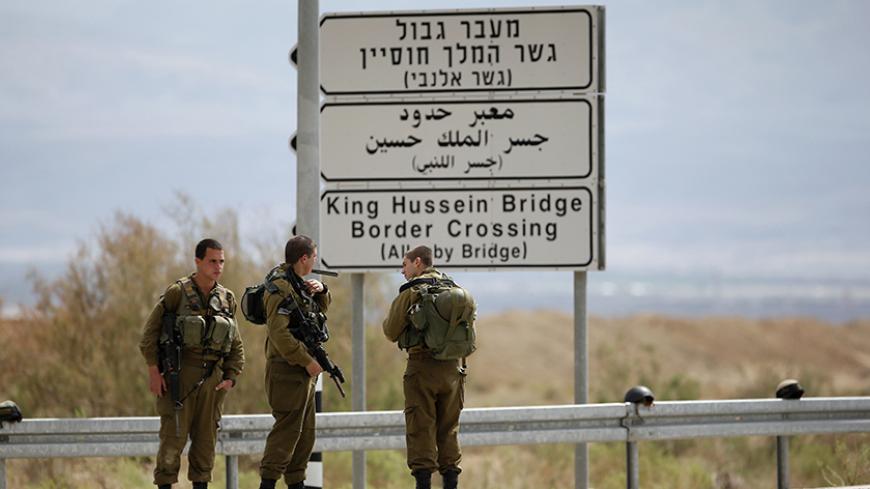 Israeli soldiers stand guard near the entrance to Allenby Bridge, a crossing point between Jordan and the occupied West Bank, near the town of Jericho, West Bank, March 10, 2014. - REUTERS/Ronen Zvulun

RAMALLAH, West Bank — During the high season extending from June 20 until the month of October, Palestinians in the West Bank will be allowed to travel to Jordan around the clock on weekdays. On Fridays and Saturdays, passage will be restricted to three hours from 7:30 a.m. to 10:30 a.m. through the crossing known as the Allenby Bridge and the King Hussein of Jordan Bridge, which links the Palestinian territories to the Hashemite Kingdom of Jordan. Following this trial period and once further preparations are complete, travel will be allowed around the clock all year long, starting in early 2018. The agreement to open the crossing was concluded in coordination between the Palestinian, Israeli and Jordanian authorities.

This development comes as part of an Israeli economic aid package provided to the Palestinian Authority. Gen. Yoav Mordechai, who heads Israel's Coordinator of Government Activities in the Territories, announced June 1 over Facebook that he had informed Palestinian Prime Minister Rami Hamdallah and Minister of Civil Affairs Hussein al-Sheikh at a meeting held May 31 in the presence of Israeli Finance Minister Moshe Kahlon of Israel's approval of a number of economic concessions to the Palestinians, including the opening of the Israeli Allenby crossing for 24 hours a day.

The concessions also included the revival of the Joint Economic Committee, reconsidering the Paris Protocol, expanding the prerogatives of the Palestinian National Authority in Israeli-controlled Area C and establishing an industrial zone in Tarqumiyah in Hebron governorate with a customs clearance area and oil and gas reservoirs.

PA spokesman Yousuf al-Mahmoud told Al-Monitor that reaching an agreement to open the crossing around the clock would facilitate the travel of citizens and would serve their economic interests, especially in the summer, when travel from and to the Palestinian territories peaks.

Mahmoud stressed that for years, the PA has been asking Israel to keep the crossings operational around the clock, but the Israeli crossing authorities kept denying the request, saying that a political decision was needed for such a step and that it was up to the Israeli government to decide on the matter.

Asked about the reasons that led Israel to allow the opening of the crossing, Mahmoud said, “The Palestinian government held serious talks with the Israeli authorities and several international bodies [the United States, the European Union and the Middle East Quartet] and explained the need to have it operational around the clock. The parties examined the Palestinian request and pressured Israel to approve the demand.”

The crossing is currently open from 7:30 a.m. to 9:30 p.m. Sunday through Thursday and from 7:30 a.m. to 10:30 a.m. on Fridays and Saturdays. However, with the increase in the number of travelers each year, especially during the hajj and umrah seasons, the seasonal holidays and the annual summer holidays, a traffic crisis at the crossings seems to be looming.

Last year, more than 1.8 million people traveled from and to the Palestinian territories, an increase of 200,000 people compared to 2015.

Nazmi Muhanna, the PA's director-general for border crossings, told Al-Monitor, “The agreement with the Israeli side came as a result of discussions that Minister of Civil Affairs Sheikh and I have conducted with the Israeli staff working on the crossings based on the instructions of President Mahmoud Abbas and Prime Minister Hamdallah in order to simplify travel procedures and reduce the long hours of wait at the crossings.”

Muhanna stressed that the number of travelers from and to the Palestinian territories has significantly increased over the past three years, creating great pressure on the crossings and making the current working hours insufficient.

Asked about the reasons behind Israel's approval of the Palestinian request, Muhanna said, “The Israeli side is working with us on the crossings, and it has been responsive given the conditions plaguing travelers and the increasing number of people seeking to travel. Also, the brothers in Jordan welcomed the idea of having the crossings operational around the clock and an agreement has been reached in this regard.”

Muhanna stressed that the current agreement is one positive step to be followed by several other ones. Once the agreement is implemented, the commercial crossing’s round-the-clock operational mechanisms will be discussed between the Palestinian territories and Jordan.

On March 28, the Palestinian Cabinet approved the formation of a legal committee tasked with supervising the development of the crossing and its future work and setting the necessary plan. The committee comprises the Ministry of Finance and Planning, the Ministry of Local Government, the General Secretariat, the Palestinian Land Authority and the Department of Border Crossings.

The Department of Border Crossings Is about to complete its infrastructure expansion for the round-the-clock plan. The upgraded services will include public bathrooms and indoor parking structures to allow the crossing to accommodate 3.5 to 4 million travelers annually.

In addition to the infrastructure development, Muhanna revealed the addition of an electronic pre-registration system that will be officially announced when the 24-hour-system begins. The electronic system will allow travelers to book appointments on the website of the general administration for border crossings as well as via a smartphone application. This system will help the staff working at the crossing identify and prioritize those with urgent travel needs.

Muhanna stressed that the logistics for the 24-hour system are being coordinated with the Jordanian and Israeli sides.

“I am in constant contact with the Israelis and the Jordanians. There is a great understanding among us all, and we are working to provide an excellent service to travelers.”