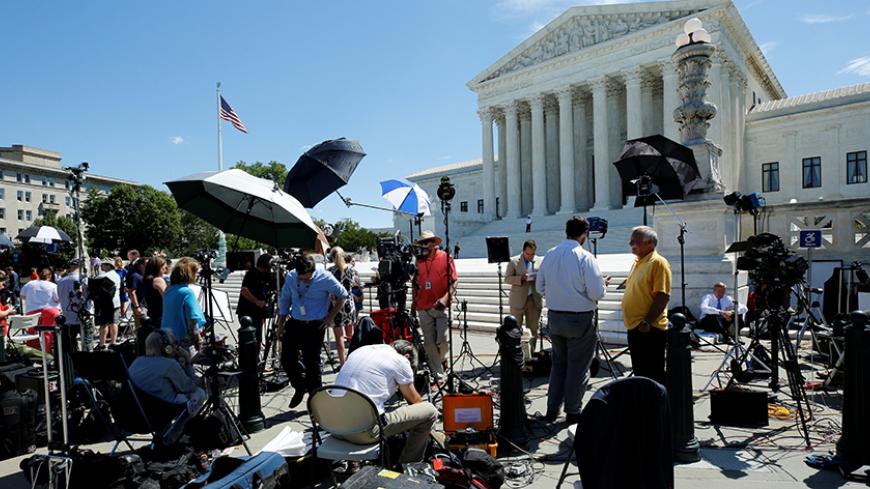 Reporters wait outside the US Supreme Court in Washington before it granted parts of the Trump administration's emergency request to put his travel ban into effect immediately while the legal battle continues, June 26, 2017. - REUTERS/Yuri Gripas

The US Supreme Court’s decision to revive part of President Donald Trump's travel ban imposed on citizens from six Muslim-majority countries, including Iran, has angered Tehran, with parliament members accusing the White House of violating the Joint Comprehensive Plan of Action (JCPOA) nuclear deal reached in 2015 between Iran and the P5+1 nations (China, France, Russia, the United Kingdom, the United States and Germany).

Mentioning the travel ban, Seyyed Hossein Naghavi Hosseini, the spokesperson for the Iranian parliament's National Security and Foreign Policy Commission, said June 26, “Trump has a racist attitude that will cause his country to suffer. … As nations do not accept racial and ethnic discrimination today, the American policy will end up in a dead end.”

Noting the suspension of the issuing of visas for Iranians as a clear violation of the nuclear deal, the Iranian parliament member added, “In the post-JCPOA period, no negotiating states must apply new restrictions and sanctions against Iranians. Many of the travels between the two countries were done due to scientific, research and academic issues and should not be prevented.”

Moreover, in reaction to the US Supreme Court’s decision, Iran’s Foreign Minister Mohammad Javad Zarif tweeted June 27, “A bigoted ban on Muslims will not keep US safer. Instead of policies empowering extremists, US should join the real fight against them.”

Furthermore, on June 28 the spokesperson for Iran’s Foreign Ministry criticized the White House for ignoring the “major perpetrators of the terrorist acts in the US.” Bahram Ghassemi said June 28, “Although the Supreme Court’s decision is temporary and will be revised in October this year, this also reflects the decision of the sovereign government to behave in a discriminatory way toward Muslims and have an unfair view about them, which is contrary to the claims made by the US administration.”

In remarks that can be interpreted as directly targeting Saudi Arabia for its alleged role in 9/11, Ghassemi continued, “It is regrettable that the US government is ignoring the major perpetrators of the terrorist acts in the US and gives [the world] a wrong address in pursuit of its shortsighted economic and business goals.”

Adopting the same approach as Ghassemi, Heshmatollah Falahatpishe, a member of the Iranian parliament's National Security and Foreign Policy Commission, opined June 28, “Iranians have never perpetrated any terrorist attacks against Americans. This is a political decision, and it is a green light to the regional allies of the US, which has negative effects on the JCPOA and are among the policies being done with the aim of preventing Iranians from making use of the advantages of the JCPOA.”

In other news, on June 27 US press secretary Sean Spicer said that the United States had “identified potential preparations” for an attack “that would likely result in the mass murder of civilians, including innocent children.” He added that Syrian President Bashar al-Assad would “pay a heavy price” if they go ahead with the alleged plan. This prompted Iran’s foreign minister to tweet June 27, “Another dangerous US escalation in Syria on fake pretext will only serve ISIS [the Islamic State] precisely when it's being wiped out by Iraqi and Syrian people.”

Warning about any US unilateral move, Ali Shamkhani — the secretary of the Supreme National Security Council of Iran — said June 28, “Undoubtedly, America's unwise and adventurous behavior in Syria is a clear sign of playing with fire.”