Iranian media is abuzz with reports of Rouhani’s attempts to rally Europe to stand up against Trump’s efforts to kill the nuclear deal. 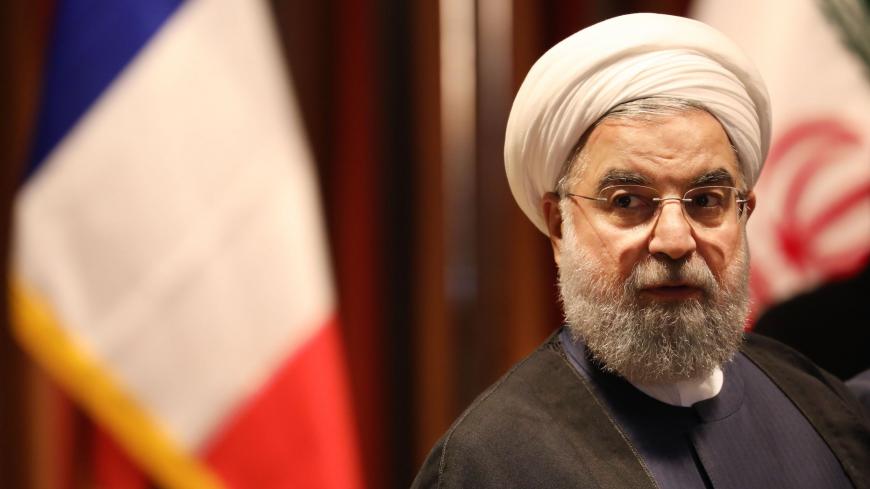 Iranian President Hassan Rouhani waits for the arrival of his French counterpart at New York's Millenium Hotel for a meeting on Sept. 18, 2017, on the sidelines of the UN General Assembly session. - GETTY/Ludovic Marin

Iranian President Hassan Rouhani left Tehran for New York on Sept. 17 to attend the UN General Assembly session. His brief but important visit serves Iran with an opportunity to hold talks with some of the leaders of the countries with whom Iran signed the nuclear deal. Rouhani hopes to persuade them to stand up to US President Donald Trump, who has vowed to scrap the landmark accord.

The first time Rouhani went to the United States was following his election in 2013. Back then, remarkable decisions and occurrences happened, such as his unprecedented phone call with then-US President Barack Obama — a brief conversation that has been described as the stepping stone for the 2015 nuclear deal. The interactions between Tehran and Washington persisted during Obama’s presidency, but with Trump taking over the White House this year, Iran and the United States have gone back to square one, and ties are getting tense as the new resident of the White House has repeatedly threatened to tear up the nuclear deal.

Knowing the importance of Rouhani’s trip to the United States, Iranian news websites and newspapers are covering the president’s meetings and are asking politicians’ opinions about this.

Noting the negative view of Trump’s team toward Tehran,  Mohammad Hossein Malaek — the former Iranian ambassador to China under President Mohammad Khatami — said Sept. 19, “Trump will attempt to put Iran at a defensive position [at the UN]. During the past four years, members of Mr. Rouhani’s government have managed to attract the attention of the public opinion and [establish] an effective interaction with the media by relying on peaceful talk, but it is likely that this year’s presence [of Rouhani] will be affected by the extensive propaganda of the Trump government.”

The Iranian government is hoping that holding negotiations with heads of European states will help them, as the US government is lobbying against the Joint Comprehensive Plan of Action (JCPOA).

Malaek said, “Taking advantage of bilateral meetings [on the sidelines of the UN General Assembly session] can turn the page in favor of Iran. Trump has launched an offensive regarding the JCPOA and will use the atmosphere to make the European countries accompany [it against Iran]. [Therefore], Iranian officials should seize the opportunity of bilateral meetings to defend their position on the JCPOA.” He added, “Given Iran's commitment to fulfill its obligations under the JCPOA, the Europeans will certainly resist [the US] pressures. … Mr. Rouhani and Mr. [Mohammad Javad] Zarif have been doing well in the diplomatic arena to bring Europe closer to Iran.”

Moreover, moderate Heshmatollah Falahat Pishe stated Sept. 19, “In the course of [Rouhani’s] visit [to the United States], the president must undoubtedly engage in [talks] to resolve the issues of the JCPOA and to make the necessary consultations with the authorities of the European countries in this regard.”

Emphasizing the significance of Rouhani’s meetings with heads of state, Falahat Pishe continued, “If we reach our goals with the JCPOA on the sidelines of the UN General Assembly, then we have definitely achieved a great win.”

Mentioning the Sept. 20 ministerial meeting of the Joint Commission between Iran and the P5+1, Javid Qorbanoglu, a former senior diplomat with Iran’s Foreign Ministry, wrote in the reformist Shargh Daily on Sept. 18, “Zarif is going to meet his counterparts, while Yukiya Amano — director general of the International Atomic Energy Agency — has emphasized in its reports Iran’s respect for its commitments to the JCPOA. … In contrast, the illogical and adventurous approach of Trump has put the [United States] in a standoff.”

He added, “For the first time in the history of global relations, America has been isolated on an international issue. Iran has at least the support of five countries of P5+1, and [they are also] in serious disagreement with the anti-JCPOA approach of the United States."

Apart from the JCPOA issue, Iranian figures expect Rouhani to bring up the crises in the Middle East such as the Yemeni and Syria issues as well as the Rohingya Muslims ordeal in Myanmar. “Myanmar’s issue should be on top of the president’s agenda. On the other hand, unity and integrity of the Iraqi states are critical to the Islamic Republic of Iran because Iraq is the neighbor of Iran," said conservative parliament member Seyyed Hossein Naghavi Hosseini on Sept. 19.

He added, “The issue of the referendum in Kurdistan is a new sedition that has been launched by some countries. Therefore, this should be raised by the president at the United Nations."