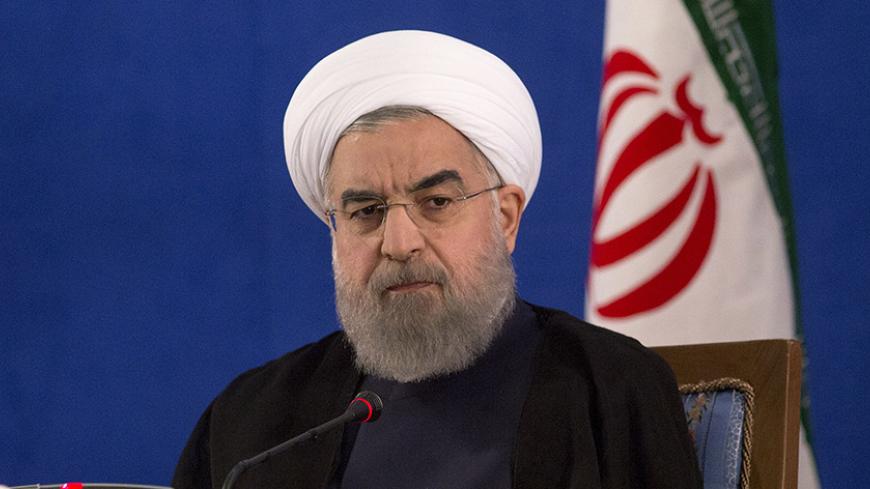 On June 23, Iranian hard-liners once again attacked moderate President Hassan Rouhani, but this time was different. A group of hard-liners approached the president and chanted harsh slogans while he was marching in the streets to mark International Quds Day.

Every year, Iranians take to the streets on the last Friday of the month of Ramadan to decry Israel for “occupying Palestinian lands.” Various figures, including high-ranking officials, take part in the marches, but this time, a group of hard-liners came close to the president and chanted slogans against him that were interpreted as impolite and insulting. Among the slogans shouted at Rouhani, who was re-elected by a landslide on May 19, were “The American sheikh,” “Rouhani, Banisadr, congratulations on your linkage” (in reference to Abolhassan Banisadr, Iran’s first president who was impeached and later exiled), and “Down with hypocrites” (in reference to the outlawed opposition group Mujahedeen-e-Khalq).

Minutes after the attack, Rouhani’s supporters on social networks backed him, using the hashtag “I’m a supporter of Rouhani,” which became a top trend on Twitter on June 23. In fact, every time the hard-liners have attacked Rouhani, the atmosphere has turned in favor of him, as many of his supporters become mobilized on social networks and denounce the attacks. Furthermore, the attacks of hard-liners are sometimes so harsh that even critics of Rouhani, including conservatives, rally to his side.

Reformists and moderates soon pointed their fingers at conservatives and hard-liners who had lost the election to Rouhani. In this vein, some conservative figures tried to exonerate their camp from this controversy. This, in turn, portrayed the hard-liners as more violent in the eyes of ordinary people and labeled the conservatives as “unity breakers.” In fact, moderates and Reformists opined that instead of demonstrating unity and condemning Israel on International Quds Day, the hard-liners served Israel’s purposes by breaking the unity sought with such marches.

Conservative cleric Mohammad Taghi Rahbar slammed the group of hard-liners who chanted slogans, saying that they aren’t “real Hezbollahis [hard-liners],” distancing them from the Principlist camp.

Moreover, as Reformists and moderates stated that the chanting of slogans against Rouhani was pre-planned and organized by the hard-liners, conservative Gholam Ali Haddad-Adel described the mob as ordinary people and said people were critical of Rouhani, but they had to express it politely.

Some of the hard-liners believe that their actions were based on the supreme leader’s comments and quote his recent remarks on June 7: “I constantly say to all intellectual, thinking jihadi and cultural nuclei throughout the country that each of them should work in an independent manner. As is said in military arenas, ‘fire at will’ when they want. Of course, during a war, there is a command center that issues orders, but if the command center cannot contact other bases and centers, the commander issues the ‘fire at will’ order. Well, you are the officers of the soft war. You are supposed to be the officers of the soft war. Whenever you feel that there is something wrong with the central organization and that it cannot work properly, you are free to fire at will. Under such circumstances, you are free to decide, to think, to move and to act.”

A few days after the supreme leader’s speech, the conservatives tried to correct what they believed to be a “misinterpretation” of his remarks by hard-liners. Asadullah Imani, the Friday prayer leader in Shiraz province, said June 18, “‘Fire at will’ doesn’t mean chaos.”

Following the new attack on Rouhani, conservatives sought to distance themselves from the group who chanted the slogans. In this vein, on June 24, the ultra-conservative Javan newspaper described the group of hard-liners who were chanting as “superficial.” The daily also wrote that what the hard-liners did against Rouhani turned the atmosphere in favor of the moderate president.

On June 26, in reaction to the hard-liners’ behavior against the president, the supreme leader tried to explain his previous remarks, saying, “‘Fire at will’ does not call for anarchy; it does not mean giving opportunities to those making thoughtless claims against the country’s revolutionary movement.”

However, three days after the events on International Quds Day, a few minutes before the beginning of Supreme Leader Ayatollah Ali Khamenei’s speech at the Eid al-Fitr prayers, a eulogist recited a poem against Rouhani and the Joint Comprehensive Plan of Action.

The poem and eulogist were both criticized by Reformists and moderates who thought the poem was insulting. Although, in a move that shows that such harsh verbal attacks against Rouhani will persist, the conservatives defended the poem and the eulogist, who was described as 2017 presidential election conservative candidate Ebrahim Raisi’s eulogist. In this vein, hard-line activist Vahid Yaminpour tweeted June 26, “The poem of Meysam Motei [the eulogist] had a big difference from the slogans of Quds Day [against the president], and that is the neatness [of it]. Fire at will means [doing] a neat work.”