Iranians debate whether to take advantage of Qatar crisis

The crisis surrounding Qatar has caught the attention of Iranian media, with debate emerging about whether to take advantage of Doha’s isolation from its Arab neighbors. 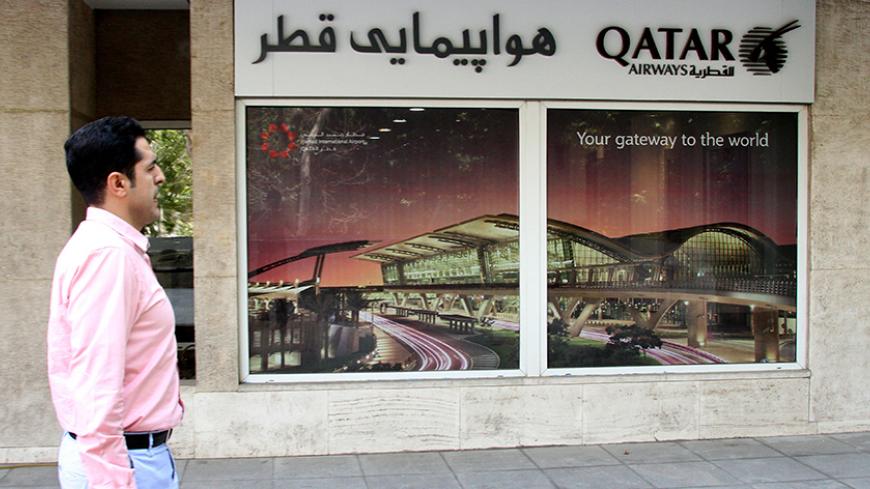 The crisis involving Saudi Arabia and its allies against Qatar has caught the attention of Iranian media, with many outlets considering the crisis an opportunity for Iran's struggling economy while also warning the government not to take any sides in the "war among sheikhs."

The first reaction in Iran came from President Hassan Rouhani's deputy chief of staff for political affairs Hamid Aboutalebi, who almost took Qatar's side. “The rift and collapse of the [Saudi-led Arab] coalition are the results of the sword dance [of US President Donald Trump and Saudi rulers] in Riyadh. … The age of playing the role of Big Brother is over. … The age of sanctions is over, too, and cutting diplomatic ties, closing borders, blockading countries, expelling members from the coalition … are not the way out of the crisis,” tweeted Aboutalebi June 5. Meanwhile, Bahram Ghassemi, the spokesperson for Iran's Foreign Ministry, took a neutral stance, saying June 5, "The solution to differences among regional countries, including the current dispute between Qatar and its … neighboring states, is possible only through political and peaceful methods as well as transparent and explicit dialogue among the involved parties."

Under the title "The tribal offensive of the Saudis and their partners against Qatar," hard-line Vatan-e-Emrooz wrote June 6, "Qatar has suddenly become isolated by its [four] neighboring countries. Saudi Arabia, Egypt, the [United Arab] Emirates and Bahrain cut their diplomatic ties with Qatar under the pretext of Qatar's support for terrorism, interfering in the internal affairs of Arab countries, threatening [Arab countries'] national security and harboring extremists."

Mentioning Trump's recent trip to Saudi Arabia, conservative Kayhan wrote that the plan for an "Arab NATO" has been torn apart. "The story started when the Qatari emir supported Iran and Lebanese [group] Hezbollah. This raised the eyebrows of the House of Saud, and it even threatened Doha with a coup. … Saudi Arabia made a strange decision and cut its ties with one of the countries of the Persian Gulf Cooperation Council [GCC]. This measure means the cancellation of the ‘Arab NATO’ plan [devised by the] House of Saud and America, and practically the Persian Gulf Cooperation Council has faced a major [internal] crisis," Kayhan argued June 6.

Moreover, state-run newspaper Iran wrote June 6, “Around two weeks ago, when US President Donald Trump went to Riyadh as the head of the White House, perhaps many international observers had realized that a strange and behind-the-scenes agreement had been reached, but few may have assumed that this behind-the-scenes agreement would lead to the isolation, surrounding and sanctioning of Qatar. … The tensions have heightened to a degree that may lead to the collapse of the Persian [GCC] and may [result in] Qatar and Oman leaving the [GCC] and establishing a parallel council.”

Comparing the Qatari crisis with the outrage over the attack on the Saudi Embassy in Tehran in early 2016, Reformist Shargh Daily wrote, "This issue was designed and led by Saudi Arabia. It is like the same measures that Saudi Arabia took following the attack on [the embassy of] Saudi Arabia in Tehran. On the heels of this event [the embassy attack], Saudi Arabia persuaded a group of Arab and African countries to cut ties [with Iran]. On the one hand, bribery, and on the other hand, playing the role of godfather and other tricks, provided Saudi Arabia [with the ability] to do this.”

The Reformist daily also encouraged the government to take advantage of the situation and enhance economic ties with Qatar. "The small but wealthy country of Qatar has come under siege. Currently, all the waterways and airspace is closed on Qatar and the only remaining way for Qatar is Iran," wrote Shargh.

Moreover, Reformist Etemaad daily urged the government to increase the volume of its trade with Qatar. "Following the decision of big Arab countries to cut ties with Qatar, it seems that the situation is ready for Qatar to enter a new phase of increasing its cooperation with Iran. Iran and Qatar already have a diplomatic relationship and embassies in the [respective] countries, and approximately 30,000 Iranians live in Qatar. … Under the new circumstances, the relationship between the two countries will be different. The [time is right for the establishment of] ties that can fill the void of the countries that don't want to have trading ties with this small Arab country anymore," wrote Etemaad June 6.

Meanwhile, some Iranian analysts and former diplomats have demanded that the government not take Qatar's side. Qassem Mohebali, the former head of the Middle East desk in Iran's Foreign Ministry, said June 5, "Qatar has been a part of [a] plan and game [that] have endangered Iran's security and interests in Syria and Iraq. … Qatar is not an innocent country, and we shouldn't take Qatar's side. We should note that Qatar supports terrorism."

Mohebali added, "It is unlikely that Iran [will] step into the crisis. This measure is not logical, as it may accelerate the [process of both sides] resolving the issues [which is not in Iran's best interests]. … However, Iran is ready to solve the disagreements if Qatar or the other sides [are willing]."