A review of interest rates for bank deposits in Iran shows widespread violations of the interest rate ceiling ordered by the Central Bank of Iran. 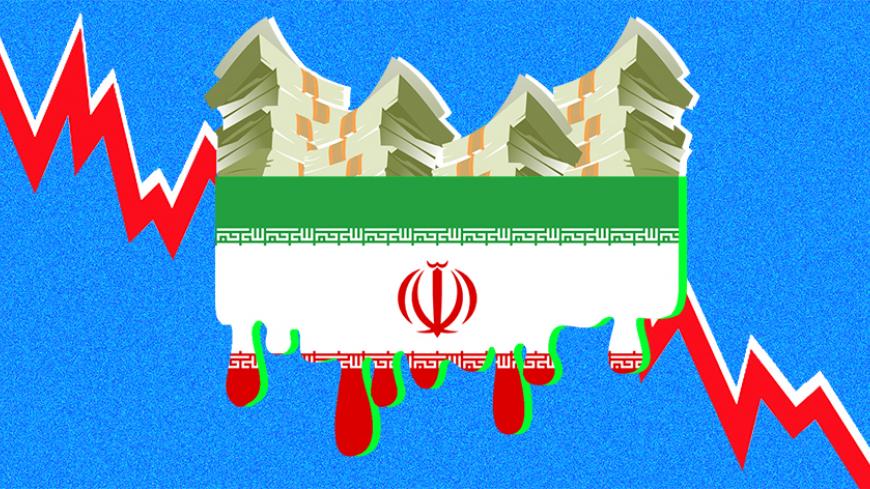 Iranian media reports show that many banks and credit institutions are violating a decision made last June by the Money and Credit Council, the highest policymaking body of the Central Bank of Iran, in regard to the interest rate for deposits. The council capped the rate at 15% and threatened banks with disciplinary actions should they ignore the decision. Yet 90% of banks have failed to comply with the mandate since then, leading economic newspaper Donya-e Eqtesad reported June 8.

An unidentified private bank is offering 23% interest on one-year savings accounts, Tasnim news agency reported June 10. Many other private banks have adopted similar policies. Even state-run banks offer higher than the authorized interest on savings accounts, the report noted, arguing that the state banks have been left with no other options as they want to survive in the ongoing race to attract liquidity.

Another report pointed to Bank Ghavamin, affiliated with the Law Enforcement Force. According to Akhbar Bank news website, Ghavamin offered up to 18% interest on deposits that were opened in the month of Ramadan (May 27-June 25).

Most of the banks justify their actions by claiming that they are offering a “special” program for a certain occasion. But in fact, they explicitly violate the regulations. Fatollah Amoli, a staff writer with moderate newspaper Ettelaat, called the looming banking crisis a security threat that could impact the country as severely as possible further Islamic State attacks. The writer criticized banks and the regulator for adopting non-Islamic interest regulations, which could jeopardize the whole banking system.

Some banks and credit institutions are suggesting that their customers keep a certain amount of money in their accounts for a certain period of time to become eligible to receive higher interest. Competition for attracting liquidity has been tough in recent years. Fixed income funds managed by banks or brokerage firms give a return of well above 20%, as an example. According to Alireza Baghani, a financial expert who spoke with Ana news website on May 27, the fixed income funds generate an annual return of 23%, while participation bonds and Islamic treasury bills offer even higher rates, up to 25%. Car leasing companies also try to attract part of liquidity by offering 28% interest to those car buyers who pay in advance. Thus, banks that generally face serious challenges in their funding and liquidity management have been involved in an “interest war.”

In addition, banks have had other problems to deal with. As they are not sure how much longer they can survive under the interest burden, they also need to find solutions to deal with their toxic assets, which account for nearly 45% of their total assets. The toxic assets include immovable assets, nonperforming loans and huge government debt.

It seems that the Central Bank has failed to bring interest on deposits to a single digit level. The regulator has pursued the policy for about four years, but it appears that it should give it up, at least for a period. Donya-e Eqtesad said in its June 8 report that the Central Bank of Iran has already decided to keep the rate of interest on deposits unchanged for several months until it can manage the situation. Although there is no official report available on the final decision of the Money and Credit Council, the prospect of higher inflation in the current year, coupled with the banks already defying the regulator’s interest rate policy, will leave no option for the regulator but to stop further cuts in the interest rate.

In the past six months, the baseline interest offered by banks has gradually increased, according to Donya-e Eqtesad. On average, the state banks offer 3.4% interest on savings accounts above the official 15% ceiling, while private banks and credit institutions offer 5.5% of extra interest. Economists are urging the Central Bank of Iran to get banks to comply with the current restrictions. The government’s failure to implement banking reforms and its move last year to issue billions of rials of high-return Islamic bonds and treasury bills kept large amounts of money out of reach of the banks. Observers believe the monetary regulator should get to the root of the problem by doing enough research. However, this may take officials months to come to an appropriate solution, while the banking system needs an immediate injection of liquidity.

The fact is that money cost in Iran is unreasonably high. Banks have very limited sources of income and the fees payable for banking services are generally low. The private banks complain that the difference between the lending rate cap and the baseline interest rate — which is currently about 3 percentage points — is too little to generate profit. In other words, as demand for money is increasing, the supply has remained weak. One of the ways to boost the money supply is foreign sources. Regretfully, the Iranian banking system does not have access to international resources. In this vein, perhaps the lifting of US unilateral sanctions could work as an effective immediate solution to the problems that Iranian banks are facing. If banks have access to sufficient cheap resources they don’t need to be concerned about the flight of expensive deposits. But that scenario will be unlikely given the ongoing hostile policies between Tehran and Washington. Under the current political circumstances, the Iranian government seems to have one option only, which is the implementation of structural reforms that will take years to elicit change.