US, Russia approach each other cautiously on Syria

Presidents Donald Trump and Vladimir Putin have set an ambitious pace for diplomatic discussions with other world leaders regarding Syria, but they apparently agree that small steps are best when dealing with each other on the topic. 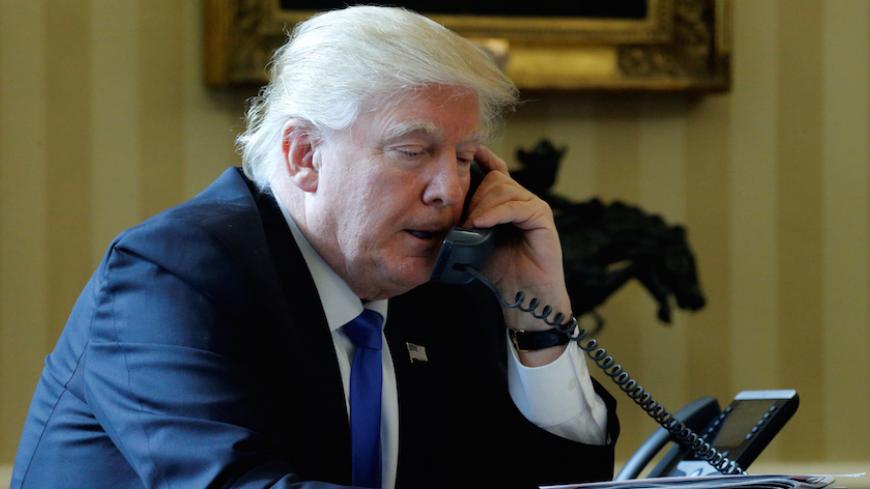 When it comes to finding a peaceful resolution to Syria’s civil war, Moscow and Washington are trying to keep their lines of communication open without crowding each other.

On May 2, Russian President Vladimir Putin and US President Donald Trump had their third phone conversation since Trump was elected in November. The first call took place Jan. 28, soon after the inauguration, while the second occurred shortly after the deadly terrorist attack in Russia’s “northern capital” of St. Petersburg, when Trump was among the first to express condolences to the Russian people. Both of those conversations revolved largely around ways to combat terrorism together, but substantively did not go beyond a “joint pledge” to do so. Trump’s offer of “the full support of the United States government in responding to the [St. Petersburg] attack and bringing those responsible to justice” was received with cautious optimism in Moscow that moving forward on the counterterrorism path might not be a hopeless idea.

The 30-minute conversation on May 2, reportedly initiated by Putin, was important in that it was the first since Trump ordered airstrikes on Syria’s Shayrat air base in response to the Syrian government’s alleged gas attack April 4 on its own people. The US attacks spurred criticism in Russia and revived deep-seated doubts about US cooperation on Syria and broadly in the region. Many Trump sympathizers — mostly in the Russian parliament — were embarrassed by the US action and struggled to come up with excuses for why they initially had high hopes for Trump. The sense in the Kremlin had been that Trump would gradually transform into a “normal Republican president,” with all the usual pros and cons for Moscow.

Russian and US leaders have long used such communications to convey political messages to their domestic audiences. No wonder Russian and US readouts of yesterday’s phone conversation emphasized the same aspects of the conversation differently, as if complementing one another to create a holistic picture of the talks. Although the two leaders also talked about North Korea and agreed to work jointly “in seeking diplomatic solutions to a comprehensive settlement of the problem,” their official statements made it clear that Syria was their main topic of conversation.

The White House statement called the talk “a very good one” and said Trump and Putin “agreed that the suffering in Syria has gone on for far too long and that all parties must do all they can to end the violence.” The Kremlin’s official press release mentioned that the conversation was held “in a constructive and businesslike manner,” and that the parties discussed “prospects of coordinating actions” against international terrorism “in the context of the Syrian crisis.” The White House expanded on the details, saying Trump and Putin discussed “safe, or de-escalation, zones to achieve lasting peace for humanitarian and many other reasons,” but used equally vague wording about a counterterrorism agenda: “They also discussed at length working together to eradicate terrorism throughout the Middle East.”

As expected, there was no “breakthrough.” Rather, the phone conversation was one of those contacts that have instrumental significance. Both presidents agreed “to activate a dialogue” between their respective foreign policy heads — Foreign Minister Sergey Lavrov and Secretary of State Rex Tillerson — “to seek options” for a sustainable cease-fire. The goal of this mission — as seen in Moscow — is to create a set of prerequisites necessary to later launch a “real” settlement in Syria. This is a sign that Russia looks at current developments in Syria as preliminary and eyes partnering with the United States on what’s to come. So far, the Lavrov-Tillerson task is to keep their respective presidents constantly updated on any progress. Remarkably, the future status of Syrian President Bashar al-Assad wasn’t mentioned, which suggests that his fate is no longer a central issue for US-Russia conversations on Syria.

One important development hasn’t received much attention: The United States is upgrading its presence at cease-fire negotiations in Astana, Kazakhstan, between the Syrian government and the militant opposition. During earlier talks, the US ambassador to Kazakhstan sat in as an observer. But the United States has sent a higher-level representative to participate in the May 3-4 talks, raising its profile in the Moscow-driven initiative mediated by Turkey and Iran. The greater US presence adds weight to the talks, which have become an important support platform to the Geneva peace process.

Putin and Trump spoke in favor of “continuing contacts by phone” and reiterated their intent to meet personally during the G-20 Summit in Hamburg, Germany, set for July 7-8. Earlier, there had been numerous suggestions that the pair might meet earlier. However, there is a view — at least among some top Russian diplomats and policymakers — that there’s no point in a presidential meeting unless both parties have something concrete to offer and can leave the meeting with some tangible results. If so, this requires serious prep work on important bilateral issues. Rushing an encounter without the necessary preparation might further harm the already-crippled relationship, so playing it cool makes more sense. On the other hand, some US analysts share a viewpoint that putting off a meeting for too long would allow momentum to build behind the rolling snowball of problems that challenge US-Russia cooperation — making it more difficult for the two to meet amicably and effectively.

Both groups seem to think a July schedule will allow an appropriate amount of time between meetings.

Finally, the very context of the presidents’ phone conversation shows the diplomatic marathon both leaders have to run. For Putin, the call with Trump took place just hours after Putin’s May 2 meeting with German Chancellor Angela Merkel, which was followed the next day by Turkish President Recep Tayyip Erdogan’s visit to Sochi. Next week, Putin is expected to meet with Israeli Prime Minister Benjamin Netanyahu and Palestinian leader Mahmoud Abbas.

For Trump, it is the meeting today with Abbas and one with Erdogan in mid-May (soon after Erdogan’s talks with Putin), and Trump’s proposed visit to Israel, possibly May 22.

The flurry of meetings with regional stakeholders suggests that even though Russia and the United States might want to focus on regions seen as more important to their national interests than the Middle East, the regional turbulence has engulfed both countries, convincing them of the necessity of moving toward a Syria settlement using a “small steps” strategy.