The current wide-ranging purges carried out under Turkey's emergency rule might one day spread to the ruling Justice and Development Party. 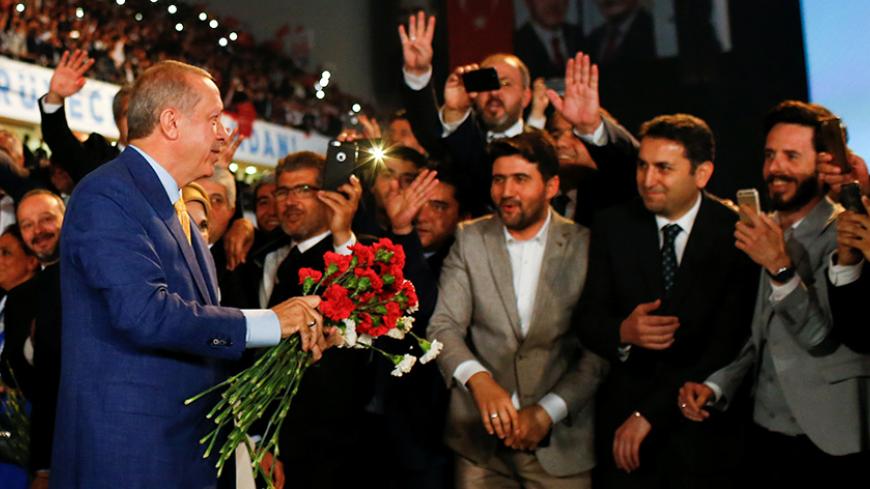 Turkish President Recep Tayyip Erdogan gives flowers to his supporters upon arriving at the extraordinary congress of the ruling Justice and Development Party in Ankara, Turkey, May 21, 2017. - REUTERS/Murad Sezer

After a 998-day interval, Turkey’s larger-than-life President Recep Tayyip Erdogan, thanks to the constitutional amendments passed in a highly contested April 16 referendum amid allegations of fraud, formally reacquired the chairmanship of the ruling Justice and Development Party (AKP). No one ran against him, and he received 1,414 votes from the delegates assembled at the AKP’s extraordinary congress.

Previously, whoever was serving as president of the republic was supposed to be apolitical and not be affiliated with a political party, much less be a party leader. The recent constitutional amendments not only are going to equip Erdogan with extraordinary powers, but also are enabling him to firmly grasp the reins of the AKP.

For many people, this may not seem that significant a development. Although Erdogan held no formal party affiliation, it was public knowledge that he had never severed his links with the AKP and was leading the party from without. But Erdogan, who seems to have an increasingly control freak personality, wanted to exercise formal leadership.

Some new rules were added to the AKP charter. According to the amendments, the AKP is committed to the principle of “one nation, one flag, one homeland, one state”; the last term accentuates the “unitary” nature of state, rejecting any notion of autonomy or federalism as a mode of governance. The changes were made at Erdogan’s demand. He has long been very fond of repeating the phrase, no matter how much its words resonate with Hitler Germany’s “Ein volk, ein reich, ein fuehrer” — "One people, one state, one leader." Instead of Nazi trinity, the AKP adopted four terms, with an allusion to the Muslim Brotherhood’s Rabia gesture, which connotes four in Arabic and which has become Erdogan’s favorite salute. He bends his thumb of right hand and salutes people with wide-open four fingers. Indeed, implicit in the AKP’s new “Rabia” is “ein fuehrer” — one leader — and that is Erdogan.

The unwritten rules of power struggle in any drift to autocracy were present in Turkey, and Erdogan tended to accumulate power in his hands. His main target, albeit never declared, has always been Gul, known as the real architect of the AKP. Gul had led the Reformist-dissident faction of the Islamist Virtue Party of the late 1990s that evolved into the AKP in 2001.

Erdogan’s grip on the AKP had begun to consolidate a decade ago. A close aide of then-President Gul had told me in April 2007 that the two of them had scrutinized the AKP list of candidates for the June 2007 parliamentary elections and could not find 20 candidates among the 550 who would nominate Gul for the presidency, a constitutional requirement in that period.

The AKP list of candidates was strongly inclined toward Erdogan even back in 2007. Yet Erdogan never felt fully secure or in complete command. But after the acute intra-Islamist power struggle that culminated in the coup attempt of July 2016, Erdogan felt it was imperative to further impose control over the AKP.

In May 2016, he was not satisfied with the degree of loyalty of then-Prime Minister and party Chairman Ahmet Davutoglu, who had succeeded Erdogan in those posts, and unceremoniously pushed Davutoglu aside and replaced him with a staunch loyalist, Binali Yildirim.

But even the loyalty of Yildirim could not be counted on without any qualms as long as both those titles — prime minister and party chairman — were held by somebody other than Erdogan.

The referendum of April 16, widely believed to have been rigged, is to establish a peculiar presidential system designed for Erdogan and sidelines the post of the prime minister, making it possible for Erdogan to regain the title of chairman of the party.

In his speech after being elected with 1,414 votes May 21, Erdogan pledged to keep the state of emergency as long as necessary without any hint of when it might end. Given the unprecedented crackdowns witnessed since July 15 that have seen 50,000 people put in jail and 200,000 people purged from the civil service, one can assume that the purges will continue nonstop.

Only 10 people from the first AKP congress are currently in leadership posts, such as being on the central executive committee. The AKP of today has nothing to do with the party founded in 2001, a year before it took power. From now on, the AKP will resemble more Saddam Hussein’s or Bashar al-Assad's Baath parties. It will be a “one single party” of “one and only one leader.”

Inevitably, that would necessitate further power consolidation; thus, any potential symbols that might attract the gathering of AKP dissenters and discontents should be eradicated.

This means that the purges most probably one day will reach Gul and Arinc, no matter what they do or don't do. As long as their names provide a rationale for the discontented to assemble, they may share the fates of those old Bolsheviks purged in Stalin’s infamous Moscow Trials between 1936 and 1938.

Stalin’s power struggle in the late 1920s initially had targeted Leon Trotsky, the name that was closest to Lenin, the leader and the founder of the new Soviet state. Then the accusation of Trotskyism involved every big name of the Bolshevik Revolution from Grigory Zinoviev to Lev Kamenev, from Nikolai Bukharin to Karl Radek and so forth. The purges continued full steam ahead in the 1930s and became Stalin's main mechanism of governance. Even a hero such as Marshal Mikhail Tukhachevsky, a Bolshevik military hero of the Russian Civil War, was not spared from execution.

Simon Sebag Montefiore, in his celebrated book “Stalin: The Court of the Red Tsar,” wrote, “Within a year and a half, 5 of the 15 political bureau members, 98 of the 139 Central Committee members and 1,106 of the 1,996 from the Seventeenth Congress had been arrested.”

If 1930s Nazi Germany could be more and more becoming a reference point for today's Turkey, the Moscow Trials of Stalin’s Soviet Union could also become one for Turkey’s ruling party following Erdogan’s return as AKP chairman.