Will arming of YPG help open Kurdish corridor in Syria?

The US decision to provide heavy weapons to the YPG for the Raqqa operation provides hope to Kurds in Syria, but Turkey worries that the arms will be used to establish a Kurdish corridor. 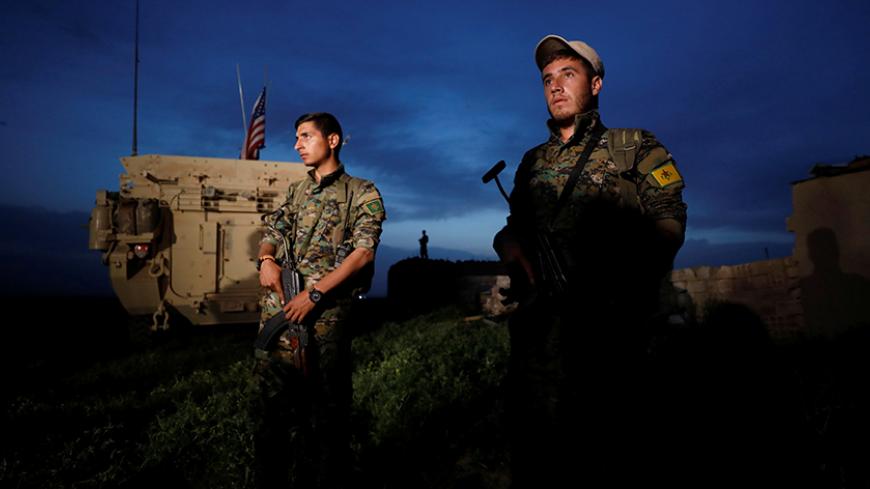 Kurdish fighters from the People's Protection Units stand near a US military vehicle in the town of Darbasiya, Syria, next to the Turkish border, April 28, 2017. - REUTERS/Rodi Said

DIYARBAKIR, Turkey — Armored vehicles flying American flags, American soldiers posing for photos with Kurdish People’s Protection Units (YPG) militants and incessant reports on US-YPG relations have been the top news in Turkey in recent days, all suggesting that the United States was heading toward an alliance with the Kurds on the Syrian battlefield.

Turkish officials reacted sometimes harshly, sometimes more guardedly, to this alliance in the making. The US administration finally said the last word with statements from their officials that Washington had decided to give direct weapons assistance to the Kurds. Although American officials tried hard to explain that the weapons will be going to the Syrian Democratic Forces, everyone knows that the backbone of that force is the YPG. This radical decision by the Trump administration has naturally become a topic of international politics. But what impacts will this decision have on the ground in Syria? The YPG is the sole military force of the Kurdish region called Rojava. How will the YPG’s access to heavy weapons alter the power balances in the region?

According to Salih Gedo, the secretary-general of the Syrian Kurdish Democratic Left Party, the weapons will pave the way to federalism for the Kurds. He told Al-Monitor that the decision to supply guns to the YPG has uplifted the spirits of all Kurds; he also called for there to be political support for Kurdish space in a federal Syria.

“No doubt this will have a resounding effect in the region. The spirits of our fighters and people alike have risen meteorically. This major step will bring success to the Kurds. The project we have is federalism. If we are also supported politically, we will succeed. Guns by themselves are not enough for the Kurds. Fighting by our fighters is not enough; they must also have political gains. We need political backing for federalism, which is the centerpiece for all Kurds. US support, coming from a superpower, is very important for us,” Gedo said.

He said the weapons will affect the Kurds' relationships with other ethnic and religious groups as well as Turkey. “When you look at Syria as a whole, you will see that the only group that has good relations with everyone is the Kurds. Kurds can coexist with all. Regional powers, particularly Syria, have hatched many plots to poison the Kurds' relationships with others. Turkey has tried the same,” he said. “We don’t want to be enemies with Turkey and want to have good neighborly relations with it. We tried hard for that, but Turkey won't accept any requests from the Kurds. They are treating us as the enemy. This animosity will have no benefits for Turks and Kurds. Turkey has reacted very strongly to the decision to give us guns. I think this US decision will also have a bearing on Turkey’s policies.”

Turkey is greatly worried about the transfer of these weapons to the Kurdistan Workers Party (PKK) and their potential use against Turkey. Is this a realistic fear? Aldar Halil — a member of the executive council of the Movement for a Democratic Society, the political body that groups together the Syrian political parties and civil society organizations closest to the dominant Democratic Union Party (PYD) in Rojava — said these weapons only suffice for the defense of the region. Halil told Al-Monitor that the United States has thus declared that it is officially an ally of the Kurds.

“New weapons will mean a stronger YPG. The political meaning of the US decision to give guns means acknowledging the YPG as an ally, a partner and a friend of the United States. It will be a support for our autonomy. Other peoples living here will see the YPG getting stronger with new weapons and will adopt it as their own force. Everyone will identify with it, not only the Kurds. A federalist system will make headway. The guns will suffice only for the war in Syria. We won’t know where the PKK gets its weapons. Our guns are only for the defense of the region and to defeat Daesh [Islamic State],” he said.

Journalist Hemin Xosnaw is among those who say the guns will not get into the PKK’s hands. Xosnaw, who lives in Iraqi Kurdistan and knows the region well, says neither the guns given earlier nor the new ones to be delivered will reach the PKK. But Xosnaw pointed to another major concern of Turkey: a Kurdish corridor. Such a corridor would symbolize the success of Kurdish aspirations. Xosnaw told Al-Monitor that weapons assistance to the YPG would pave the way for the Kurdish corridor. He added, “For the first time, the US is giving [heavy] weapons to a nonstate force. It has given light weapons to other nonstate forces, but this is the first time it will be giving heavier weapons, tanks, missiles. Militarily, the US is trying to upgrade the YPG to the level of the Syrian army. That support will not be confined to the Syria battlefield. The YPG is becoming the regional force of the US, which wants to implement its entire agenda with the YPG, which has become its sole dominant force of the region. Turkey has been excluded from the game in Syria. Other organizations are not important for the US. The YPG has won the confidence of the US. Of the weapons and ammunition the US has given to the YPG, not a single bullet has gone to the PKK. The PKK for 40 years saw the US as an enemy. Now they are aware of what the US wants, how its politics work and how the PKK should behave. The weapons will not go to the PKK, but they have altered the balances in the region. I believe the US decided to provide the guns after reaching an understanding with Russia. If needed, Russians themselves will give out guns at Afrin. This means opening the corridor to the Mediterranean. Gulf countries also want this.”

Most Kurds are pleased that the guns are going to the YPG. But the Syrian Patriotic Assembly, made up of parties close to the Iraqi Kurdistan Democratic Party, is worried.

Syrian Patriotic Assembly Chairman Ibrahim Biro, in a press conference at Erbil, said military assistance to only one party has caused problems in Rojava. He said there is concern that the weapons might be used as pressure on other Kurdish groups.

Still, heavy weapons assistance to the YPG has truly boosted Kurdish self-confidence. When these weapons are deployed in the field, the Syrian war and the status of Kurds will enter a new phase. If the Kurds can overcome their internal problems, they will undoubtedly be winners. Otherwise, Kurds will again be waiting for another spring.