Many say Turkey's military education system, which is being redesigned following the July 15 coup attempt, is increasingly being entrusted to the "devout" bloc. 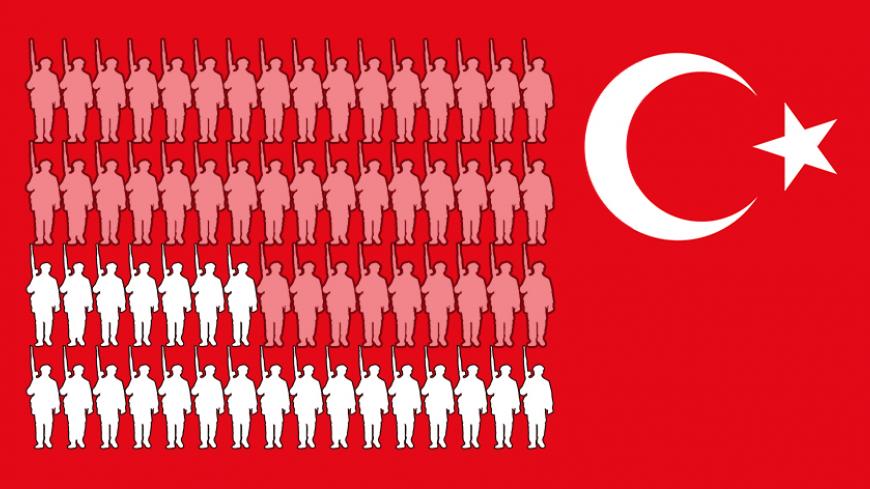 The groups most affected by mass purges after the July 15 coup attempt in Turkey were the military cadets at high school and university levels. The government dismissed about 7,000 officer candidates attending four-year military high schools and four-year academies and transferred them to civilian schools.

In November, the government established the National Defense University, attaching it to the Ministry of Defense. The government also attached to the ministry the Army Military Academy in Ankara, Navy War Academy in Istanbul and Air Force War Academy in Istanbul, which all had offered undergraduate college-level education, and the Staff College at Levent/Istanbul, which had offered graduate-level degrees. Finally on April 7, new officer candidates were invited to submit their applications to the reconfigured academies. Public relations campaigns emphasize patriotism and the honor of serving in a highly esteemed institution such as the Turkish Armed Forces (TSK). The application process runs through the end of May.

So far, 120,000 candidates, including 35,000 young women, have applied to become officers. The Defense Ministry is pleased with the number of applicants; officials see the high numbers as a solid indicator of respect for the TSK. But the applicants' performance results in national university entrance examinations were far below previous years, when military school candidates were chosen from the top 100,000 university applicants, out of 2.5 million applicants annually. This year, the applicants are generally from the top 400,000-500,000 bracket.

In years past, officer candidates had to attend four-year military high schools in Istanbul, Izmir or Bursa, then spend another four years at the war academies. Now there is a rapid increase in the use of "contract officers" who have graduated from civilian universities. Of course it is healthy to have diverse sources for officers, but this issue is still considered highly sensitive and thus subject to harsh ideological arguments.

Last week there was an interesting report in the daily Aydinlik, the mouthpiece of the Eurasianism-supporting Homeland Party. It said more than 30% of the candidates accepted at the Army War Academy were recommended by officials of the ruling Justice and Development Party (AKP) in the provinces. It said some military officials are concerned by this highly disproportionate number of AKP-recommended candidates.

There are many, including myself, who feel that TSK military education and training have been increasingly entrusted to the “devout” bloc. This large and influential bloc includes right-leaning officers who identify with the ideology of the Nationalist Action Party and Great Union Party; conservative officers dismissed after the 1997 coup attempt and who embraced the Istanbul-based Association of Justice Defenders; officers affiliated with cultist religious sects; and those known to be close to AKP provincial organizations.

To allow the "devout" bloc to dominate the military education system is to train officers who will sacrifice themselves for country and religion. The undeniable role of the conservative bloc in undergraduate-level military education is generating strong reactions from the staunchly secular defenders of the founding principles of the Turkish Republic: independent patriotism, secularism, positivism, etatism and elitism.

President Recep Tayyip Erdogan in October appointed Erhan Afyoncu, a professor of nationalist tradition history, as the first president of the National Defense University. Afyoncu has no academic experience in security/strategic matters and war studies, and his appointment has triggered strong reactions from Eurasianism proponents and retired generals.

The new university president's team is made up of mostly civilian academics instead of retired and serving officers with graduate and postgraduate degrees. This team reportedly seeks to establish university institutes for military history strategic research and intelligence studies and is also working hard on the undergraduate military curriculum. Before the July 15 coup attempt, the army, navy and air force war academies used to grant engineering degrees after four years, and such diplomas were valid also in civilian life. It is not yet clear if this practice will continue. Many wonder how much emphasis the team will place on courses on religion, nationalism and Ottoman history, alongside technical courses and combat physical training.

The military education system will remain at the heart of the controversy between civilians and soldiers in the post-July 15 setting. Actually, this raging debate on military education reflects some risk factors that prevail in civilian-military relations in general in the country.

The transition from the monolithic Turkish military implies the existence of more than a few micro-identities within the military, driven by the weakening of the office of the Chief of General Staff both within the military and to the all-powerful Erdogan. The friction must be resolved among those military elites with divergent worldviews regarding the military as a profession and the qualifications an officer should have, and the weight that should be given in the military curriculum to religious, nationalist and neo-Ottoman sentiment, and secularist and Kemalist references.