Russia may be keeping quiet publicly about Donald Trump’s relations with Saudi Arabia, but Trump’s recent trip to the kingdom raises some interesting questions for Moscow. 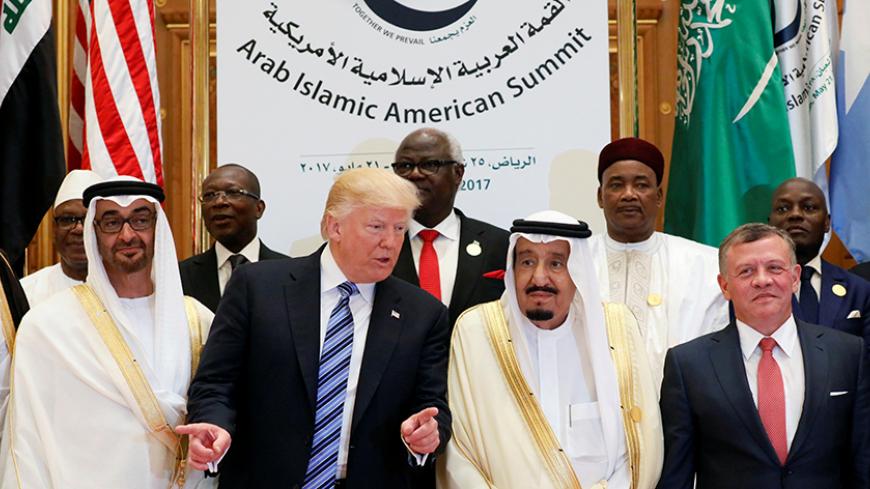 Kremlin officials have adopted a remarkably benign public attitude toward US President Donald Trump’s recent visit to Saudi Arabia, which included a speech at an Arab Islamic American Summit denouncing Iran, meetings with Saudi and other regional leaders, and an agreement to sell $110 billion in advanced weapons to the kingdom. Nevertheless, their private views may be less sanguine.

Referring to the arms deal, Russian President Vladimir Putin’s press spokesman Dmitry Peskov said, “I will leave this without comment.” Neither Putin nor Foreign Minister Sergey Lavrov have mentioned Trump’s trip, although Putin highlighted Moscow’s cooperation with Riyadh in maintaining stable global oil prices shortly beforehand. Notably, however, Russia’s Security Council met a few days later, while Trump was in Europe, and “discussed the ongoing operation of the Russian Aerospace Forces in Syria in the context of international developments.” This bland phrasing appears to refer to a conversation about the implications for Moscow of Trump’s visit.

Andrey Sushentsov, the head of the Moscow-based consulting agency Foreign Policy Advisory Group and a program director at the Valdai Discussion Club, explained Russian officials’ outwardly calm attitude by highlighting the continuity in US policy toward Saudi Arabia and its neighbors. As Sushentsov told Al-Monitor, “Moscow does not see the Trump visit to Saudi Arabia as a deviation from the previous course on support of Gulf monarchies against Iran in regional affairs.” Perhaps more important, Sushentsov added, Moscow sees limited prospects for Trump’s outreach to Riyadh and others, predicting that “the Trump administration would refrain from embedding itself in a large-scale confrontation with Tehran that would imply anything other than supply of weapons.” From this perspective, he concluded, “observers in Moscow believe that the Trump administration needs a few ‘good deals’ abroad to project its image as a ‘winner’ inside the country, where opposition has effectively paralyzed the current administration.”

Still, the fact that senior officials have avoided public comments about Trump’s highly visible effort to engage with Saudi Arabia and the Gulf monarchies does not mean that Moscow has been silent on the matter. Russia’s internationally-oriented state media — especially Sputnik News — have expressed wide-ranging skepticism about the trip. In a spate of articles published shortly after Trump left Saudi Arabia, Sputnik quoted a “former European Union consultant” who argued that the trip was a “major public relations success” but was unlikely to produce meaningful new cooperation against terrorism. Sputnik also cited other European academics and experts arguing that the effort would backfire because Saudi Arabia is despised and isolated among Arabs and Muslims, and it quoted a US expert predicting that Iran’s Islamic Revolutionary Guard Corps “could now become more aggressive than ever” in response to Trump’s outreach to Riyadh. On top of this, Sputnik reported on US Sen. Rand Paul’s introduction of a resolution disapproving of the arms sale, describing Paul’s concerns over Saudi Arabia’s war in Yemen and repeating Amnesty International charges that US weapons are contributing to Saudi human rights violations.

Foreign Ministry spokesperson Maria Zakharova reinforced this final point when questioned during a press briefing. “Deals between countries,” she said, “if they are made legally, is a matter of bilateral relations provided that international law is complied with” while reiterating Moscow’s call for “the most serious measures” to avoid “further degradation” of the situation in Yemen. She further noted that Moscow has already identified who “is responsible for” conditions in Yemen but declined to name Riyadh.

In view of Moscow’s own long-standing position on the global arms trade — namely, that no one should criticize Russia for pursuing deals permissible under international law — Russian officials have only a very slim basis on which to express disapproval of the US-Saudi announcement. Thus, while Zakharova went on to say that signing "this type of contract requires the understanding of the situation in the region,” an implicit assertion that the United States either did not understand the situation or chose to ignore it, she handled the matter rather gently, without naming the United States or Trump and without leveling any direct accusations. Needless to say, after supplying weapons to Syria’s Bashar al-Assad regime for several years during a civil war far more destructive than Yemen’s (at least so far), Russia’s representatives are probably wise to avoid pointing fingers in this regard.

Yet it is perhaps more important that the Kremlin remains interested in exploring whether and how Russia and the United States may be able to work together not only in Syria, but in their wider bilateral relations. Officials and analysts in Moscow see Washington’s ongoing political turmoil as a considerable constraint on US-Russia relations, and they have curtailed many of their earlier aspirations, but they continue to hope that the Trump administration may present new opportunities. In that context, Russia’s leaders are prepared to temper their reactions to US policies that might otherwise provoke harsher rhetoric. From this perspective, Zakharova’s comments and the Sputnik reports preview lines of attack on US-Saudi cooperation that Russia might pursue in the future, should US-Russia ties stall or deteriorate.

Even then, of course, Sushentsov is right to note that the arms deal falls well within the parameters of America’s pre-September 11 policies in the Middle East (especially under Republican administrations), when exchanging weapons for oil formed the core of the US-Saudi relationship. Indeed, while Moscow would not especially welcome America’s return to that approach — strong support for Riyadh and other Gulf states to contain and balance Iran — Russian officials would likely prefer it to more recent US efforts to democratize the region, which the Kremlin has seen as profoundly destabilizing.

Still, a US effort at empowering Saudi Arabia as a regional balancer raises some interesting questions for Moscow, particularly in defining the limits of Russia’s relations with Iran. In the past, Russia has not typically exercised self-restraint in its arms sales, with one notable exception: former President Dmitry Medvedev’s decision to block implementation of a contract to sell S-300 missiles to Iran. Of course, Medvedev did so at the high point of the Barack Obama administration’s reset policy, as part of an attempt to press Iran to negotiate on its nuclear program — conditions that are lacking today. Conversely, Russia regularly defended Tehran in the United Nations Security Council, where its veto continuously prevented tougher UN sanctions or other measures.

Today, there are few reasons for Moscow to forgo selling Iran any weapons that its government may want to buy. However, now that the United States, Russia, Iran and others are parties to a nuclear deal — and Iran no longer faces a focused Western attempt to enforce international isolation — Tehran is less likely to face pressure in the UN Security Council; indeed, the Trump administration would need to win over British and French representatives for any new pressure before worrying about Russia’s support or opposition. Beyond selling arms and technology and pressing for Tehran’s inclusion in Syria talks, what else is Moscow prepared to do for Iran?