US, Russia face off in Middle East

US-Russian relations involving the Middle East could be affected by the new US National Military Strategy, which sees a low but growing risk of an "interstate war with a major power." 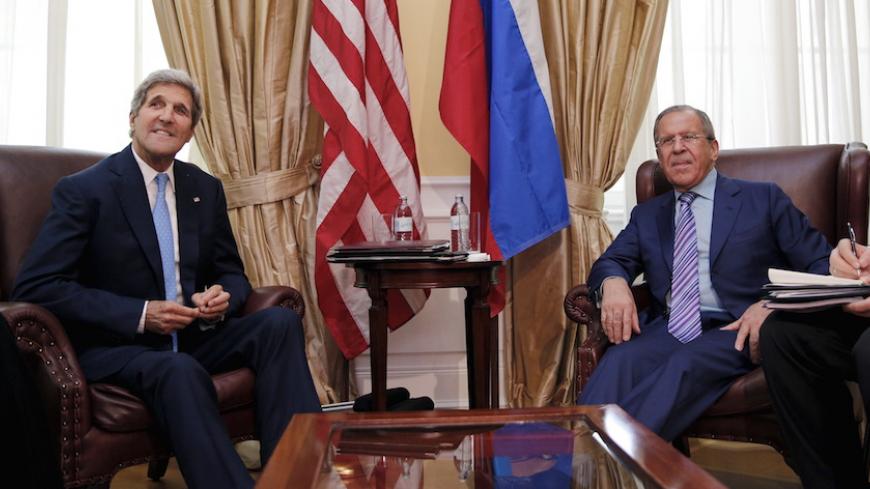 For those who believe that what governments do is related to what they say, Moscow’s and Washington’s statements about one another are increasingly troubling. While actually rather cautious in its language, the United States' National Military Strategy is the latest example of evolving official threat assessments that describe new risks of direct conflict between the two countries. As a strategic region — and one of enduring competition and instability — the Middle East may well experience some of the consequences.

Signed by the chairman of the Joint Chiefs of Staff, the strategy states “the probability of US involvement in interstate war with a major power is assessed to be low but growing,” implicitly referring to a potential military conflict with Russia or China. While this comes approximately one page after a disclaimer that “none of these nations [Russia, Iran, North Korea or China, described as nations challenging the international order] are believed to be seeking direct military conflict with the United States or our allies,” it nevertheless reflects — and is intended to convey — a change in the US military’s thinking.

Why does it matter to people in the Middle East that America is rewriting a government report that few people outside the US national security establishment actually read? Because the reports and Russia’s analogous documents provide formal guidance to military leaders and planners in both countries. A sense that direct conflict might be more likely makes planning and preparing for that contingency more important, even when considered improbable. Geopolitics, geography, energy and other factors could quickly involve the Middle East in any such contest. As the Russian Bolshevik revolutionary Leon Trotsky once reportedly said, “You may not be interested in war, but war is interested in you.”

Even robust competition short of war could have serious implications for the region. Operationally, a “growing” probability of armed conflict between the United States and Russia encourages US military planners to reassess America’s global force posture. If there is a conflict with Moscow, are US troops, ships and aircraft deployed in the right places? Should America move some of its military assets from the Middle East or other regions to Europe, which many assume would be the focus on any such confrontation?

Russia’s military leaders have to consider similar questions, though Moscow’s limited international deployments and its constraints in projecting power produce a different emphasis. During the Cold War, for example, one key question was the Soviet Union’s access to the Mediterranean Sea through the Bosporus, controlled by Turkey, which is of course a NATO member. Could Russian naval vessels currently operating in the Mediterranean Sea become trapped there? What about Russia’s small presence at the Tartus naval facility in Syria? Similarly, in any serious conflict, could Russia sustain its arms shipments to Syria?

Likewise, these reports also have a part in shaping the overall tone and direction of the US-Russia relationship. And a more confrontational tone can quickly become self-reinforcing, producing more substantive changes.

Although the US National Military Strategy recognizes Moscow’s contributions to counternarcotics and counterterrorism efforts, it goes on to assert that Russia “does not respect the sovereignty of its neighbors” and “is willing to use force to achieve its goals.” (The latter is a somewhat curious comment from the US military, which America’s political leadership also employs “to achieve its goals.”)

Unsurprisingly, Moscow noticed this and the reference to a “growing” risk of conflict. Indeed, Kremlin spokesman Dmitry Peskov promptly expressed “regret” at the report’s “confrontational mood, devoid of any impartiality toward our country” and said that Russia is revising its National Security Strategy, adding that “all national security threats are being taking into account and scrutinized and the corresponding countermeasures devised.”

The following day — just one day after the Pentagon released the National Military Strategy — Russian President Vladimir Putin convened a meeting of his country’s Security Council, during which he reiterated Peskov’s message (without connection to the United States), saying, “We must make a rapid analysis of all the potential challenges and risks we face — political, economic, information risks and others. Based on this analysis, we then need to make changes in our National Security Strategy.” This process will move Russia’s military and security bureaucracy toward contingency planning for conflict even as the US report moves America’s.

Moreover, as the United States and Russia consider direct conflict to be increasingly possible, even if still very unlikely, they impose this new context on their existing relationships around the world, intensifying existing competition for influence. Russia’s efforts to court Egypt, for example, have a different meaning in the White House and the Kremlin if the risk of a US-Russia conflict is “growing,” as does Moscow’s new naval access agreement with Cyprus. Russia’s arms sales to Iran — and US pursuit of the nuclear agreement — similarly take on additional flavor.

Over time, this dynamic could increasingly lead Washington to lobby its partners in the Middle East to choose sides by limiting their cooperation with Moscow. (Since Russia is the weaker party and has comparatively limited leverage, it has little to gain from this approach and would more probably continue its attempts to exploit frustration with America to cultivate individual governments.) The United States would be in the strongest position to discourage interaction with Russia in dealing with the governments most dependent on its protection, for example, Bahrain, Kuwait, Qatar and the United Arab Emirates. That said, if the United States looks less willing to exercise its power, its partners will be less dependent and less subject to such pressure.

Conversely, as US military planners see a greater risk of conflict with Russia, they will generate pressure inside the US government to place greater value on existing alliance relationships and partnerships around the world. Here, governments hosting major military bases might find that they have new influence in dealing with Washington. In the Middle East, this would apply especially to countries with US naval and air bases that would be necessary to interdict Russian forces in any conflict (also the Arab Gulf nations) — again, recognizing that this is currently a remote possibility. During the Cold War, this dynamic generally reduced official US scrutiny of its partners’ domestic practices, something both President Barack Obama and former President George W. Bush have denounced.

Perhaps perversely, an environment in which Washington and Moscow see a growing possibility of conflict — but still consider it to be unlikely — can actually be more dangerous than many might think, in that it encourages intensified rivalry (to create the most favorable possible balance of power in advance of any potential confrontation) while maintaining the sense that actual conflict is very improbable (thus reducing incentives for self-restraint to avoid unnecessary risks). From this perspective, it is worth considering that the Middle East is already more than sufficiently volatile based strictly on tensions within and among regional states. Reigniting major power competition could pose even greater dangers to peace and stability.

Thankfully, a US-Russia conflict is still quite unlikely. Unfortunately, however, it is more likely than it was one year ago, five years ago or 10 years ago. And without an unexpected diplomatic breakthrough, next year could be worse.