Is Trump holding a Russian card in the Middle East?

Trump visit launches new US-Saudi partnership, but the endgame in the Middle East still depends on Moscow and Tehran. 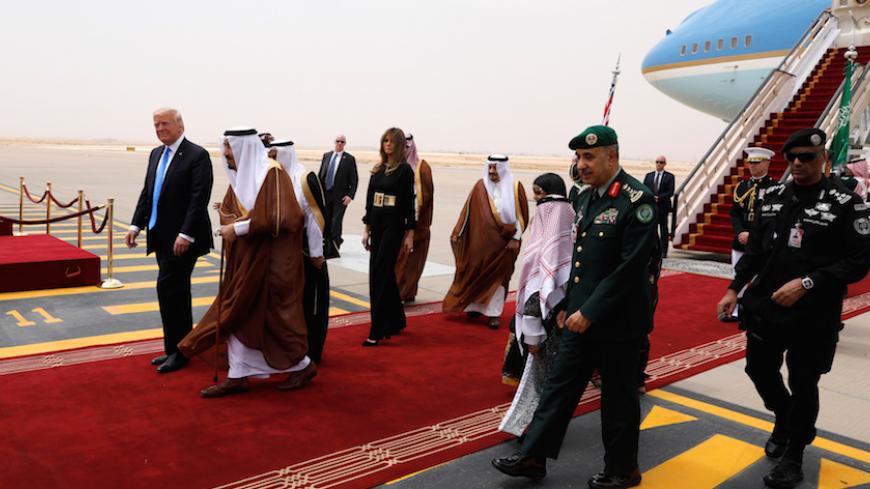 The choreography of the first day of US President Donald Trump’s visit probably exceeded even Saudi Arabia's expectations. The United States and the kingdom on May 20 concluded a $110 billion arms deal ($350 billion over the coming decade), the announcement of $40 billion of Saudi investments in US infrastructure projects and pronouncements of a new US-Saudi partnership in the region. Trump will give a speech May 21 that he said will address the “growing concern about terrorism, the spread of radicalization and Iran's role in funding both.” In addition, Trump is calling for US regional partners “to take more responsibility and a much bigger role in fighting terrorism in their region.”

In a news conference, US Secretary of State Rex Tillerson and Saudi Foreign Minister Adel al-Jubeir seemed in lockstep in their approach to Iran. Tillerson described the arms package as a means to deal with “malign Iranian influence.” Although the US secretary of state gave priority to a political solution in Yemen, he supported additional Saudi military pressure on Houthi armed groups, which are backed by Iran. According to the World Health Organization, Yemen is suffering from an unprecedentedly rapid spread of cholera and “massive damage to the country’s sewage and electricity infrastructure, which have left the water supply contaminated.”

In Jerusalem, Trump will build on the shared concerns among the Gulf States and Israel about Iran. Ben Caspit wrote here in March that “Israel is determined to maintain its red lines on Hezbollah with the utmost meticulousness. It will do whatever it takes to prevent the transfer of any weapons to Hezbollah that could upset the balance of power.”

There may be a question as to whether Trump is quietly holding, or should be holding, a Russian card in his plans for the region. The Trump visit could, or should, be the sign of a trend in which the US strengthens its commitments and relationships with Israel and America’s traditional Sunni allies, such as Saudi Arabia and the United Arab Emirates, as a means of putting pressure on Iran and providing support for an Israeli-Palestinian peace deal, while letting Russia take the lead with the Shiite “resistance axis” — including Iran, Syria and Hezbollah — in seeking a diplomatic process to address the region’s conflicts.

Iran is unlikely to be cowed by the spectacle in Riyadh, and there will of course be no deal with Iran or Syria without the good offices of Russian President Vladimir Putin, who has a direct line to Iranian Supreme Leader Ayatollah Ali Khamenei. The decisive re-election of Hassan Rouhani as president of Iran on May 19 is a win for the so-called moderate trend, which will now have Khamenei’s support. In the absence of a diplomatic process, the people of Yemen and Syria can expect even more misery in the coming years.

And this brings us back to the White House meeting May 10 between Trump and Russian Foreign Minister Sergey Lavrov. Most of the media attention focused on what Trump may have said to the Russian envoy about former FBI director James Comey and on the appropriateness of Trump’s sharing of sensitive Israeli intelligence information about Islamic State’s terrorist plotting. US national security adviser H.R. McMaster, who attended the meeting, characterized the exchange between Trump and Lavrov as “wholly appropriate.” Ben Caspit writes this week about how the United States and Israel acted quickly to mitigate any disruption in intelligence cooperation.

But Syria and Iran were also on the Trump-Lavrov agenda. The White House said, “Trump emphasized the need to work together to end the conflict in Syria, in particular, underscoring the need for Russia to rein in the Assad regime, Iran and Iranian proxies. … He also raised the possibility of broader cooperation on resolving conflicts in the Middle East and elsewhere. The president further emphasized his desire to build a better relationship between the United States and Russia.”

On May 19, the chairman of the US Joint Chiefs of Staff, Gen. Joseph Dunford, hinted at a possible division of labor with the Russians in Syria, while noting the expansion of reducing the possibility of conflict between the US and Russian militaries. “We are looking for the Russians to — to work with the regime, to deconflict our operations. I think what you're highlighting is absolutely a fair point, which is the ground is becoming increasingly complex and constrained. But to date, we have — we have been able to deconflict operations. … We had a proposal that we're working on with the Russians right now. I won't share the details. But — but my sense is that the Russians are as enthusiastic as we are to deconflict operations and ensure that we can continue to take the campaign to ISIS [Islamic State] and ensure the safety of our personnel,” Dunford said.

Laura Rozen reports that just five days after the Trump-Lavrov meeting, in a little-noticed shift, “The Trump White House suggested it was willing to work not only with Russia but also with Iran to try to end the killing in Syria and advance a political transition if they helped bring an end to Assad’s atrocities. Trump has previously lambasted the nuclear deal with Iran and supported calls for additional sanctions over the country's ballistic missile program. ‘The United States remains open to working together with both Russia and Iran to find a solution that leads to a stable and united Syria,' Spicer said [on May 15]. But in order for us to work together to bring an end to the violence in Syria, Russia and Iran need to acknowledge the atrocities of the Assad regime and use their influence to stop them.”

Although Tillerson’s remarks in Saudi Arabia could hardly be characterized as a gesture for dialogue, the US secretary of state added, “In terms of whether I'd ever pick the phone up, I've never shut off the phone to anyone that wants to talk or have a productive conversation. … In all likelihood, we [Iran and the US] will talk, at the right time.”

As we wrote in this column in November 2013, a shift in Israel-Iran ties “is not so far-fetched when one considers the role that Russia can play as a broker in this exchange. … The United States alone does not yet have all the keys to close a deal between Israel and Hezbollah, but the pieces are coming together. Any negotiation on Hezbollah will run through Damascus as well as Tehran, and here again we get to Moscow’s role, with its newfound credibility in Damascus, Tehran, Jerusalem and Washington.” Israeli Defense Minister Avigdor Liberman told Caspit in February that he was unsure of Russia’s support for Israel’s objectives of a withdrawal of Iranian and Hezbollah forces from Syria, while acknowledging the need for US-Russian coordination. Israel, Liberman said, is in “a complex and complicated dialogue” with Russia.

These trends toward a fresh start are often fragile and ultimately depend on the courage and convictions of leaders willing to take risks and chart a new course. US-Russian collaboration is essential to the endgame in Syria, as we wrote in our second column in December 2012. As Akiva Eldar wrote last month, “If there’s a common denominator that transcends all the disputes between the United States and Russia, it is the belief in the need to resolve the Arab-Israeli conflict that was fanned by their Cold War. For a change, Israel can show these two powers the road to peace.”