Saudi officials see an opportunity to gain influence in the Middle East when US President Donald Trump visits their country later this week. 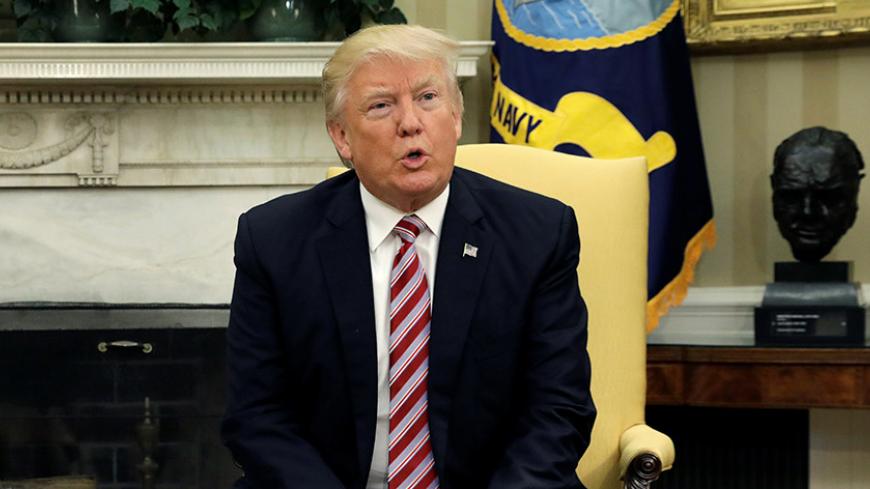 US President Donald Trump speaks to reporters after his meeting with Russian Foreign Minister Sergey Lavrov at the White House in Washington, May 10, 2017. - REUTERS/Kevin Lamarque

Preparations are underway in Saudi Arabia to welcome US President Donald Trump, who is seeking to mobilize the Islamic world against terrorism, while Saudi officials are hoping to gain some political advantages, especially as they exchange threats with Iran.

The US-Islamic-Arab Summit is scheduled to be held in the Saudi capital, Riyadh, on May 21 in the presence of Trump. Meanwhile, on May 7, Saudi Crown Prince and Interior Minister Mohammed bin Nayef welcomed in his Jeddah office US Secretary of Homeland Security John Kelly and Thomas Bossert, Trump's counterterrorism adviser, to discuss issues of mutual interest in security and fighting terrorism, according to the Saudi Press Agency (SPA).

Observers believe the timing of the US security convoy's visit to Saudi Arabia indicates the White House’s firm trust in Nayef and should remind Riyadh that Washington still needs Nayef's efforts to fight terrorism.

The kingdom announced May 1 that the Saudi Ideological Warfare Center, affiliated with the Saudi Ministry of Defense and headed by Deputy Crown Prince Mohammed bin Salman, will launch initiatives to fight terrorism. On April 23, King Salman bin Abdul-Aziz Al Saud had issued a directive to establish a National Security Center linked to the Saudi Royal Court.

On May 4, Trump announced that his first foreign visit will be to Saudi Arabia, then Israel and the Vatican. He said, “Saudi Arabia is the custodian of the two holiest sites in Islam,” adding, “It is there we will begin to construct a new foundation of cooperation and support with our Muslim allies to combat extremism, terrorism and violence.”

Trump chose to visit the countries cradling the main religions in the world, starting with Saudi Arabia for Islam, Israel for Judaism and the Vatican for Christianity. It seems Trump wants to mobilize the world religiously to fight religious radicalism and terrorism. He is looking to invest in his presence in Saudi Arabia alongside Muslim leaders to enhance his image in front of Muslims who resented him for signing the Muslim ban Jan. 27.

Saudi Minister of Foreign Affairs Adel al-Jubeir praised Trump’s upcoming visit to the kingdom during a May 4 press conference at the Saudi Embassy in Washington. Jubeir described the visit as “historic on all levels.” He talked about his May 3 visit to Congress and his meetings with several senators and congressmen in which they tackled ways to strengthen the US-Saudi partnership in the economic sector, counterterrorism and in fighting the Iranian threat, as well as ways to find a peaceful solution to the Israeli-Palestinian conflict.

In a preemptive step to please Trump ahead of his scheduled visit, Saudi Housing Minister Majed al-Hogail visited Washington to meet May 1 with his US counterpart, Ben Carson, and to propose potential investment projects worth $100 billion to US companies in the fields of housing, infrastructure and real estate funding.

The Saudi Royal Court, which has been preparing its state institutions since mid-April for Trump’s visit, seems to have ignored the US president’s previous comments about human rights and women’s rights, in particular, in the kingdom, and its slackening in reimbursing the United States for defense costs. Saudi Arabia prefers denial in exchange for increasing its political influence in the Middle East to ward off the Iranian expansion and to receive additional backing for its stance supporting Yemen's government in that country's civil war.

Trump is set to hold three meetings in Riyadh between May 19 and 21— the first with the king, the second with Gulf Cooperation Council (GCC) leaders and the third with Arab and Muslim leaders. GCC leaders might have to listen to Trump repeat the criticism of Saudi Arabia he aired during a Reuters interview April 27 when he said, “Saudi Arabia is not paying its fair share [for defense]. We are losing our shirt.”

An informed source in the GCC Secretariat General told Al-Monitor on condition of anonymity, “Despite Trump’s friendly discourse toward Saudi Arabia in his recent speech, some Gulf countries believe that he will bring up the defense money issue again, perhaps more diplomatically, in front of the GCC leaders in Saudi Arabia. Since Gulf governments still rely on US protection [and have] for decades now, they cannot but consign to Washington’s demands and pay their dues.”

Jubeir’s statements May 4, in which he thanked Salman for seeing Trump’s “historic” visit to Saudi Arabia through, point to an official Saudi inclination to support Salman, who established the Islamic anti-terror coalition in December 2015 and the Saudi Vision 2030 for economic reform in April 2016.

In a May 2 interview on Saudi state-run Ekhbariya TV, Mohammed said he knows his country is a target for Iran. If a battle is imminent, Mohammed said, he will make sure it takes place on Iranian soil and not in Saudi Arabia. Trump’s upcoming visit to Saudi Arabia might bear fruit in favor of Mohammed's political aspirations — to gain absolute control in the kingdom and spearhead the Arab and Muslim world leaderships.