US President Donald Trump tells the Saudis what they want to hear, but Russian experts don't expect him to renege on the Iran deal. 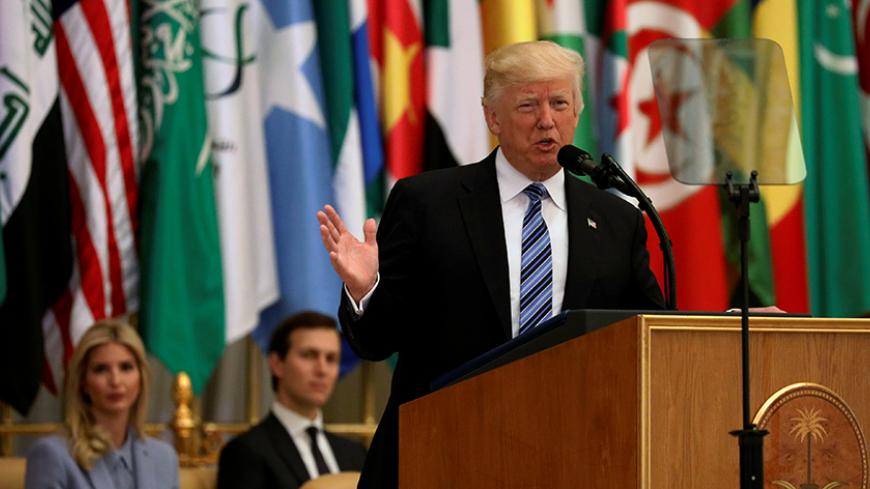 US President Donald Trump delivers a speech during the Arab Islamic American Summit in Riyadh, Saudi Arabia, May 21, 2017. - REUTERS/Jonathan Ernst

Russian media paid little attention to US President Donald Trump's recent visit to Riyadh, Saudi Arabia, but Russian experts, when asked, had plenty to say on the matter.

Trump delivered a speech May 21 to the leaders of more than 50 Muslim countries in which he outlined his vision for US policy in the region and America’s relations with Muslim nations. As international media and experts discussed the meaning of the speech for US policy in the region, even Russia's state-run TV Channel 1 kept silent about the speech during its weekly news program that evening. Instead, it focused on the domestic problems Trump faces, including the prospects for impeachment.

On his weekly TV news show, Dmitry Kiselyov, the head of the biggest state-run news agency, Rossiya Segodnya, mentioned Trump’s visit to Riyadh, but he still ignored the speech. Instead, he paid close attention to the US-Saudi arms deal, which he said indicated a qualitatively different US policy in the region.

“With US support, the Saudis want to establish a new military alliance in the region, which some media call the 'Arab NATO.' Its members will be more sensitive toward Trump’s anti-Iran statements than the more cautious European NATO members. It is dangerous," Kiselyov said.

Russian officials made no public comments, and those Al-Monitor reached either declined comment or simply did not respond. Andrei Baklanov, a Russian Middle East expert and former Russian ambassador to Saudi Arabia, suggested that the lack of response indicates the officials are still investigating how its Middle East partners understood the speech and what was actually accomplished during Trump’s visit. He said Trump’s speech and visit were outstanding.

“As a former ambassador, I always pay attention to the organization of any international visit and I could say that this visit was very well organized. Trump used very nice, warm words while addressing Saudi King Salman [bin Abdul-Aziz Al Saud]. He called Saudi Arabia 'the heart of the Muslim world,' which was highly appreciated by the Saudis," Baklanov told Al-Monitor.

During his Riyadh speech, Trump said he has no plans to impose the American way of life on Middle East nations: “We are not here to lecture. We are not here to tell other people how to live, what to do, who to be or how to worship. Instead, we are here to offer partnership — based on shared interests and values — to pursue a better future for us all."

Baklanov views this part of the speech as very important: “It is a message that Arab nations have been waiting for from an American leader for a long time."

During the visit, Trump and Salman launched the Global Center for Combating Extremist Ideology. Baklanov said, “If this center aims to counter the spread of extremism in the region and fight [the Islamic State] and other radical organizations, it is a good initiative. But if they want to establish a sort of military alliance, it could be negatively accepted in the region."

The most important part of the speech, which attracted the attention of Russian experts, was Trump’s statement that countries in the region should rely more on themselves when it comes to security and fighting radicalism.

Trump's key concern in the Middle East is extremism, said Igor Istomin, a lecturer at Moscow State Institute of International Relations and an expert on Russian-American relations.

“American policy in the region resembles a 'back-to-basics' principle, which means it wants to be influential in the region as it used to be in the early 2000s," he told Al-Monitor. "But on the other hand, Trump wants to mobilize American allies in the Middle East. He assures them that the United States will not leave them, but they should resolve the region’s problems by themselves."

In Riyadh, Trump did not hesitate to lash out at Iran, saying, “From Lebanon to Iraq to Yemen, Iran funds, arms and trains terrorists, militias and other extremist groups that spread destruction and chaos across the region. For decades, Iran has fueled the fires of sectarian conflict and terror.” Trump also called on "all nations of conscience” to work together “to isolate Iran, deny it funding for terrorism and pray for the day when the Iranian people have the just and righteous government they deserve."

However, Leonid Issaev, a Moscow-based Middle East expert, told Al-Monitor, “I don’t think that Trump wants to form any anti-Iran coalition. His aim is to get rid of Obama’s heritage." Issaev suggested Trump's anti-Iran stance is “just a signal to the Saudis that Trump wants to cooperate with them and maintain good relations."

And don't expect Trump to renege on the Joint Comprehensive Plan of Action, Andrei Manoilo, an expert on international relations from the Russian Security Council, told Al-Monitor.

“Despite the anti-Iranian rhetoric, Trump will not annul the nuclear deal, although he, as many other Republicans, view it as a mistake. He could use the deal as a tool to influence Iranian authorities," Manoilo said.

All the Russian experts Al-Monitor spoke with stressed that Russia wants to distance itself from any Iranian-Saudi or Sunni-Shiite contradictions in the region.

"Washington is working against rapprochement between key regional players; this approach only deepens contradictions between them," Konstantin Kosachev, the head of the Foreign Affairs Committee of the Russian Federation Council (Russia’s Senate), told Al-Monitor. "Russia, on the contrary, managed to unite such different countries as Turkey and Iran in the unified negotiation format. Instead of taking on the role of a mediator and peacemaker in the Sunni-Shiite confrontation, the United States has taken a clear position on supporting one side."

Istomin said, “It is very unlikely that Russia could be involved in Iranian-Saudi contradictions.The partnership with OPEC and the Syrian peace talks in Astana, where Russia cooperates with Iran, confirm that. The only possible risk Moscow could face is the misunderstanding of its policy."

“Russia shouldn't pay much attention to Trump’s anti-Iran rhetoric," Issaev said. "It will not lead to serious changes in the Syrian peace process."

According to Baklanov, Trump intentionally plays up the potential Iran threat to scare the Saudis. “I have been in Iran. They have no intention to start a war against the Saudis. Trump’s anti-Iran stance is disappointing," he said.