With the support of Egypt and Jordan, Palestinian President Mahmoud Abbas is hoping that he can slightly change the balance of forces in favor of a fair process in the Palestinian-Israeli conflict ahead of his visit to the United States. 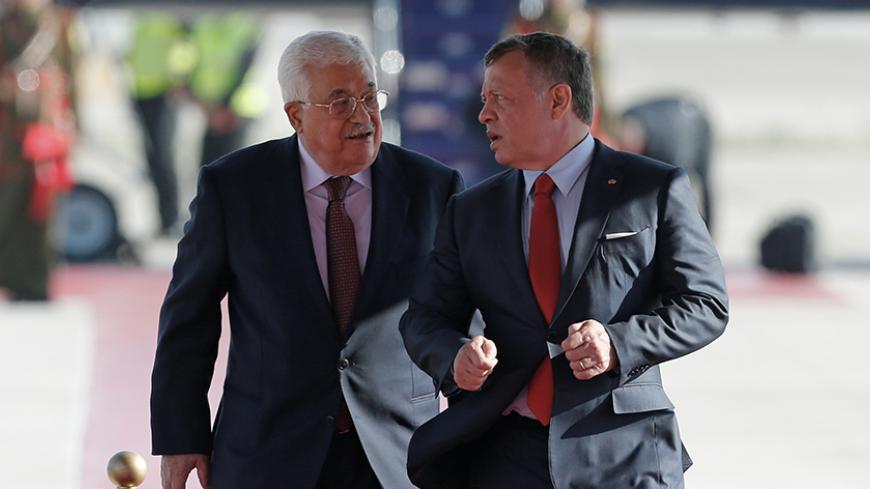 In what seems to be a rite of passage, Palestinian President Mahmoud Abbas visited Cairo April 29 and Amman April 30 before heading to Washington for his important visit to the White House May 3.

The two US allies in the region have become a crucial part of the Palestinian negotiating strategy. While late Palestinian leader Yasser Arafat routinely visited Egypt before any major decision, Abbas has added the Jordanian capital as the second-most important Arab capital in his must-visit plans before any major trip.

Faraneh explained that this is the fifth coordination meeting in the short period since the Jan. 20 inauguration of US President Donald Trump. “Abbas met with the leaders of Egypt and Jordan before the Arab summit in March, during the Arab summit, before the two leaders went to the White House and after the two Arab leaders returned from Washington," he said.

While the majority of the public statements by all parties are focused on the issue of the two-state solution and the Palestinian demands for a settlement freeze in compliance with UN Security Council Resolution 2334, Faraneh believes that there “are many … more practical issues that are being discussed behind the scenes.”

Of major concern to Palestinian negotiators are the reported US conditions for restarting peace talks that US envoy Jason Greenblatt presented in March when he met Palestinian and Arab leaders. The nine-point plan for the United States to accept the two-state solution includes requirements to reform the Palestinian security in coordination with Israel, end the open checks that are sent to Gaza and show in practical ways that Palestinians are opposed to terror.

Speaking to Al-Monitor, Faraneh said that the nine-point plan seems like a carbon copy of the commonly repeated Israeli talking points. “It seems that Jason Greenblatt, like his predecessors, is nothing more than a postman for the Israelis,” said Faraneh.

Some of the decisions in the weeks before Abbas’ departure to Washington appear to be an attempt to respond to some of these demands, such as the reduction of financial support by the Ramallah government to Gaza.

Jamal Shobaki, the Palestinian ambassador to Egypt and the Arab League, reflected in a press conference May 1 at the Palestinian Embassy in Cairo the depth of coordination with Egypt. He said, “We don’t make any move without first asking the advice of Egypt.”

Shobaki also spoke on Egypt’s Dream TV April 29 on the importance of the tripartite coordination. “Palestinian coordination with Egypt and Jordan is crucial in order to counter attempts by Israel to escape from the commitments toward the two-state solution,” Shobaki said.

Speaking to the press after the April 29 meeting with Abbas, President Abdel Fattah al-Sisi stressed the renewed US role in the Middle East. He said, “There is no doubt that the United States is back playing an active role in the restart of Palestinian-Israeli talks.”

Faraneh explained that for Jordan and Egypt, Palestine is a local domestic issue in the same way that Israel has become a domestic issue in the United States. Faraneh further noted that in Jordan especially, almost every Jordanian family has relatives in Palestine. He said, “When someone is killed, Palestinian families open a wake in Jordan." Faraneh listed a number of daily protest events in Jordan in support of the current hunger strike held by the Palestinian political prisoners to prove how close the two countries and their families are.

The pilgrimage to Cairo and Amman are not symbolic visits, nor are they protocol meetings. Egypt and Jordan are quickly emerging as the patrons of the Palestinian leadership’s current negotiating strategy. This was evident in the role of these two countries in the drafting of the decisions at the March 29 Arab summit. The fact that Jordan was the host of the Arab League summit means automatically that Amman holds the presidency of the Arab League until March 2018, when Saudi Arabia will hold the next summit. With the Arabs' largest leading country and the presidency of the Arab league supporting him, Abbas is hoping that he can slightly change the balance of forces in favor of a process that will allow fairness and justice in the difficult Palestinian-Israeli conflict.