US President Donald Trump hit most of the right notes on his visit to Palestine, but what Palestinians need from a peace process is likely not on Trump’s agenda. 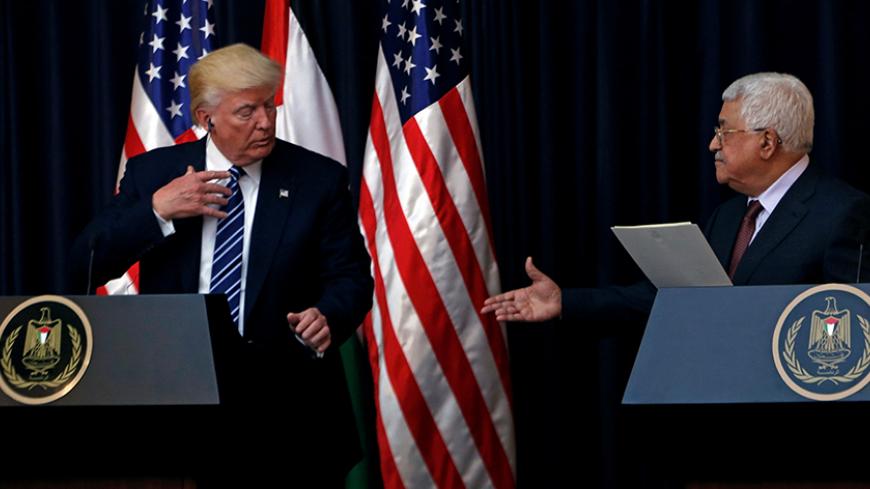 Palestinian President Mahmoud Abbas extends his hand to shake that of US President Donald Trump during a joint news conference at the presidential headquarters in Bethlehem, West Bank, May 23, 2017. - REUTERS/Mohamad Torokman

The extravagant reception that US President Donald Trump found in Saudi Arabia and the gigantic military and trade deals signed there have left many observers confused as to how the trip will affect the Palestinian-Israeli conflict.

By all measures, Trump has hit most of the right notes. He met with Palestinian leader Mahmoud Abbas, visited the Palestinian city of Bethlehem and spoke repeatedly about peace.

Many Palestinians felt that the May 20 reception in Riyadh will not likely translate into an effective US push toward peace. One senior Palestinian official who asked not to be named called it nothing more than a Hollywood-style production. “It is obvious that so much effort has gone into the production aspects of the visit as to render both inconvenient and untimely any serious discussion on the question of Palestine,” the official told Al-Monitor.

A veteran Palestinian editor working in the Gulf also fails to see any direct connection between Trump’s visit and solving the Palestinian problem. Nabeel Khatib, the managing editor of the pro-Saudi Al Arabiya news station, told Al-Monitor, “I think the military deal was driven primarily by concerns regarding Iran’s military ambitions and Saudi attempts to ‘nationalize’ the military industry by stepping up a policy whereby a large portion of the deal (about 50%) will be invested inside Saudi Arabia,” he said.

Khatib, however, does believe that these considerations will also strengthen the US-Saudi relations, especially with the current administration. “The Trump administration is becoming more than ever interested in trying to address the resolution of the Palestinian issue based on the Arab Peace Initiative. And if so, this can indirectly contribute to the Palestinian cause.”

While politicians and analysts are skeptical about the chances of the United States getting seriously involved, some worry that the situation could worsen, as the security and military actors on all sides appear to be holding all the cards.

Oraib Rantawi, the director of the Amman-based Al Quds Center for Political Studies, is concerned that the US president might set the region and the Palestinian cause back. Writing in the daily Ad-Dustour, Rantawi argues that Trump's tour has taken us back to the Dayton/Blair era and the twin tracks of security and economy. “Security, with all its requirements, is what the Palestinian side must provide, going so far as to cease paying salaries to the families of martyrs and prisoners. And the economy is meant as compensation for the Palestinians' inalienable and fixed national rights, or to buy the Palestinians' silence and calm at least, so as to allow Israel to complete its gradual but increasingly rapid gnawing at Palestinian lands, rights and holy sites,” he said in an analysis published May 24.

Rantawi added that what Palestinians want from a peace process is not on Trump’s agenda. “An end to occupation, recognition of the Palestinians' right to self-determination and building their independent state with Jerusalem as its capital, as well as a solution to the refugee problem — this is not on the agenda of businessman Donald Trump, who is not concerned with such matters.”

Perhaps the best sign that the Palestinian issue is not high on Trump’s agenda came during the US president’s visit to Bethlehem May 23. What was to be a half-day visit was reduced to two hours, including a quick stop at the Church of the Nativity and a meeting with President Mahmoud Abbas in his Bethlehem residence. Even this meeting was reduced to one hour and the visit to the church was scrapped, allegedly for fear that families of the hunger-striking prisoners would have tried to confront him. The hunger strike ended the morning of May 27.

What has emerged from the meeting is also telling. Israeli media outlets claimed that Trump expressed anger at Abbas regarding the issue of incitement to violence. Israel’s Channel 2 reported May 28 that Trump yelled at Abbas: “You lied to me in Washington when you talked about commitment to peace, but the Israelis showed me you were personally responsible for incitement.”

The TV report published in The Times of Israel said that Palestinian sources contradict the report, telling Channel 2 the meeting between the two leaders was calm.

Khatib said he doesn’t believe that a serious resolution of the Palestinian conflict is realistic. “But it is good to have a more positive political position by the US administration toward the resolution of the conflict,” he concluded.

For Palestine to be part of the discussion, inclusion in the first foreign tour of a new US president is important. The real question is whether this president is willing to spend the time and political capital not only to bring the sides back to the talks, but to ensure that a resolution is reached and implemented. The present right-wing Israeli government and the makeup of Trump’s team don’t bode well for that.