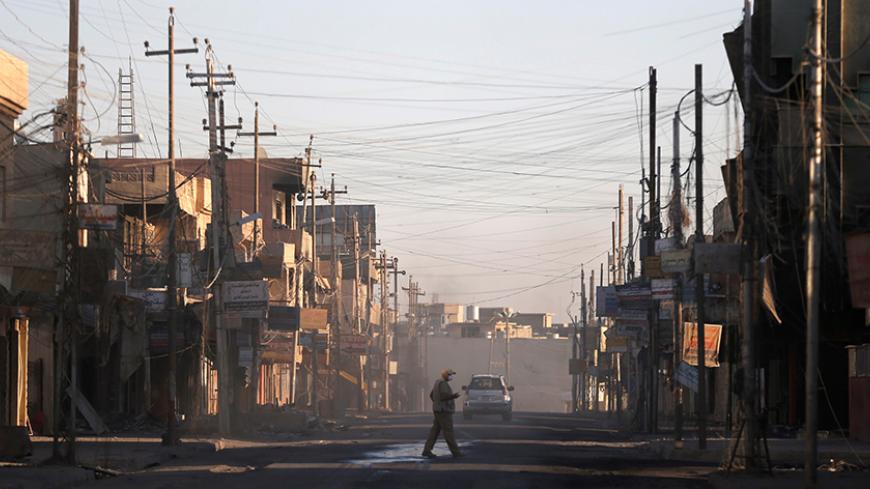 A man walks across a street in Qaraqosh, southeast of Mosul, Iraq, Nov. 25, 2016. - REUTERS/Goran Tomasevic

In the Assyrian-Christian city of Hamdaniya, which its inhabitants call Qaraqosh, 30 kilometers (19 miles) southeast of Mosul, a big house belonging to a Muslim family temporarily hosts a terrorism court as part of the Iraqi Criminal Court, where provincial trials are held. In this beige and orange two-story villa, Iraqi judges listen to prisoners who are accused of being affiliated with the Islamic State (IS) terrorist group and having committed crimes against humanity. At the end of October 2016, when the city was liberated by Iraqi forces, the same house was occupied by IS foreign fighters, which is the reason it is one of the few houses that is not damaged.

Aside from the trials of former IS fighters, weekdays from Sunday to Thursday, around 300 people gather in front of the doors of the villa. These individuals, who arrive at the same time as the IS fighters, are the victims of the three-year IS rule who seek justice. They reach Hamdaniya by private or public transportation from Mosul and its outskirts, or even from the camps for the displaced in Ninevah province, to report the violence they faced. They lost their homes, their cars and their personal possessions, and they bring pictures and documents as proof to show the judges. Many cry out for the disappearance of a family member, a killing and other brutal acts committed by IS in front of their eyes.

On a daily basis, Iraqi special forces guide tens of blindfolded men with their hands tied behind their backs from the prisons in the area, especially from the two detention centers in Qayyara, 60 kilometers (37 miles) south of Mosul, and other makeshift prisons at police stations. They wait for their turn to see the judges, kneeling against the wall while being surveilled by the Iraqi special forces. In the same courtyard, victims and oppressors wait for justice. But the accused are called in faster than the victims.

“Did you pledge allegiance to Caliph Abu Bakr al-Baghdadi?” the judge asked the accused in one of the rooms on the first floor, where Al-Monitor was present to listen to the interrogations.

“What were you doing before joining Daesh [IS]?” the judge asked.

“I was a worker. I joined IS to pay my sister’s medical operation,” Ismail said.

“Do you know how many people died in Mosul in the last three years? Wouldn't it have been better to sacrifice your sister rather than let tens of thousands of people of your city die?” the judge shouted.

One question follows another, but the investigation is based only on the personal confessions of the accused. “Seventy percent of them plead guilty, but few elaborate on the crimes they committed or the battles they joined,” the judge told Al-Monitor on condition of anonymity. “If you listen to them, it seems like they were all working in the caliphate's kitchen,” he concluded, visibly losing his patience.

The judges’ mission is not an easy one. They themselves are residents of Mosul. Before they fled the city in 2013-14, their lives were threatened. Fifteen of Mosul’s judges were assassinated according to Younes Joumali, the chief judge at the court in Hamdaniya, who was attacked multiple times on the way from his house to the court in Mosul in 2014. The judges now assess whether there is enough evidence to bring charges against those who supported IS, under Provision 4 of the Federal Iraqi Counterterrorism Law. The judges then either order the release of the detainees or transfer the accused to Baghdad to face charges.

“Did you repent?” the judge asked another prisoner, Ahmed K.

“Yes, I surrendered,” he stated.

“Do you still have any relationship with Daesh?” the judge insisted.

“No, nothing. I surrendered to the Iraqi forces a few days ago,” Ahmed replied.

“So why did you join Daesh?” the judge asked.

“They were distributing water for free in our neighborhood if we worked with them,” Ahmed said.

“And if you are released, will you go back to the caliph?” the judge said.

“If tomorrow you will be free, will you fight at al-Ayman [western Mosul]?” asked the judge.

“No,” declared the accused.

The judge told Al-Monitor, “They all claim that they repented or have surrendered, but I'm afraid that if we untie their hands, they will behead all of us."

The judge's assistant writes every word the accused pronounces in colloquial Arabic, with the judge dictating the prisoner's statements in formal Arabic, while the lawyer of the accused, paid by the Iraqi state, remains silent and looks bored. Throughout the week and during the interrogations Al-Monitor witnessed, none of the defense attorneys spoke to their assistants or commented on the questions of the judges.

According to the reports of these interrogations, the Criminal Court in Baghdad will decide the final sentence. According to the Iraqi 2005 Counterterrorism Law, prisoners could be sentenced from 15 years to life, or receive the death penalty. This law has been strongly criticized at different times in recent Iraqi history and never constituted a deterrent for terrorist attacks that have continued unabated throughout Iraq.

Further critiques came last summer when the Iraqi parliament approved a controversial amnesty law. Critics argue that especially nowadays it seems inappropriate to apply this law in the current phase in the battle against IS and during the post-IS transitional justice period. The number of detainees held in inhumane conditions is on the rise as the battle continues in western Mosul. The justice process in Iraq remains very approximate, and issued sentences will not prevent the future emergence of terrorist organizations.

In the room next to the accused, Mosul inhabitants have less to say in front of the judge, but more documents to prove what they have experienced. The civilians are asking for compensation, but they already know they will not get any financial assistance for years to come. The priority for the Iraqi government right now is to defeat IS and to regain the territory. The victims will have to wait.