Suicide bomber Salman Abedi’s multiple trips back and forth to Libya, where his family is widely associated with the Salafi jihadi movement, provided ample opportunity for advanced training to execute the massacre in Manchester. 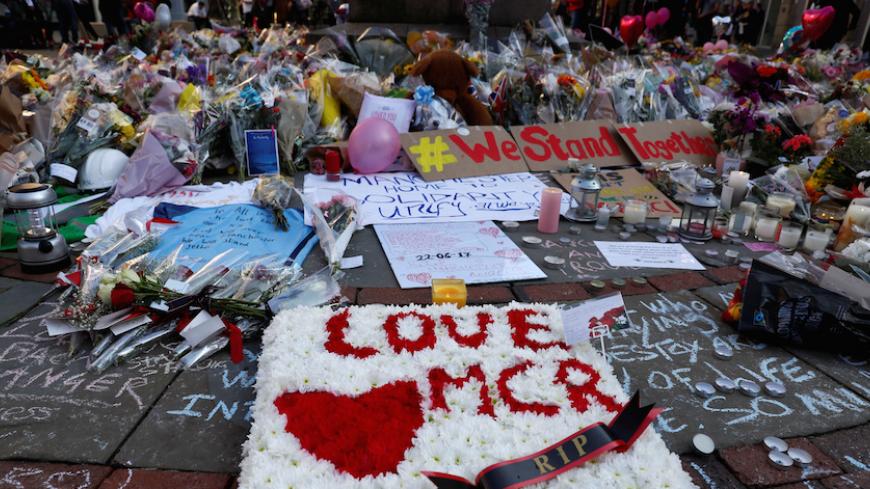 Flowers and messages of condolence are left for the victims of the Manchester Arena attack, in central Manchester, Britain, May 25, 2017. - REUTERS/Stefan Wermuth

If every criminal has a back story, the horrific terror attack that happened May 22 in Manchester, England, was preceded by a sordid mystery novel combining depression, social ostracization, radicalization and multigenerational hate — exactly the kind of story the Islamic State (IS) seeks to prey upon and publicize.

As the investigation into British-born Libyan suicide bomber Salman Abedi continues, the question of whether Abedi was acting alone or affiliated with a larger scheme likely holds the key to unlocking his motivations and the geostrategic significance of his act. Was his crime motivated by his gang connections, his social marginalization or his family’s long history within Libya’s tight-knit activist Salafi movements? Abedi’s back story may represent a unique combination of these elements, but it fits firmly within a similar pastiche of other young people who, due to personal predilections and psychological problems on the one hand and familial and social connections on the other, fall easily into the radical Islamist milieu.

IS media was quick to claim responsibility for the attack, but there is scant evidence that Abedi was acting on IS' direct orders. That is not how terrorism in 2017 works — millennials are the “me” generation, prone to doing things their own way. IS is capitalizing on their initiative. While Abedi’s bomb-making technique matches IS’ trademark methods in previous attacks, the complexity of its construction, including a backup triggering mechanism, exceeds those of the past. In short, Abedi did not seem to be a novice making a bomb by following a YouTube video tutorial. This should come as no surprise given his multiple trips back and forth to Libya — where his family is widely associated with the Salafi jihadi movement. His trips provided ample opportunity for such advanced training and the ability to operationalize his prior contacts in Manchester.

Abedi’s parents fled to the UK as refugees in the 1990s after his father, Ramadan Abedi, was accused of membership in the anti-Moammar Gadhafi and al-Qaeda aligned Libyan Islamic Fighting Group (LIFG), a claim buttressed by former Libyan security officer Abdel Basit Haroum and Ramadan’s reported close friendship with prominent LIFG leader Sami al-Saadi. The Abedis, like many other LIFG and Muslim Brotherhood members, fled to northern England as refugees, settling in a close-knit Libyan community south of Manchester in Fallowfield, where many prominent militants have hailed from, including Abd al-Baset Azzouz, a bomb-making expert known to lead an al-Qaeda affiliated terrorist network encompassing up to 300 militants in eastern Libya. The Fallowfield reputation for harboring terrorists did not end when many LIFG members, including Ramadan Abedi, returned to Libya to fight against Gadhafi in the 2011 Arab Spring, taking advantage of Britain’s relaxed travel policies to and from Libya. While Salman Abedi’s father and most of the family returned to Libya in a suburb of Tripoli, Salman and his brothers, Hashem and Ismail, remained in Manchester ostensibly to finish university.

Lacking parental supervision in Manchester, Abedi did not maximize the educational opportunities presented to him, completing only two years of classes in business management at Salford University before dropping out. Classmates recall a remarkably different Abedi than his rigid Salafi upbringing would suggest. They noted that he used to drink alcohol and smoke marijuana and was involved in a gang. During this time, a young man who was close to Salman and Hashem was stabbed in the neck for crossing into a rival gang’s territory. A family friend in Manchester recalled that the two brothers, thick as thieves themselves, saw the murder as an act of anti-Muslim sentiment, possibly leading them to seek revenge and refuge in extremism. This belief was certainly an indication of their worldview: believing that true Muslims are constantly persecuted for their beliefs. It is mirrored in Abedi’s father’s view that his son is innocent and that his family is now being singled out for persecution due to its rigorous religious observance. Furthermore, the close relationships that hold together underground networks of terrorists are natural substitutes for the sense of belonging and fraternity in gang membership that appeals to young people such as Abedi and his younger brother Hashem.

Abedi’s classmates noticed an abrupt change in behavior that seemed to coincide with his return from a trip to Libya just prior to his leaving university; Abedi adopted Islamic dress, lost touch with former friends and devoted himself to religion. People at both his school and his mosque identified him as a potential threat after he voiced positive opinions on suicide bombings. These sudden personality shifts and pendulum-like swings between extremes are frequent characteristics of terrorists and indicate a level of mental and emotional instability and detachment from reality that frequently paves the road for manic and extreme behavior.

Abedi’s radicalization and his execution of the attack was likely facilitated by others in his community, and in Libya, even if he did not completely confide his intentions to his companions. The southern Manchester area where he resided has produced known IS operatives and recruiters, some of whom lived less than a mile from the Abedi brothers — attending the same local Didsbury Mosque, where Abedi’s father used to occasionally lead prayers. In particular, security sources are investigating Abedi’s relationship with two IS recruiters, Amir Khalil Raoufi and Raphael Hostay, both killed in Syria in the past three years and hailing from the same neighborhood.

Since the arena bombing, another male from the neighborhood has been arrested. German intelligence revealed that Abedi passed through known hot spots of extremism, Dusseldorf and Frankfurt, twice since 2014 and may have traveled to Syria, where it is alleged that he received paramilitary training. Proof of Abedi’s ties to an international IS network entrenched within Libya and the UK and with a history of connections to Iraq, Syria and Afghanistan demonstrate that IS emerged from the seeds planted by previous waves of jihadi movements. IS is not a new phenomenon; it merely reconnects existing jihadi networks in a new way. This is crucial to remember as despite recent military setbacks for IS in the Levant and in the Libyan city of Sirte, the movement is able to fall back upon its base — pre-existing jihadi networks.

Although American airpower was reasonably effective in helping Misratan militiamen push IS out of Sirte in December, there is no doubt that IS has regrouped in pockets of Libya’s ungoverned space and that Libyan territory constitutes the most easily accessible training ground for an attack against Europe or European interests, such as oil and tourism in Tunisia and Algeria. Such attacks took place in 2014, 2015 and 2016 and all were masterminded in Libya. If reports from the pro-unity government Rada brigade anti-terrorism force claiming that Hashem confessed his allegiance to IS and was conscious of his brother’s plans are verified, this attack should be seen as a deadly warning for those who believe the battle against IS will be won with a traditional counterterror approach of bombs and targeted killings.

The communication between Tripoli and Manchester certainly provided the young men with a level of training and coordination that emboldened a 22-year-old to execute such a massacre and remain undetected throughout the planning phases. With such established networks linking northern England to Afghanistan, Iraq and Libya, all it takes is one disgruntled young person, the internet and a passport to inflict worlds of suffering upon the West. These networks are even easier to activate when IS draws upon individuals already within the jihadi community –— such as Abedi.

Those who support military-only solutions to the war on terror should be wary that for every IS militant killed in Libya, there are dozens of susceptible recruits and individuals already within the jihadi milieu reachable online and willing to inflict violence in Europe. Hence, the geostrategic significance of this attack is to present an urgent need to re-evaluate the whack-a-mole way the war on terror is currently being fought. Western nations must embrace holistic intranational solutions that strengthen systems of governance in places such as Libya and empower Muslim communities in the West and Middle East to fight the “religious war” within Islam themselves. The Donald Trump administration would be wise to rethink its complete dismissal of America’s traditional role in international diplomacy surrounding Libya. Appointing a US special envoy tasked with mediating Libya’s civil war would be a good first step.

Lydia Jabs contributed to the research and writing of this article.