The Jordanian media censored an interview King Abdullah gave to The Washington Post, where he said 96% of Islamic State terrorists captured and killed last year were of Palestinian origin, which provoked confusion in the kingdom. 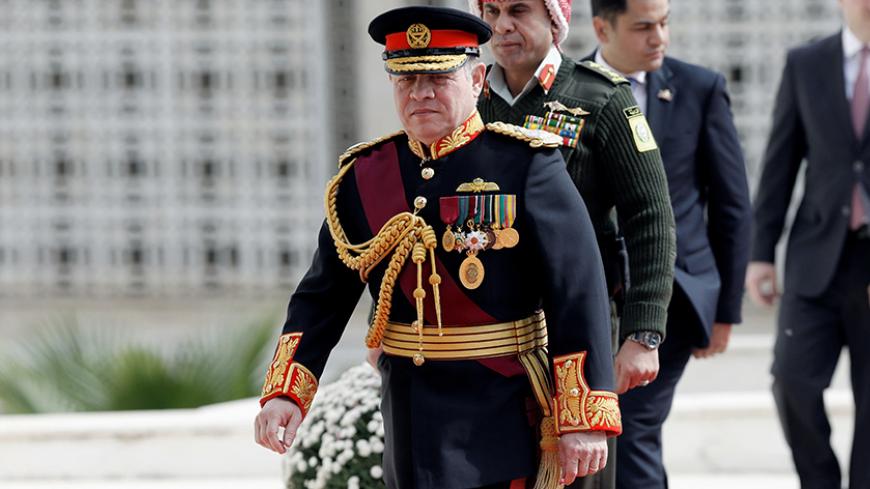 In a surprising remark, Abdullah noted in the April 6 interview, “In 2016, for the first time, we captured and killed 40 [Islamic State] terrorists in two major incidents. Ninety-six percent of them were of Palestinian origin.” He added, “So if we don’t move the Israeli-Palestinian process forward, that is a major recruiting [opportunity] for disenfranchised and frustrated people.”

However, when the government media printed the king’s remarks, they inaccurately translated the king to avoid publicizing the potentially uncomfortable sections. The 96% statistic was removed from Petra News, and the regime-censored version did not refer to Palestinians as “terrorists” in contrast to Abdullah’s own words. Even Al-Ghad newspaper, which bills itself as Jordan’s most independent paper with the slogan “Right to Know,” deleted the embarrassing sections from the interview.

Jordanian political analyst Katrina Sammour explained that the explosive nature of the king labeling such a high percentage of IS terrorists as Palestinian forced newspapers to censor this part of the interview. She told Al-Monitor the 96% description would increase “resentment between Palestinians and Jordanians even more. Palestinians will feel that they are being attacked, and Jordanians will feel that Palestinians are a threat to society.” Due to political sensitivities, Amman does not publicize data about the percentage of Jordanians of Palestinian descent, but The New York Times estimates that the number is up to 60%.

A prominent Jordanian journalist, who insisted on anonymity due to the risks of directly critiquing Abdullah, told Al-Monitor that saying 96% of IS terrorists in Jordan were Palestinian was inappropriate since it “keeps reminding people where they came from and stigmatizes them, linking terrorism to their origin.”

Given the ongoing Israeli-Palestinian conflict where Jordanian media consistently portrays Israel as the aggressors and the Palestinians as victims, the king’s remarks were especially surprising. Kirk Sowell, an Amman-based political analyst and principal of Utica Risk Services, a Middle East-focused political risk firm, told Al-Monitor, “In Arabic, you would never say this. You can’t refer to Palestinians as terrorists. I am not surprised they [Petra News] edited it since it’s a very sensitive issue.”

In addition to the potentially offensive nature of Abdullah’s remarks, many disputed the accuracy of his statement to The Washington Post. “The statement was wrong. I don’t believe Palestine is a main drive for people to join terrorist groups in the Jordanian scene. The youth are feeling disenfranchised, there is government corruption and it is an authoritarian regime,” explained Sammour, who has written extensively on radicalism in the Hashemite kingdom.

With over 70% of Jordan’s national population under the age of 30, Sammour emphasized that the needs of the youth are not being adequately met. “The government has not allowed any alternative speech to be introduced or platform for young people to feel that they are expressing themselves, actually being heard and participating in the decision-making process,” she said. Approximately 2,000 Jordanian fighters have joined IS in Syria and Iraq, including the son of Jordanian member of parliament Mazen Dalaeen, who carried out a suicide attack in Anbar province.

Abdullah’s Washington Post comments are noteworthy given the Hashemite kingdom’s “Raise your head, you are Jordanian” campaign ongoing across Amman since 2015. The government’s message is encouraging national pride for all of its citizens, including those of Palestinian and East Bank descent.

“There is a fiction that there actually is no distinction” between Palestinians and East Bankers, said Sowell. The king’s comments highlighting the fact that the overwhelming majority of IS terrorists captured or killed in 2016 were of Palestinian origin “contradicts the superficial unity,” he added. With the vast majority of sensitive positions in the Jordanian security services awarded to East Bankers while Jordanians of Palestinian origin maintain significant influence over the private sector, “there are real problems of identity,” Sammour stressed.

While clarifying that the king’s motive of raising awareness in the West about establishing a Palestinian state is noble, Mohammed Hussainy, the director of the Amman-based Identity Center think tank, disagreed that Jordanians join IS due to Israel. He told Al-Monitor, “It is clear that IS is not mentioning the Palestinian cause in their media or as a goal.” IS has mainly focused on fighting Shiites, Kurds and Yazidis, Sowell pointed out. Noting that IS combats other Muslims, former Jordanian lawmaker Hind al-Fayez told Al-Monitor, “I’d rather that they [Jordanian youth] join Hamas instead of joining IS because Hamas is entitled to fight the Israelis for protecting their land.”

The Jordanian media’s approach of censoring such sensitive information is naive with the spread of the internet and Facebook and no longer guarantees — as it did decades ago — that the public is shielded from controversial subjects, Bassam al-Badareen, the Amman bureau chief for Al-Quds al-Arabi, told Al-Monitor.

Frustrated by the king’s insistence on linking national origin to radicalism, the Jordanian journalist said, “We are all Jordanians regardless of where we come from. It doesn’t mean if he is originally Palestinian, he is more prone to be a terrorist.”

Editor's note: This article has been updated since its intial publication.