The regional visit of US President Donald Trump revealed that he supports an anti-Iran coalition of Sunni countries and that he is determined to broker a deal between Israel and the Palestinians. 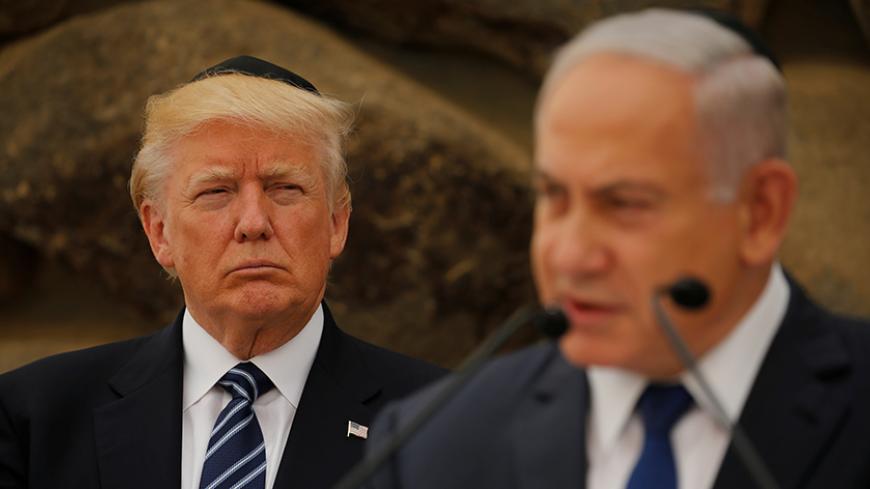 Israeli Prime Minister Benjamin Netanyahu talks as US President Donald Trump listens during a ceremony commemorating the 6 million Jews killed by the Nazis in the Holocaust, at Yad Vashem Holocaust memorial, Jerusalem, May 23, 2017. - REUTERS/Jonathan Ernst

President Donald Trump’s visit to the Middle East May 20-23 has revamped US policy in the region and established two main positions: first, that Washington stands behind a coalition of Sunni Arab states allied against an expansionist and subversive Iran and radical Islamist organizations; and second, that the United States will act vigorously to bring about Israeli-Palestinian negotiations on an agreed solution to the historic conflict between the two peoples.

The day Trump was elected, but before the results were known, I wrote in Al-Monitor about a missile attack by Houthi rebels, Iranian proxies, from the Red Sea coast. I ended it on the following note: “Even if the next US administration preserves the nuclear agreement, the United States cannot remain indifferent to the new threat posed by Iran to the freedom of navigation between Asia and the West. Let’s hope that the role the United States assumes in this struggle will be consistent and leading, rather than transitory and marginal.”

Trump left no doubt that he would work to fulfill this modest wish during his visit to Saudi Arabia by unreservedly supporting the alliance of Arab states seeking to repulse the radicals in the Muslim world. In regard to Israeli-Palestinian negotiations, Trump clearly wants to be an honest broker. He is a friend of Israel and is committed to its security, but he does not accept the right wing’s ideological premise of Israel’s biblical right to absolute ownership of the entire Land of Israel. He also does not accept the right’s claim that Palestinian President Mahmoud Abbas does not want peace and is not a partner for making peace.

For the past five years, I have been urging the establishment of a defense pact between Israel and the Arab states that are as fearful as it is of Iran’s imperialistic policies. Such a pact should be a part of any Israeli-Palestinian agreement. The proposed pact would lend security significance to the 2002 Arab Peace Initiative and make Israel more secure and defensible without controlling another nation.

Such a pact would also enable Israel to place its defensive capabilities at the disposal of states in the region with which it will be at peace. The direct route that Air Force One took in transporting Trump from Riyadh to Tel Aviv symbolizes the axis that a consistent US policy in the region could promote. Still, the obstacles standing in the way of the deal that Trump says he seeks are almost all to be found in the domestic political arenas in Jerusalem and Ramallah.

Abbas opponents could derail a US initiative, despite it being the last chance for realizing their people’s national dream. Hamas opposes an agreement with Israel based on religious and ideological reasons, but judging by past experience, given diplomatic progress and an economic upturn, Hamas' influence on the Palestinian public will wane. The bitter and miserable experience of the organization’s rule over Gaza, which marks the 10th anniversary of it in June, has done nothing for its prestige.

On the other hand, the hunger strike by Palestinian prisoners in Israeli jails, led by jailed Fatah leader Marwan Barghouti, demonstrates that the threat to Abbas lies within his own camp. With determined leadership, however, and efforts to contain his opponents in a bid to take advantage of the historic opportunity presenting itself, Abbas can prove to Trump and to the entire world that this time, the Palestinians have no intention of blowing their chances.

Israeli Prime Minister Benjamin Netanyahu’s problems at home are just as complex. Two-thirds of the prime minister’s governing coalition would like to see a US initiative fail. Some openly admit it. Netanyahu has been careful not to clash with the Republican president, but a clash with his right-wing political base is no less daunting for him.

Numerically speaking, there is a majority in the Knesset to provide political and parliamentary backing for talks with the Palestinians, but it is highly doubtful whether Netanyahu has the political courage of the late Prime Minister Ariel Sharon, who withdrew from Gaza and parts of the northern West Bank in 2005. Netanyahu would prefer to undermine any initiatives by setting embarrassing conditions for Abbas, especially forcing him to make certain declarations, conditions for which Netanyahu could mobilize sufficient Israeli public support and thereby place the ball in the Palestinians' court.

This will be the test of the Israeli opposition: Will it toe Netanyahu’s line and blame the Palestinians for the failure of a US-backed diplomatic initiative, or will it confront him courageously? In the final analysis, the decision will be up to the people of Israel, who need someone to tell them the truth and not what the polls indicate they want to hear.