Why Abbas turned Biden down 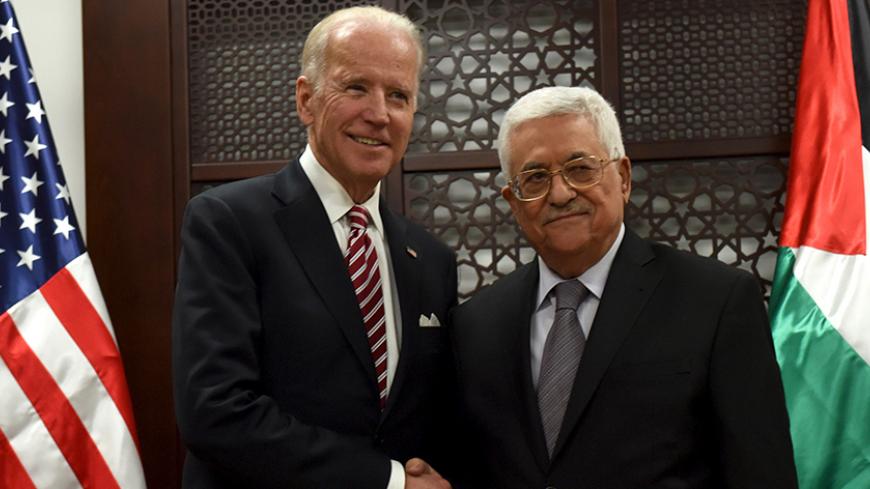 When US Vice President Joe Biden, in the course of his meeting with the Palestinian president, proposed renewing negotiations with Israel on March 9, Mahmoud Abbas broke out in a wide smile. “He didn’t want to make Biden feel bad, so his smile didn’t turn into a big laugh,” a source close to the chairman’s office told Al-Monitor on condition of anonymity.

Abbas, who was pushed to the corner three years ago and forced to hold negotiations with Israeli Prime Minister Benjamin Netanyahu at the initiative of US Secretary of State John Kerry, now understands that his rival has no real intention to advance a diplomatic solution, now or ever, and also grasps his own political situation. To take dramatic diplomatic steps, a leader needs not only initiative, honesty and trust between the two sides, but also political strength at home.

Biden traveled to meet Abbas in Ramallah a day after the attack in Jaffa in which American citizen Taylor Force was murdered. Biden succeeded in extracting a condemnation of the murderous rampage from the president, but Abbas also asserted that Netanyahu’s refusal to advance a diplomatic process had led to this situation and that the Palestinian Authority makes enormous efforts in cooperation with the Israel Defense Forces and the Shin Bet to prevent further security deterioration.

According to the Palestinian source, Abbas told Biden that only a diplomatic solution — the creation of a Palestinian state and the abolition of the injustices of the Israeli occupation — could have prevented the current outburst of violence. At this point, said the source, the US vice president pulled out his proposal to renew the peace initiative between the sides.

So why did Abbas laugh? And why did he reject out of hand a diplomatic process with Israel, a moment after he told the vice president that a political solution would have prevented the current violent uprising? The answer is that Abbas simply does not trust Netanyahu’s intentions.

Abbas' diplomatic experience with Netanyahu, including during the Kerry-driven negotiations, left him with the impression — one shared by all the senior Palestinian leadership — that the Israeli prime minister isn’t negotiating in order to reach a diplomatic agreement, but to stonewall. He believes that Netanyahu wants to appear in the international arena as someone intending to move toward a diplomatic compromise that would have succeeded if Abbas hadn’t caused it to fail. “You can ask Tzipi Livni how serious we were, and how Netanyahu kept her on a tight leash,” Abbas told Biden, according to the Palestinian source.

But it was not only his mistrust for Netanyahu, the right-wing Israeli government and even the upswing in settlement construction in the territories that led Abbas to brush off the American feelers on renewing negotiations. The Palestinian president is well aware of his own political situation right now and of the complicated reality in the field.

Even if Netanyahu were serious in his diplomatic intentions, or if another leader headed the Israeli government and sincerely wished to reach a diplomatic compromise, the Palestinian leader still needs a wide base of support. There was a good reason Netanyahu's conditions against the return of Palestinian refugees and for a Palestinian recognition of Israel as a Jewish state came up during the conversation with the vice president. These momentous issues have enormous opposition among the Palestinian public, including within the Fatah ​movement. If in the past, one could have perhaps overcome them with creative solutions, now, in Abbas' current political reality, there’s no chance that these Israeli demands would be met with understanding by the Palestinians — even if this would guarantee a Palestinian state.

In the past, Abbas had hinted that he doesn’t see the right of return as a make-or-break issue. In an interview on Israeli Channel 2 in November 2012, he declared that even though he is a refugee from Safed, in northern Israel, he doesn’t think of returning there. “Palestine now for me is the ’67 borders, with East Jerusalem as its capital," he said in the interview. "I am a refugee, but I am living in Ramallah. … I believe that [the] West Bank and Gaza is Palestine … and the other parts [are] Israel.”

Abbas' assent to dictates from Netanyahu, who had utterly humiliated the Palestinian chairman in the past, would now be seen by Palestinians, including senior members of his movement, as capitulation to the Israelis. In this situation, no Israeli compromise could make up for that.

Abbas' smile at Biden’s proposal meant, "Now you remember, when the United States is about to have an election?" What chance is there that a diplomatic initiative could be concluded in just a few months? After all, the previous round of talks, which lasted more than a year, didn’t even get to the essential issues.

It seems that Abbas' term will end not over a democratic process failing to take place in the Palestinian Authority, but because of the vehemence of opposition to his rule among the general Palestinian populace.

From their standpoint, the Palestinians don’t have high hopes for the US elections. In their opinion, neither Donald Trump nor Hillary Clinton nor even Bernie Sanders will solve the Israeli-Palestinian conflict and force Israel to end the occupation. The only path for the Palestinians, they believe, is to take action themselves in pursuing recognition by the United Nations with European support and hope for a lot of luck.