Israel is at loss over revelations that President Donald Trump exposed sensitive intelligence information to Russia. 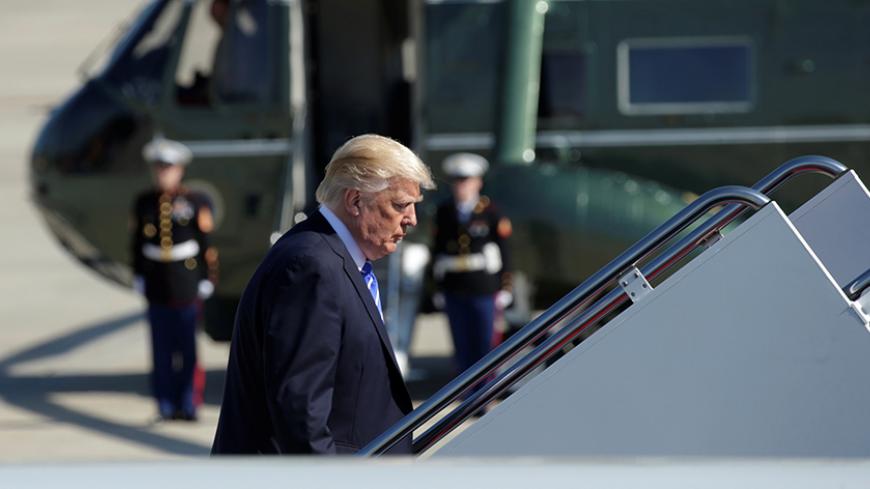 US President Donald Trump boards Air Force One as he departs from Joint Base Andrews in Maryland, May 17, 2017. - REUTERS/Kevin Lamarque

As President Donald Trump's May 22 arrival in Israel approaches, everything that can go wrong in the relationship between the White House and the Israeli Prime Minister's Office seems to be going wrong. Until recently, both parties had kept their dirty laundry indoors. In the last two days, however, more and more problems have come to light, turning into a very public feud.

There was the president's packed schedule during his upcoming visit, the US’ refusal to allow Prime Minister Benjamin Netanyahu to accompany Trump to the Western Wall and elusive responses from the US administration about its position on the Western Wall's status and whether it falls under Israeli sovereignty. Each made headlines in Israel over the past few days, but suddenly disappeared when it was reported on May 16 that the source of the intelligence that Trump had shared with Russian Foreign Minister Sergey Lavrov was none other than Israel.

Since the Washington Post's May 15 report that Trump had shared intelligence with Russia, every effort has been made by the United States and Israel to minimize the damage and coordinate positions. It was obvious to both sides that this was a hydrogen bomb for the media and that the more specific claim that Trump had shared particularly sensitive Israeli intelligence with Russia — a close ally of Iran in the Middle East — would eventually leak to the press. The claim did, in fact, leak to The New York Times and NBC. As soon as it reached the Times, Ron Dermer, the Israeli ambassador in Washington, released a statement to the paper affirming that Israel and the United States would continue to maintain close ties in all matters pertaining to the war against terror. He also said, “Israel has full confidence in our intelligence-sharing relationship with the United States.”

At the time of this writing, Israel has not officially responded to the possibility that Trump shared Israeli intelligence with Russia. At the same time, Dermer's statement reduced tensions between the two countries, at least publicly. It is still reasonable to assume that the real fire is burning out of control behind closed doors, especially in the various branches of Israeli intelligence.

If the US president actually is close to the Russian government, which, in turn, is particularly close to the Iranian and Syrian regimes, this presents a real strategic problem. Until just a day ago, this possibility had been in some back drawer, reserved for the most extreme scenarios. Then, according to reports, it just happened: The president gave the Russian foreign minister especially sensitive clandestine intelligence about the Islamic State's plans for a terrorist attack. According to foreign news sources, this intelligence was behind the US decision to ban laptop computers in the cabins of flights to the United States from a long list of Middle Eastern countries. It is safe to assume that Israel is praying that Trump did not hint to Lavrov about the identity or nature of its sources.

All of this is unfolding at a time when intelligence cooperation between Israel and the United States is closer and more comprehensive than ever. It reached this level during President Barack Obama's administration despite the poor personal relationship between the countries' two leaders. The rise of Trump should have invigorated and intensified this golden age of intelligence cooperation, but then Trump proved that in his administration, nothing can be taken for granted.

“The Americans have really benefited from the material we shared with them over the past few years,” one top Israeli intelligence official told Al-Monitor just a few weeks ago, speaking on the condition of anonymity. “They regularly receive valuable intelligence in real time, allowing them to conduct precision operations in the region. This contributes to the fight against the Islamic State and the prevention of jihadist terror.”

As all intelligence operatives in the West know, Israel has long provided the highest quality intelligence about the war in Syria and Iranian activity in the Middle East. The question now is what will Israel do with that intelligence? Will it keep especially sensitive information to itself and refrain from sharing it with Israel's closest ally, the United States?

Only one person in Israel can make that decision: Netanyahu, who is also the direct commander of Mossad. The Israel Defense Forces' Military Intelligence Directorate falls under the chief of staff, who is, in turn, under the minister of defense, but even then, the prime minister is the final authority on issues of this sort. The crisis is unfolding during the most sensitive period in the two countries' relationship, with Netanyahu trying to figure out what Trump actually wants from him, what his diplomatic agenda is and what happened to all of the pro-Israel statements from his presidential campaign.

There can be no doubt that the issue of intelligence sharing will be raised in talks between the two leaders when Trump visits Israel, but these talks will take place behind closed doors. There can be no doubt that the issue will also be raised in ongoing, intimate talks between the heads of the US and Israeli intelligence agencies, who have an especially close relationship and share unprecedented trust. Yossi Cohen, the director of Mossad, and Maj. Gen. Herzl Halevi, the head of the Military Intelligence Directorate, will certainly be considering how to handle such a sensitive issue. Their American colleagues are under the direct authority of the commander in chief, making it impossible to suggest to them that they should keep particularly sensitive information — or at the very least, the sources of that information — from him.

Israel will have to weigh the importance of its close relationship with the United States on matters of intelligence against protecting its strategic sources of information and its vital security interests. As strange and unprecedented as it may be, when it comes to its important relationship with the United States, Israel currently finds itself in the position of being the responsible adult.