Jerusalem Day and the country without a capital

Even Donald Trump wants to keep the peace in Jerusalem, which is more than can be said of Benjamin Netanyahu's government. 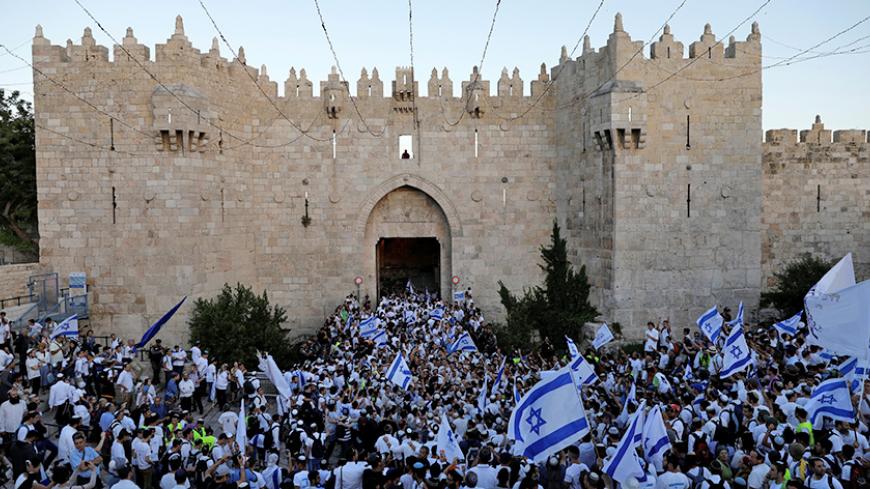 Israelis celebrate as they hold Israeli flags during a parade marking Jerusalem Day, the day in the Jewish calendar when Israel captured East Jerusalem and the Old City from Jordan during the 1967 war, Damascus Gate, Jerusalem's Old City, May 24, 2017. - REUTERS/Ronen Zvulun

On May 22 in Jerusalem, US President Donald Trump affixed his signature to a note and tucked it between the stones of the Western Wall in accordance with Jewish tradition. On June 1 in Washington, Trump will sign a waiver suspending the move of the US Embassy in Israel from Tel Aviv to Jerusalem. He will tuck the signed suspension of the 1995 act mandating the embassy transfer into an Oval Office drawer, where it will gather dust until he pulls it out in six months and extends the suspension.

Trump — like all three of his immediate predecessors, Democrats Bill Clinton and Barack Obama and Republican George W. Bush — is expected to sign the document that says moving the embassy to Israel’s self-declared capital (international law does not recognize it as such) would endanger US national security interests. Had House Speaker Newt Gingrich not been lured in 1995 into taking part in the political dirty trick that resulted in passage of the controversial embassy bill, engineered by AIPAC and Likud, his good friend Trump would not have been obliged to disappoint his “very good friend Benjamin,” as Trump referred to Prime Minister Benjamin Netanyahu in a May 23 speech.

Israelis are used to the reality that the US Embassy is located in Tel Aviv and never made a big deal over it. The current ruckus over moving the embassy is a reminder that on top of the United States not recognizing East Jerusalem, annexed to Jerusalem in 1967, as part of the Israeli capital, it has also never actually recognized de jure Israel’s sovereignty over West Jerusalem. This is why the United States has avoided opening an embassy at the building designated for it in West Jerusalem, within the 1967 line.

The US law on moving the embassy was preceded by damaging and populist Israeli legislation. The Basic Law: Jerusalem, Capital of Israel, adopted by the Knesset in 1980, stipulates, “Jerusalem, complete and united, is the capital of Israel.” It resulted in the unanimous passage of UN Security Council Resolution 478, with the United States abstaining, determining that the legislation was “null and void and must be rescinded forthwith.” The resolution called on the foreign embassies located in Jerusalem at the time to pull out of the city, which they did.

Thus, a handful of Israeli pyromaniacs led to Israel being the only country in the world where the seat of its parliament, president, government and Supreme Court is not recognized as its capital by any other country. The annexation of Jerusalem's walled Old City and the villages in East Jerusalem captured in 1967 are considered a violation of UN resolutions and international law.

Even as Trump, who has earned a reputation of volatility, remains careful not to make moves and declarations that might damage the delicate fabric of life in Jerusalem, the Israeli regime is rocking the boat. Government agencies are helping organizations of Jewish settlers move into Palestinian homes in the area known as the Holy Basin, around the Old City, to establish a Jewish majority there and undermine any prospect of a diplomatic resolution of the conflict with the Palestinians. Thus, for example, a report by the anti-settlement organizations Ir Amim and Peace Now finds that between 2014 and 2016, 20 Palestinian families were evicted from the village of Silwan, which settlers call the City of David, at the foot of the Western Wall, to make room for members of the right-wing Ateret Cohanim. An additional 100 Palestinian families are under threat of eviction.

The annual marking of Jerusalem Day, on May 24 this year, has become a raucous, nationalist demonstration of Israeli ownership of the city, in general, and the Muslim Quarter of the Old City, in particular. Tens of thousands of youths affiliated with religious Zionism march through the Muslim Quarter on their way to the Western Wall, waving Israeli flags and calling out slogans peppered with curses at the Palestinian residents hiding out in their shuttered homes. Instead of defending the Palestinians against these power-drunk youths, the police oblige merchants to close their shops along the parade route and to stay away. This year, to mark the celebration of the 50th anniversary of the “liberation of Jerusalem,” the police permitted the extension of the so-called dance of the flags to include the walls of the Old City from the Jaffa Gate to the Dung Gate.

A well-known Israeli public figure wrote several years ago, “Pushing thousands of youths once a year into Arab alleys in a kind of dance mixed with screaming, instant patriotism, religious fascism or, if you’ll excuse me, pure bad taste, is bad, very bad.” He suggested that the Jewish affinity for Jerusalem be expressed in silent prayer on the Temple Mount rather than in “logistical operations transporting young people in the middle of the night, holding flags and screaming themselves hoarse.” The writer is no left-wing, anti-religious zealot. He is former Knesset member Moshe Feiglin, affiliated with the ultra-right wing of Netanyahu’s Likud. His comments appeared in 2011 in the right-wing Makor Rishon and are available on his Facebook page.

Jerusalem’s only saving grace is the closing on the evening of the parade of dozens of kiosks, bars, restaurants, stores and cafes in the western part of town in solidarity with their fellow Palestinian merchants in East Jerusalem. Some 50 business owners signed a petition against the damage inflicted on the Old City traders and hung signs of support on their doors.

Another encouraging gesture is that while thousands demonstrated in support of claims of Jewish ownership of the city, an unusual event took place in the Palestinian neighborhood of Sheikh Jarrah. Zehava Gal-On, leader of the left-wing Zionist Meretz, joined fellow lawmaker Ayman Odeh, head of the Joint List, and Mahmoud al-Habash, religious and Islamic affairs minister for the Palestinian Authority, at Jerusalem’s American Colony Hotel. The three signed a joint declaration calling on the Israeli government to reach an agreement with the Palestinians on ending the occupation based on the 1967 borders, with East Jerusalem as the capital of the Palestinian state and the western part of town accorded international status as the capital of Israel.

In a study that I edited 15 years ago with Nimrod Goren on the various moves leading to the US law on moving the embassy, we wrote that US presidents had been blocking the move due to a desire to safeguard stability in the Middle East, to nurture ties with friendly Muslim states and to avoid providing ammunition to radical Muslim states and organizations. We also wrote that there were no indications that these long-term interests would disappear in the foreseeable future. We can only welcome the fact that the current US administration is well aware of these interests and rue the Israeli government’s continued recalcitrance, buttressed by the hollow slogan of a “unified Jerusalem” and a flag raised in defiance.

That said, at the end of each day, Israeli ministers go home. They drive back to Tel Aviv, the Etzion settlement bloc in the Jerusalem suburb of Mevaseret Zion. None of the ministers who hail unified Jerusalem as the capital of Israel actually live in the city.