Contrary to past Sabbath crises, this time Israeli Prime Minister Benjamin Netanyahu is refusing to cede to ultra-Orthodox demands. 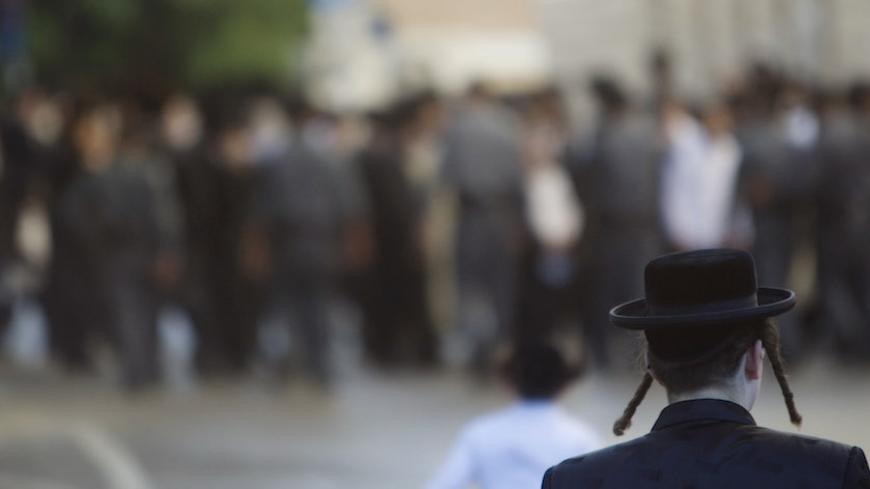 An ultra-Orthodox Jew takes part in a protest against the opening of a road on the Sabbath, near a religious neighborhood in Jerusalem, June 23, 2012. - REUTERS/Ronen Zvulun

For several days now, ultra-Orthodox Israelis are in an uproar over a Supreme Court decision to allow the opening of grocery stores and entertainment hubs on the Sabbath. The chairman of the Knesset's Finance Committee, Moshe Gafni of the ultra-Orthodox Yahadut HaTorah party, sounded especially pugnacious in a radio interview he gave to Reshet Bet on May 4 when he said, "The issue of the Sabbath is a real political crisis."

While Gafni’s statement was sharp in tone, he could not hide what was obvious for everyone in the political sphere, including Gafni himself: that the ultra-Orthodox do not really want to break up the coalition, especially because Yair Lapid, the chairman of the opposition Yesh Atid party, is lurking right around the corner. Ever since Lapid promoted the drafting of the ultra-Orthodox into the military during the third Netanyahu government, they consider him a political enemy. According to the most recent polls, Lapid will be running against Prime Minister Benjamin Netanyahu in the next election.

That is why a meeting between Netanyahu and leaders of the ultra-Orthodox factions at which Gafni was present seems to have laid the foundation for a resolution to the current crisis. Ultra-Orthodox factions announced that they reached an agreement to transfer authority over enforcement of the Sabbath Rest Law from Minister of Welfare Haim Katz to Minister of the Interior Aryeh Deri.

The conflict over the Sabbath began after an April 19 Supreme Court ruling that approved a bylaw passed by the municipality of Tel Aviv, allowing for some 160 small supermarkets and kiosks and another 80 businesses in three commercial centers to remain open on the Sabbath. As soon as the court's decision was released, the ultra-Orthodox factions entered crisis mode. This included veiled and somewhat less-veiled threats by the ultra-Orthodox that they would quit the government, as well as harsh attacks against the Supreme Court. At a religious gathering in Tel Aviv, Rabbi Shalom Cohen, the head of the party's Council of Torah Sages, mocked the justices of the Supreme Court, calling them "deprived people. They are 'captive' Jews." Cohen went on to say that the party should take up the fight against this law, even if it means leaving the government.

While they were making these belligerent statements, the three leaders of the ultra-Orthodox factions — ultra-Orthodox Shas Party Chairman Deri, Minister of Health Yaakov Litzman and Gafni — were negotiating with the prime minister to resolve the crisis. It was obvious to the trio that Netanyahu would be unable to meet all of their demands, at least officially. At a meeting May 3, the ultra-Orthodox representatives called on the prime minister to advance a law circumventing the Supreme Court, which would make municipal bylaws subject to the approval of the minister of the interior. Furthermore, they asked that he be given the authority to enforce labor law over hours of work and rest.

That is how Deri, Litzman and Gafni found themselves trapped in a crisis that was forced upon them over an issue that is considered iconic to the ultra-Orthodox community: maintaining the status quo on the Sabbath — when shops are closed and no public transport is available in several cities on Saturdays. Had the Supreme Court's ruling not received such extensive coverage in the ultra-Orthodox press, Deri, Litzman and Gafni could have happily turned a blind eye to the ruling.

Much of the ultra-Orthodox pressure was directed at Deri, who, it was claimed, did not really work hard enough as minister of the interior to prevent the Supreme Court from issuing its ruling. His political rivals, including former Shas leader Eli Yishai, were even more outspoken in their criticism. Yishai, who also had served as interior minister, accused Deri for the "fiasco" because he refused to make decisions that would establish facts on the ground and make the Supreme Court discussion superfluous. "It was irresponsible behavior, which left a fateful decision at the doorstep of the Supreme Court. … The Sabbath was sold and desecrated. … It is a disaster for the Jewish state in the Land of Israel," said Yishai.

In contrast, the prime minister and his Likud ministers did not seem to be overly upset about the situation. They realized how much damage they could suffer at the polls if they succumbed to ultra-Orthodox demands by trying to pass the law circumventing the Supreme Court. Senior members of the Likud clearly recalled how Lapid grew stronger in the polls last summer at their expense. The reason was that Netanyahu gave in to ultra-Orthodox demands and ordered that work on the light rail scheduled on the Sabbath be canceled. Hundreds of thousands of riders, including many soldiers and a large secular population, suffered from the enormous chaos that ensued due to interruptions on the rail lines and directed their anger toward the authorities. The damage to the Likud was enormous. This time, Netanyahu had no intention of falling into the same trap, especially since there is a growing sense of impending elections hovering over Israel.

Despite all their attempts to use the media to send a message to the prime minister, the ultra-Orthodox will not walk away from this crisis with any real gains. Netanyahu rejected their demand for a law to circumvent the Supreme Court, though he did agree to petition the court to hold another hearing on the matter before an expanded panel of judges. Another achievement was the transfer of authority over enforcement of the Sabbath Rest Law from Katz to Deri.

The bottom line is that it looks like Netanyahu has managed to contain the current Sabbath crisis by giving the ultra-Orthodox a few token achievements to show their constituents before the next election, which is right around the corner.