Arabs in Israel as well as in the Gulf states might pay lip service to defending the rights of Palestinians under Israeli occupation, but meaningful commitment has often been lacking. 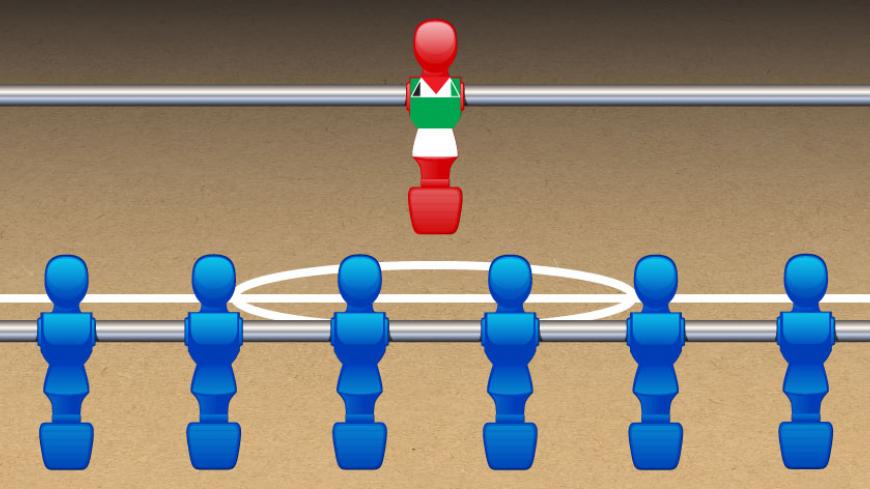 “We are not looking for suspension or expulsion of Israel, we want full recognition of our rights,” thundered Jibril Rajoub, the dedicated president of the Palestinian Football Association, at a May 11 conference of FIFA, the international soccer federation, in Bahrain. Specifically, Rajoub demanded that FIFA ban Israeli clubs from playing on Palestinian territory, by which he meant the soccer fields of six Israeli settlements on the occupied West Bank: Elitzur Ironi Yehuda, Hapoel Oranit, Hapoel Jordan Valley, Beitar Ironi Ariel, Beitar Givat Ze’ev and Ma’ale Adumim.

Rajoub forgot to mention that among the Israeli soccer clubs playing on Palestinian territory, when hosted by one of the six settlement clubs, are dozens of teams consisting of his own people, such as those from the Arab Israeli towns and villages of Kfar Kassem, Jaffa, Rahat, Qalansawe and elsewhere. Not only that, but half a dozen Palestinian Arabs play for the settlement soccer teams on the occupied Palestinian territory to which Rajoub referred. Thus, when the managers and players of the Arab Israeli Shimshon Kfar Kassem team arrive for a match at the soccer pitch in the settlement of Ariel, they know they will not be confronting players from the adjacent Palestinian villages on the West Bank. They will also not be seeing their elderly Palestinian aunt who lives in one of those villages sitting in the bleachers. According to Israeli regulations, only Palestinians working in Israeli settlements or providing services to the Israelis living in them are allowed to enter their territory.

The Palestinian leadership is well-aware of the tricky situation in which Israel’s Arab minority has put Rajoub and his friends from the Palestinian Authority. After all, what moral right do the West Bank Palestinians have to demand that Israelis boycott sports teams, when some of the teams have Arabs on their rosters and play in the settlements?

A well-known Arab member of the Knesset who asked not to be identified told Al-Monitor that a proposal has been discussed in internal forums to issue the Israel Football Association with an ultimatum: Unless the home games of the settlement clubs are moved from the West Bank to the sovereign territory of the State of Israel, all 60 Arab Israeli teams would withdraw from the Israeli soccer leagues. Such a move would invariably result in the collapse of several of the lower leagues. That same legislator said the High Follow-Up Committee for Arab Citizens of Israel prefers to sit this one out in the bleachers.

Former Knesset member Mohammad Barakeh, the chair of the High Follow-Up Committee — an umbrella organization of Israeli Arab groups — told Al-Monitor, “There’s no justification for being party, whether directly or indirectly, to the plans of the occupation forces to portray normalcy in a situation that is neither normal nor legitimate.” Then why does his committee avoid taking a stand on the direct cooperation between the Arab Israeli soccer clubs and the Israeli military occupation of Palestinian territory? When I asked, he promised that the committee would “examine in the coming days its practical position in accordance with its principles.” Al-Monitor will follow these deliberations in the coming days.

Solidarity with their Palestinian brethren in the occupied territories is not a strong suit of Palestinian citizens of Israel, and not only when it comes to sports. While it is possible to find volunteers among Israeli Arabs who assist patients from the territories, still one counts no more than five Arab Israelis among some 700 volunteers for the Road to Recovery, a nonprofit organization that drives thousands of desperately ill Palestinians to hospitals in Israel and East Jerusalem from the roadblocks separating Israel and the West Bank and Gaza. Arab Israelis make up 20% of Israel’s population. That said, one should not lose sight of the fact that Arabs in Israel are themselves a minority engaged in constant struggle against discrimination, exclusion and racist legislation. Unlike them, their brothers in the Arab oil-producing states enjoy an abundance of cash, power and influence.

US President Donald Trump will reportedly take the opportunity of his May 20 visit to Saudi Arabia to push forward a huge arms deal, potentially worth $300 billion over the coming decade, between his country and the wealthy oil producer. It is hard to overstate the significance of the deal toward fulfilling Trump’s campaign promise to create thousands of new jobs in American industries as a key to boosting growth.

Who knows better than Trump that in business, there’s no such thing as a free lunch? The question is whether the tab that his hosts will sign for the arms deals will include the Saudi Peace Initiative, which served as the basis for the 2002 Arab Peace Initiative. Will the Saudis be satisfied with the modest appetizer served up by Secretary of State Rex Tillerson in the form of a clear hint that Trump’s desire to promote a peace initiative supersedes the promise made by candidate Trump to move the US Embassy from Tel Aviv to Jerusalem?

Israel already understands that on June 1, Trump will join the ranks of his three predecessors, who all used their power to freeze implementation of the 1995 law mandating the embassy's move to Jerusalem. In fact, the presidential waiver signed each year by successive presidents cannot be interpreted as a goodwill gesture to the Palestinians, but as the necessary dismantling of an explosive device, avoiding further escalation in Israeli-Palestinian tensions.

US national security adviser H.R. McMaster declared on May 12 that during Trump's visit to Israel and the Palestinian Authority, the president will declare his support for the “Palestinian aspiration to dignity and self-determination.” It's the least Trump could do. At most, one can regard it as firing up the engines of Air Force One ahead of Trump’s flight to the East. After all, Israeli Prime Minister Benjamin Netanyahu has already “handed” the Palestinians the right to self-determination: Next week will mark the eighth anniversary of his 2009 Bar-Ilan speech, in which the prime minister said, “We are ready to agree to a real peace agreement, a demilitarized Palestinian State side by side with the Jewish State.” This would have to be anchored by international security guarantees and Palestinian recognition of Israel as the state of the Jewish people.

Trump’s visit to Riyadh two days before his arrival in Israel is a test of the Arab world’s commitment to their Palestinian relatives living under Israeli military occupation since the June 1967 war. It especially tests the solidarity of the wealthy and influential rulers of the Gulf states. Similarly, they are being presented with an opportunity to rectify their indifference toward the slaughter in Syria. If they conduct business as usual with the New York businessman, the peace process can go back to where it belongs — the satire columns. If they merely pay lip service to peace instead of making a true commitment to their own peace initiative, we should start preparing for the next war.