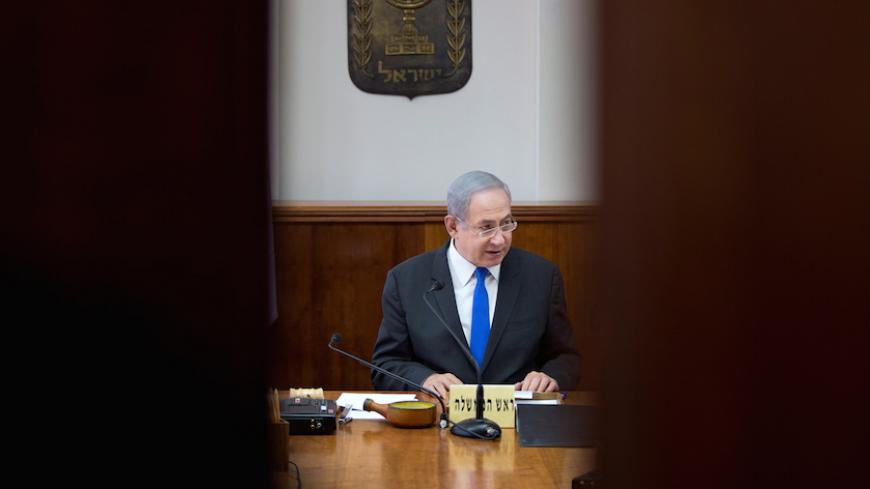 For six years, as far back as when he was a member of Knesset for the Kadima Party, Avi Dichter tried unsuccessfully to advance his Nationality Law, a Basic Law that could be revoked only by special majority that would define Israel as the state of the Jewish people, with all that this implies legally and legislatively. On May 7, Dichter, who is now the Likud chairman of the Knesset's Foreign Affairs and Defense Committee, registered a personal achievement when the Ministerial Committee on Legislation agreed to approve the law and pass it through the Knesset's legislative process as a government proposal.

The Nationality Law is controversial in Israel because it disrupts the delicate balance between the two main features of the country as both Jewish and democratic. The law provides legal sanction to efforts to bolster Israel's Jewish identity at the expense of other values, such as the equal and respectful treatment of minorities. One example of this is the law's designation of Hebrew as the country's sole official language (contrary to Hebrew and Arabic currently), a fact that ignores the 1.8 million Arabs who make up almost one-quarter of the population. Moreover, Israel’s Declaration of Independence, the founding document establishing Jewish sovereignty over the land of Israel, already validates Israel as the homeland of the Jewish people.

While Dichter celebrated his victory with all sorts of announcements to the press and media interviews, he also discovered that like many of his coalition colleagues before him, Prime Minister Benjamin Netanyahu stole the show from him. Netanyahu hasn't been particularly involved over the past few years in getting this law passed, fearing that it could cause him considerable public damage. Now, however, he realized that this display of nationalism will be well-received by the Israeli public, so he placed it at the top of the agenda at the Likud faction meeting on Monday. Dichter was forced to keep his mouth shut. He could only stare while the prime minister denied him the chance to take any credit for this achievement.

Netanyahu is well-known for stealing credit from others. Finance Minister Moshe Kahlon and Transportation Minister Yisrael Katz can both testify to that, as they watched Netanyahu take credit for several of their own achievements over the past few years. In the case of the Nationality Law, however, what Netanyahu did takes the whole idea of stealing credit to a different level. This isn't some construction project intended to ease Israel's housing crisis (Kahlon), nor is it some ribbon-cutting ceremony for a new railroad line (Katz). It is legislation promoting a particular world view, much like other recent right-wing legislation. And so, it is similar to the Muezzin Law, which limited hours of loudspeakers calling to the mosques, and legislation against left-wing organizations, which are designed to intensify nationalist sentiment among the Jewish population.

Celebrating an almost unexpected gift, Netanyahu began his comments to the media by describing the Nationality Law as a major triumph. A careful reading of his speech indicates that these sentiments and approach will become part of his agenda during his next election campaign. Netanyahu’s plan is to amplify nationalist sentiment and present himself as the person best suited to the task of defending Jewish sovereignty in Israel. All this while Naftali Bennett, the chairman of HaBayit HaYehudi, challenges him as leader of the right.

"We continue to lead Israel in our own way, firmly insisting on Israel's interests, on Israel's national honor and on Israel's truth," Netanyahu said. In the past, the term "national honor" was reserved for Bennett and Chairman of Yisrael Beitenu Avigdor Liberman.

According to the prime minister, he plans to submit the Nationality Law to the Knesset "in the next 60 days." He said, "The bill establishes the fact that Israel is the nation-state of the Jewish people in its historic homeland. It enshrines our flag, our anthem and Jerusalem as our eternal capital. … There is no contradiction between the law and the equal rights of all citizens of Israel. We believe and support it [equal rights]. The two are dependent on each other. The law is a crushing answer to anyone who tries to deny the deep connection between the people of Israel and its land. The Likud will advance this law, and I expect all the Zionist parties to support it."

The message that Netanyahu relayed was as clear as can be. Anyone who does not support the law is not a Zionist. This constitutes a distinct electioneering agenda, no matter how you look at it. After his yearslong public struggle against the Iranian nuclear program, which ended with the signing of an agreement between Tehran and the superpowers, Netanyahu needs a new agenda to spearhead his campaign. His struggle against the media helps, but it is not enough. Diplomatic negotiations with the Palestinians are out of the question. On the other hand, a focus on national honor touches a sensitive point among all Israeli right voters.

That is why Netanyahu made a point of saying at that same Likud faction meeting that the need for honor impacts all of his decisions. He claimed that New Zealand and Ukraine, which led the "anti-Israel vote in the UN Security Council" (Resolution 2334, which determines that the settlements are illegal), are now looking for ways to get closer to Israel. The reason, he explained, is the firm stance taken by Jerusalem after the vote. "My friends," he said, "the nations of the world respect those who respect themselves. I will not lower my head, I will not be smug and I will not grovel. I am acting now like I acted in the past and like I will continue to act, for the benefit of the State of Israel."

Later in the day, the prime minister posted a brief video to his Facebook page under the title "Go Figure." The video shows Netanyahu standing before an Israeli flag as he says the following: "All the people who tell us that they believe we should leave Judea and Samaria in order to ensure that the State of Israel remains the nation-state of the Jewish people are the most vocal opponents of the Nationality Law, which defines the State of Israel as the nation-state of the Jewish people."

Netanyahu is preparing for the next election, and the Nationality Law will be a major tool in his campaign. The difference between the very essence of this law and the legacy of former Likud leader and Prime Minister Menachem Begin, who was a staunch defender of equal rights for the Arab minority, is further evidence of changes to the Likud over the past few years. Begin didn't need controversial legislation in order to increase Israel's sense of Jewish identity. As former Likud Minister Moshe Arens wrote in an article in Haaretz in 2014: "It is a Jewish State, because the majority of the population is Jewish, because the dominant language spoken is Hebrew, because most of the books published here are Hebrew books, and most of the songs sung here are Hebrew songs. Because the national anthem is ‘Hatikvah,’ and the national flag is blue and white and bears the Star of David, and because the army is the Israel Defense Forces."