Iraqi forces advance from north ahead of ‘extremely violent’ fight

As the Iraqi joint forces launched an operation to capture the last Islamic State-held enclave in Mosul, the fight is getting harder and putting civilians at risk. 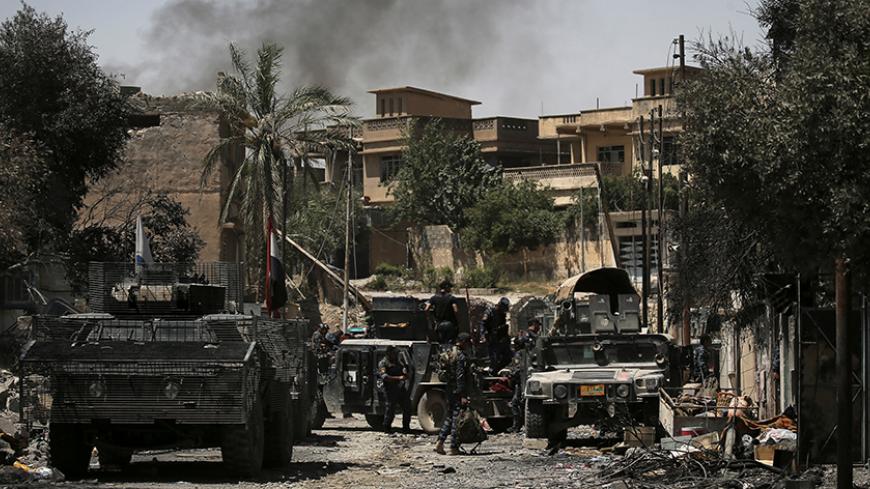 Members of the Iraqi rapid response forces and the Iraqi federal police move between their vehicles during clashes with Islamic State fighters in western Mosul, Iraq, May 27, 2017.

MOSUL, Iraq — Iraqi joint forces launched an operation to liberate the last Islamic State (IS) pockets of resistance in the Old City of Mosul on May 27. After roughly two months of scant movement on the southern front lines of west Mosul, a push from the northwestern axis in early May had steadily gained ground against the remaining IS-held areas, paving the way for the latest moves.

Loudspeakers and flyers dropped over the city have at various points called on civilians to use corridors created by the Iraqi forces, which Iraqi security analyst Hisham al-Hashimi told Al-Monitor marks a turnaround from the coalition strategy when operations began in October to retake the largest city held by IS in Iraq.

“The coalition initially encouraged civilians to remain in their homes, but IS forced them to change their strategy to corridors” and “scorched earth tactics” after the civilians have come out, he said.

The army’s Ninth Armored Division and the Emergency Response Division (ERD), which answers to the Interior Ministry, continued clearing areas inward from the outlying homes into residential areas on this northern axis throughout much of May.

The more densely populated urban areas farther south vary starkly from the mostly low-slung homes and villas in the northwestern reaches, but both have streets and neighborhoods utterly destroyed by the fighting.

Many civilians were seen streaming out of the recently retaken areas during Al-Monitor’s visit to the July 17 district in late May.

Dozens of women mostly dressed in black had flipped the face-covering part of their niqabs on top of their heads, revealing pasty white faces that had long not seen the sun and were now burned red in an hour of walking. Their exposed faces served at least partially as a precaution against security forces mistaking them for being in an alliance with IS.

A few still wore their niqabs and turned their faces when photographers tried to take pictures of them. Some small boys were seen carrying makeshift white flags.

Many infants born in a city that had been entirely besieged for months were seen in tired women’s arms, the tiny bodies listless under the hot sun, red-faced and barely moving.

Wheelbarrows and half-broken wheelchairs were being used to transport the injured and the elderly.

At a field hospital in the July 17 district, Maj. Mohammad, the commander of the medical section of the Iraqi army’s Ninth Division, told Al-Monitor that the vast majority of those leaving the recently liberated areas were suffering from hypotension and dehydration.

He cited “sniper wounds, mortar wounds and many dehydrated babies” when asked what he had seen the most of in previous days.

Soldiers carried in a disheveled man with a bushy black beard and a metal brace on one leg. He said his leg had been broken a month ago by a mortar and he had been treated within IS territory. He pulled up his shirt to reveal several other wounds, including a ragged line of black stitches.

Muthana Salah Ali, who said he was 31 and had seven children and two wives, denied strenuously that he had been treated by “IS medical facilities,” stressing that the hospital in the besieged area had been run entirely by civilians. The concern was presumably that the soldiers might think he had had anything to do with the transnational terrorist group under which the city had been living since June 2014.

Mohammad then pulled Al-Monitor away and said that he did not know whether the man was telling the truth, but that he would be treated and then have his identity ascertained.

“This girl, instead, is someone you should talk to,” he said. Nada, 21, had just had her laptop searched by the medical coordinator. “She has only good things on it, like songs,” such as the “Titanic” theme song, he said.

The girl was carrying an English textbook and several photos of her fiance, who she said was still stuck in IS-held areas.

Just outside, near a position from which ERD officers piloted white reconnaissance drones from a roof, graffiti scrawled in large red letters stated that “lovers of Hussein have been here” in reference to the Muslim Prophet Muhammad’s grandson, revered by Shiites.

Red spray paint is used throughout the city by the various Iraqi forces to indicate “safe ways” using arrows on corners of homes, walls and rubble to direct to roads that have been cleared.

The following day, Al-Monitor came across the corpse of an alleged IS fighter in the gutter, face down, clothes shredded by some sort of blast and head covered by dirty white cloth.

The home he seemed to have been running from still had weapons and remnants thereof strewn around it, with metal packaging that had contained former USSR-produced blank cartridges and Serbian-made projectiles, a camouflage rifle holder and a list of code numbers used by IS fighters on their walkie-talkies to refer to areas of the city and the various divisions of Iraqi forces.

US Col. Patrick Work, an officer in charge of about 1,800 soldiers helping to “advise and assist” the Iraqi forces around Mosul, told The Washington Post recently that the last few IS-held neighborhoods “will likely be the most difficult to retake despite nearly eight months of street-by-street fighting” and that it will be “extremely violent.”

Hashimi told Al-Monitor that “there is still no safe passage” for civilians.

The Old City, he noted, has seven entrances to it, but the civilian corridors mapped out are all problematic in that there are “50 IS fighters stationed at each of the two gates leading to the north, Bab al-Sinjar and Bab al-Masjid,” and the eastern reaches of the part still under IS control “is basically a minefield.”

He added that Ahmad Khalaf al-Jabouri, the IS military commander for Mosul, is a former special forces officer who had shown his prowess in keeping Iraqi forces at bay for months.

The federal police, he noted, “were unable to advance more than 150 meters [164 yards] from March 7 until late May.”

“The fight will not be easy” even for the last remaining sections of the besieged, severely damaged Old Mosul, he stressed, and the “vast destruction left in its wake may lead to a political crisis.”