In wake of Rouhani's win, conservative rivals vow to remain on scene

While President Hassan Rouhani’s victory was called a landslide by some, Iran’s conservatives will give the president a tough fight in implementing campaign promises. 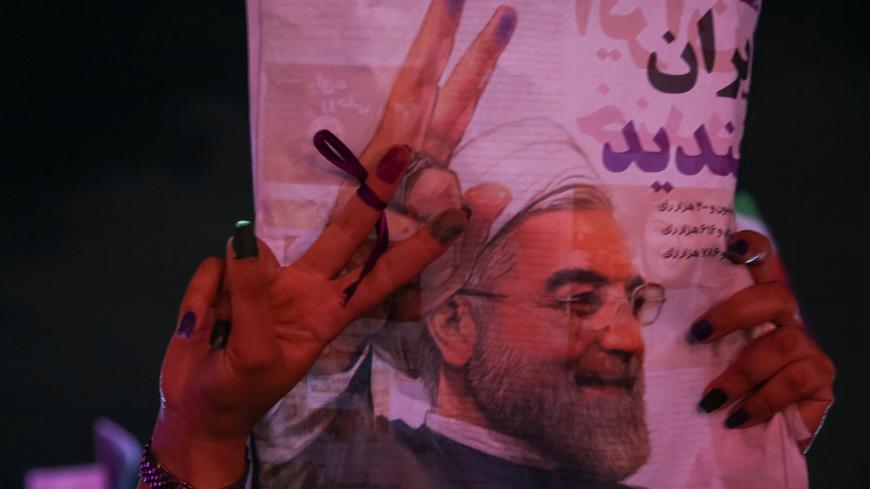 A supporter of Iranian President Hassan Rouhani holds a poster of him as she celebrates his victory in the presidential election, Tehran, May 20, 2017. - TIMA via REUTERS
Arash Karami
@@thekarami
May 21, 2017

Iranian President Hassan Rouhani, who promised more interaction with the world and more social freedoms, won re-election May 19 with 57% of the vote. His conservative rival, Ebrahim Raisi, who received approximately 16 million votes to Rouhani’s 23 million, conceded defeat but vowed to remain a loyal opposition, as did large swaths of conservative media in the country.

In a statement shortly after the election, Raisi, who heads Iran’s largest religious endowment and ran a populist campaign, did not congratulate the president on his election victory. Instead, Raisi listed the achievements of his own campaign, in particular raising the issues of poverty and corruption, two areas he vowed to continue to fight for. The statement also complained of election violations that he said would pursue.

In a warning to Rouhani, Raisi added that the 16 million who voted for change “cannot be ignored in the country’s political arena nor decision-making.” But Raisi did wish the administration and the president success in “addressing the economic concerns of the people.”

Supreme Leader Ayatollah Ali Khamenei also did not congratulate the president. Khamenei thanked the Iranian public for the high voter turnout and said that it is they who are the winners of the election. In a statement released to the media, Khamenei asked the president to solve issues facing the lower classes and the poorer regions and to confront corruption and social ills.

In a televised address, Rouhani said, “Today the world knows that the nation chose a direction toward cooperation with the world and opposed to violence and extremism.” He said the most important message the vote sent was that “the nation wants to live in peace and friendship with the world and at the same time will not accept humiliation or threats.”

In an indirect comment toward the trip of Donald Trump to Iran’s regional rival Saudi Arabia and the $100 billion arms deal arrived at during the visit, Rouhani said, “Our election announced to our neighbors and the region that the path to safeguard security in this region is democracy and respecting the vote of the people and not relying on foreign powers.”

Rouhani thanked the 41 million Iranians who came out to vote. He also thanked late Ayatollah Akbar Hashemi Rafsanjani, whose support in the 2013 presidential election was instrumental in his election victory. In a daring move, Rouhani also thanked former President Mohammad Khatami, despite the media ban on mentioning his name due to Khatami’s support for the 2009 opposition Green Movement leaders.

Rouhani said that he would be president for all Iranians, even those who are opposed to him and his policies, and that he would work to serve all political parties and social classes.

Rouhani has a tough road ahead working toward his many campaign promises. In his final campaign speech, Rouhani criticized the judiciary, state television and the economic monopolies of the Islamic Revolutionary Guard Corps companies. He also made a pitch to have all sanctions on Iran removed, which would require Khamenei’s blessing to have direct talks with the United States on Iran’s missile program and human rights, among other issues. In various speeches before that, Rouhani also criticized discriminatory laws against women and spoke in support of freedom of speech and minority rights.

The unelected institutions in Iran will not quietly allow Rouhani to implement his campaign promises. Neither will the conservative media. The editor of Kahyan newspaper, Hossein Shariatmadari, who is selected by Khamenei, offered a critique that suggested conservatives are not conceding that the president has a mandate. Rather, Shariatmadari wrote that Rouhani had four years to campaign whereas Raisi only had two months. Shariatmadari added that Rouhani and his administration used all the resources and platforms of the government to promote the incumbent. The editor also criticized the president for scaring people by suggesting that a vote for Raisi was a vote for war with Western countries. Shariatmadari concluded that all things being equal, Raisi would in fact have received twice the votes. While Shariatmadari holds no administrative position, his talking points often reflect what other conservative officials advocate.