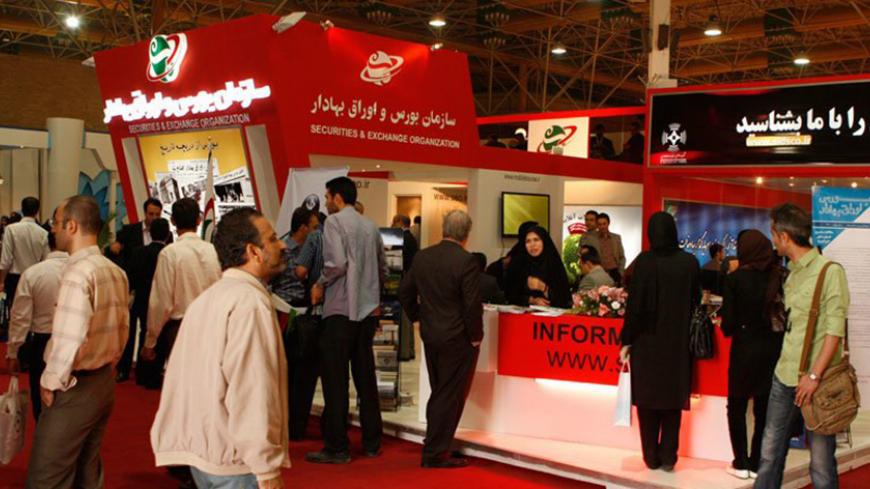 One of the driving factors behind the reluctance of foreign companies to engage with FINEX 2017 was the uncertainty over the future of Iran. Overshadowing the expo was the hostile rhetoric between Tehran and Washington and the upcoming May 19 presidential elections, which some argue could lead to the election of a conservative president.

As such, the presence of Foreign Minister Mohammad Javad Zarif at the opening ceremony of the exhibition was perhaps an attempt to highlight the event in the face of negative sentiment against Iran. The moderate administration of President Hassan Rouhani believes that Iran’s ambitious economic objectives cannot be achieved without the strong presence of multinational investors in the Iranian market. This might be why Zarif, who served as Iran’s top nuclear negotiator, in his April 15 speech attacked those criticizing the nuclear deal, which put an end to crippling sanctions against the country.

“If the Joint Comprehensive Plan of Action was not signed, Iran’s crude oil export could not exceed 1 million barrels per day [bpd] now,” he said, referring to the more than 2.6 million bpd of crude being exported about one year after the implementation day of the nuclear deal. In other remarks, Zarif also noted that the state of Iran’s financial sector has improved significantly over the past 12 months.

The most striking speech, however, was that of Sattari, who urged authorities to move from a resource-based economy to a knowledge-based economy. It would be a “strategic mistake” if authorities keep relying on oil and gas as a major source of revenue, he said. “We need to adopt an entirely new culture in the financing industry to make startups and tech companies grow,” he said, praising the rise of 3,000 knowledge-based companies in the country over the past three years.

In this vein, the second-largest Iranian equity market — Iran Fara Bourse (IFB) — was authorized by the Securities and Exchange Organization (SEO) to dedicate a hall for emerging fintech (financial technology) companies on the sidelines of FINEX 2017. The effort, dubbed FinStarts 2017, was aimed at connecting tech-based entrepreneurs with investors. This event was the second of its kind ever held in the country, with 50 fintech firms taking part. Amir Hamouni, the CEO of IFB who spoke at the closing ceremonies of the event on April 18, said officials are planning to launch a permanent online secretariat this year to help provide immediate financial support to smart and innovative ideas if need be.

Crowdfunding is another practice that Hamouni said IFB is pursuing to help fund fintech projects by raising monetary contributions from a large number of people. He expressed hope that the instrument, along with emerging venture capital funds, would be a good way to boost fintech in the country. When asked about major barriers to a more mature market, Hamouni told Al-Monitor that legislation related to fintech must be updated. He also warned that financial institutions must either adapt to new conditions or face serious challenges, as the fintech industry is set to boom. “Merger and acquisition could be a good solution for financial institutions to avoid bad days,” he said in an interview with Al-Monitor on the sidelines of the event.

It appears that the Rouhani administration intends to staunchly support private fintech companies, though influential semi-private firms that are already involved in the app market might resist giving up their market share. Alireza Daliri, an official from the vice president’s Office for Science and Technology, noted in an interview with Al-Monitor that his team had done its best to keep state-affiliated groups away from the fintech industry to help improve competition. But he acknowledged that despite a recently approved law that puts a 5% cap on state companies’ share in knowledge-based companies, some semi-state organizations still try to get a larger piece of the cake.

Observers believe that the financial regulator has in broad terms appropriately managed the market by trying to review and adapt domestic practices, standards and procedures to international norms in the past year. Ahmad Araghchi, an SEO board member, told Al-Monitor that sanctions cut off Iran’s access to global financial markets for years, resulting in a lack of common literature between Iran and global markets. “We already took measures to fix this problem,” he said, noting that his organization has to also address a weak information technology (IT) infrastructure. “We’ve been negotiating with global software and hardware majors to earn their expertise and technical support to remove our IT shortcomings,” he said, adding that some contracts in this vein have already been signed.

If not all, at least some European companies agree that the situation is getting better in Iran’s financial markets. A representative of a multinational company who participated in FINEX 2017 said European and Asian investors have been increasing their “awareness” of the Iranian market in the past six months. The financial consultant, who spoke with Al-Monitor on the condition of anonymity, said his company, a multinational professional services firm, already has clients in France, Germany, South Korea and Japan who are weighing whether to enter Iran’s financial market. He pointed out that the Iranian regulator is aware of the shortcomings and has already begun to address them through deregulation and structural reform. But to see the outcome of these new policies, Rouhani needs another four years to prove that his approach toward foreign policy and the economy will result in major boosts in investment and job creation. Whether that will occur remains to be seen.