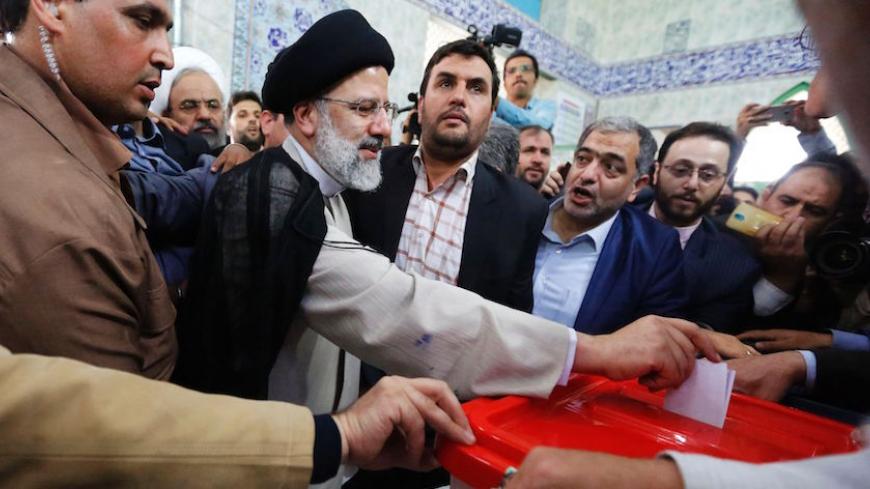 Iranian presidential candidate Ebrahim Raisi casts his ballot for the presidential elections at a polling station in southern Tehran on May 19, 2017. - GETTY/Atta Kenare

A majority of Iranians voted May 19 to give moderate incumbent President Hassan Rouhani a second term, but conservatives appear unwilling to accept the results of the balloting. Conservatives have been protesting the election process since the first hours of election day and are now accusing the Rouhani administration of violating the law. Such is not unprecedented.

In 2016, prominent Iranian conservative Gholam-Ali Haddad Adel claimed that the government had violated the law during parliamentary elections, but without documentation to substantiate his claim. That election saw moderates and Reformists voted into parliament in large numbers.

In remarks published May 22 on the Telegram channel of the hard-line Raja News, Ebrahim Raisi, the leading conservative candidate in the election, asserted that the alleged violations were not of a limited scope and that he is pursuing the matter through the Guardian Council.

Moreover, Ali Nikzad, head of Raisi’s campaign, said that same day, “Seyyed Ebrahim is like a mother who left his baby to prevent him from being hurt, and the baby fell [into the hands] of the stepmother.” In other words, Nikzad is alleging voting fraud, but for the sake of Iran’s national security Raisi has not publicly announced anything — and that is why Rouhani is now president.

Raisi wrote a letter dated May 21 to Ayatollah Ahmad Jannati, the conservative chairman of the Guardian Council — the body tasked with vetting candidates and probing objections to voting results. In the letter, Raisi asked Jannati to look into violations of the law before and during the elections. He also attached 100 pages of documentation to supposedly substantiate his allegations.

On the same day, in an interview with the state-run Arabic news channel Al-Alam, Guardian Council spokesman Abbas-Ali Kadkhodaie rejected the notion that there had been major violations during the voting process, stating, “Though there were minor violations, fortunately the violations weren’t so important that they would compel us to stop the election process.” Moreover, in a short message published May 22 on his Telegram channel, Kadkhodaie advised Raisi and his supporters to accept the results of the elections.

The conservatives and their backers believe that the documentation assembled by Raisi may lead to the invalidation of 3 million votes for Rouhani. The incumbent received 23.5 million of the 41 million ballots cast. So far, the Guardian Council has not shown any signs that it sees any validity in Raisi’s claims. The council will announce the results of its review of the alleged violations on May 30.

It thus seems as if the conservatives’ strategy is to discredit Rouhani’s victory while suggesting to their supporters and the general public that Raisi was defeated under unfair circumstances. In this vein, Hossein Shariatmadari — editor of the hard-line daily Kayhan — claimed May 21 that Raisi’s votes could have been twice that of Rouhani had it not been for “violations of the law” by the Rouhani-controlled Interior Ministry, which oversees elections.

Moreover, conservative activist Hamid-Reza Taraghi accused the Interior Ministry of not cooperating with Raisi’s campaign to address the latter’s objections, adding that the public is doubtful about the results of the May 19 presidential vote.