DC think tank accused of bending over backwards for Erdogan 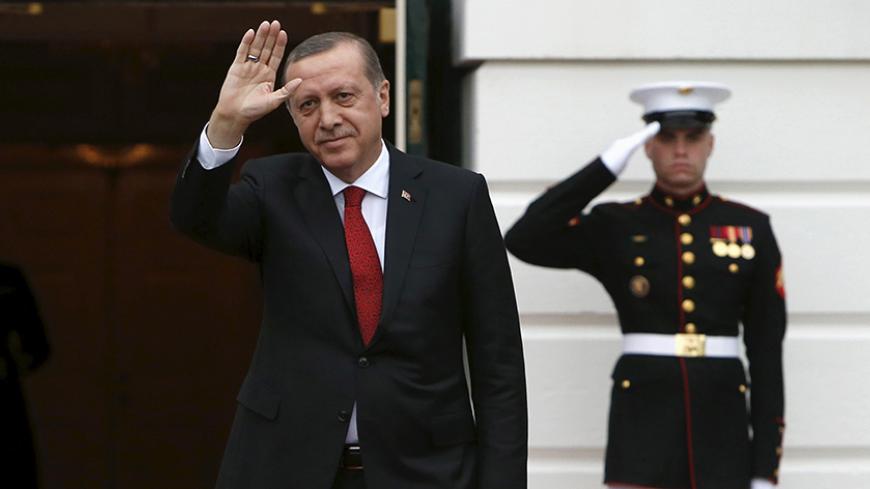 Turkish President Recep Tayyip Erdogan arrives for a working dinner with heads of delegations for the Nuclear Security Summit at the White House in Washington, March 31, 2016. - REUTERS/Jonathan Ernst

The last time Turkish President Recep Tayyip Erdogan came to Washington was in March last year to attend the Nuclear Security Summit, and things went horribly wrong. Erdogan delivered a speech at the Brookings Institution. What most people remember is not what he said there but what happened outside the think tank’s Massachusetts Avenue premises. News that Erdogan’s notoriously thuggish security detail set upon protesters and reporters, physically assaulting and hurling insults at them, made international headlines.

It has therefore been a matter of intense speculation whether any think tank would dare to invite Erdogan during his brief stint in the capital to meet with President Donald Trump today. Turkish think tank SETA and the Atlantic Council have stepped up to the plate. Erdogan will speak at a closed session co-hosted by them at the Turkish ambassador’s residence after his noon encounter with Trump, and tongues are wagging.

It’s hardly unusual that SETA would make room for the Turkish leader. The outfit has been long mentored by Erdogan’s Justice and Development Party (AKP) and before the government’s recent free fall into authoritarianism, SETA was well-respected for its high quality if occasionally ideologically tinged output.

The Atlantic Council’s alleged cozying up to the Erdogan regime is another matter. The incestuous relations between some Washington think tanks and foreign governments that are said to be greased by plenty of dollars is well-covered ground. Still, allegations that the Atlantic Council had bowed to Turkish pressure and excluded speakers, including a member of its own staff, at its yearly energy summit held in Istanbul in April have left some think tankers clutching their stomachs.

Turkish government-linked and pro-government conglomerates were among sponsors of the summit, themed “Strengthening Transatlantic Engagement with a Turbulent Region.” They included the state-owned Halkbank, whose deputy general manager is sitting in a New York jail over his alleged connections to money laundering for Iran, and construction giants Limak, Calik and MNG holding. Erdogan was the star draw of the event.

In separate conversations with Al-Monitor, four sources with intimate knowledge of the summit’s arrangements asserted that the claims of Turkish government meddling were true. On condition of anonymity, they said the alleged targets of Turkish objections were both Turks — and women.

One was the highly respected Turkish journalist Asli Aydintasbas, who writes for the opposition daily Cumhuriyet and is a senior fellow at the European Council on Foreign Relations. The other was the Atlantic Council’s own Naz Durakoglu, a former State Department staffer under the Obama administration.

A draft program of the summit seen by Al-Monitor billed Aydintasbas as a speaker at a luncheon titled “Regional Security Outlook.” She was to be joined, among others, by former US national security adviser James L. Jones and Stephen J. Hadley, who held the same position under President George W. Bush.

All of the sources claimed that Aydintasbas was taken off the panel after the office of presidential spokesman Ibrahim Kalin vetoed her presence, intervening directly. Kalin was apparently slated to speak at the same session, though his name doesn’t appear in the draft program. Aydintasbas was put on a different panel.

A separate source disputed this version of events, saying, "A low-level Turkish official expressed displeasure with a couple names," but that the Atlantic Council had not removed any speakers from the summit.

A similar fate befell Durakoglu, who is widely lauded as a cool-headed and fair judge of Turkish affairs and currently a senior fellow and strategist at the Atlantic Council’s Digital Forensic Lab. She apparently drew the Turkish government’s wrath because of her mildly critical remarks during an April 5 House Foreign Affairs Committee hearing on Turkey’s withering democracy.

Durakoglu was supposed to address a strategy roundtable discussion on Turkey and the West with Hadley, Jones and Peter Westmacott, a former British ambassador to the United States and Turkey. She was removed from the panel. Neither of them was reportedly given convincing explanations as to why they had been reshuffled. Aydintasbas is believed to have been “offered the opportunity” to take part in an afternoon session with no format or featured speakers. She wasn’t spotted there.

The women were subsequently asked to participate in an Atlantic Council teleconference call about the Trump-Erdogan meeting. Durakoglu accepted. Aydintasbas declined.

Several sources told Al-Monitor that Berat Albayrak, the Turkish energy minister and Erdogan’s son-in-law, had also aired his views about the speakers shortly before the summit. Several attendees who spoke to Al-Monitor on condition that they not be identified claimed there was no discussion throughout the summit about Turkey's unchecked descent into one-man rule.

Apparently unruffled by the alleged pressure, the Atlantic Council leadership is enthusiastically pursuing its relations with the Turkish government and reportedly drew up a detailed memo for Erdogan offering advice on how to handle his meeting with Trump. The broader objective is supposedly to develop a track-two effort between the United States and Turkey.

In an emailed statement responding to Al-Monitor's request for comment and in a separate telephone conversation, Atlantic Council President and CEO Fred Kempe categorically denied all the allegations of censorship. Kempe said, "It is untrue that the Atlantic Council removed any speakers from participation in any of the Summit's sessions at the request of the Turkish government. The Atlantic Council did not list speakers in the agenda for the off-the-record Summit sessions, but the two individuals you mentioned were invited to speak at those sessions.”