Congress raises specter of rupture with Turkey if referendum passes

A House panel slammed Ankara's authoritarian drift ahead of the April 16 vote. 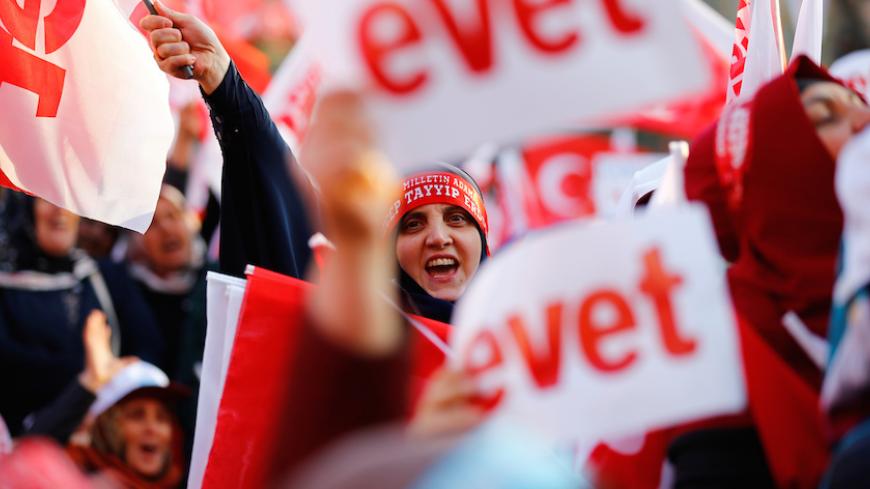 Members of the House Foreign Affairs panel on Eurasian affairs took turns at an April 5 hearing denouncing the crackdown on dissidents and journalists since last summer's failed coup. They predicted that Turkey's democracy — and by extension its relationship with the United States — will further erode if voters choose "yes" on the April 16 referendum.

"We are on the side of the people of Turkey," said panel Chairman Dana Rohrabacher, R-Calif. "Please, I hope that they hear our plea: Remain our friend. Don't go to the polls and basically join in this negation of friendship that has lasted so long and done so much good to the people of the United States and the people of Turkey."

While other lawmakers weren't as blunt as their chairman, many of them shared similar sentiments.

"We all feel that way," Rep. Bill Keating, D-Mass., told Al-Monitor. "We don't tell countries how to vote. But clearly we believe in checks and balances. So that's where we're coming from."

Others have already all but given up on Erdogan.

"I think the relation's going to be really bad either way," said Rep. Albio Sires, D-NJ. "Anybody that confiscates 600 businesses worth $10 billion, anybody that puts in jail one-third of imprisoned journalists — that's not going in a good direction."

The gloomy assessments followed a hearing during which lawmakers heard from an array of Turkey critics. These included an opposition party official who told them that Erdogan was conducting "slow-motion genocide" against the country's Kurdish minority.

"My people in Turkey are going through a full-scale assault, which could be viewed as a form of genocide," said Mehmet Yuksel, the representative of the Peoples' Democratic Party (HDP) in Washington. "The Turkish authorities have seen the Kurdish identity as the main enemy."

The HDP has increasingly been in Ankara's crosshairs as it has taken the lead in campaigning against the referendum, which would replace the parliamentary system dating back to the Turkish republic's founding in 1923 with a presidential structure. The changes would notably eliminate the position of prime minister and allow the president to rule by decree, appoint high officials and judges and dissolve parliament.

The HDP's two co-leaders, Selahattin Demirtas and Figen Yuksekdag, were arrested late last year along with nine other HDP members of parliament amid allegations that the party is close to the outlawed Kurdistan Workers Party (PKK), which Ankara deems a terrorist group. The HDP denies any such links.

And just this week a Turkish court banned the party's "Say No" anti-referendum song from playing on the airways because it allegedly incites "hatred and hostility among people."

David Phillips of Columbia University's Institute for the Study of Human Rights outlined reports of Ankara's military and financial support for the Islamic State (IS), including the purchase of IS oil in Syria. And Naz Durakoglu, a former Keating aide now with the Atlantic Council, also bemoaned the erosion of freedom in Turkey while urging lawmakers to do what they could to strengthen the strategic relationship with its NATO ally.

He said Turkey was dealing with both the aftermath of the coup that Ankara blames on US-based cleric Fethullah Gulen as well as IS and Kurdish terrorism. He said journalists had been detained because of their ties to terrorists and coup plotters and accused HDP members of attending meetings with the PKK.

"Can you imagine a congressman attending an [IS] leaders' event and promoting a terrorist organization?" Cinar said. "This is a big problem for Turkey. It's a national security risk."