The Egyptian government and different parties in the Sinai Peninsula turned a deaf ear to the Save Sinai initiative, a proposal launched by Gamaa Islamiya aimed at halting violence in the region. 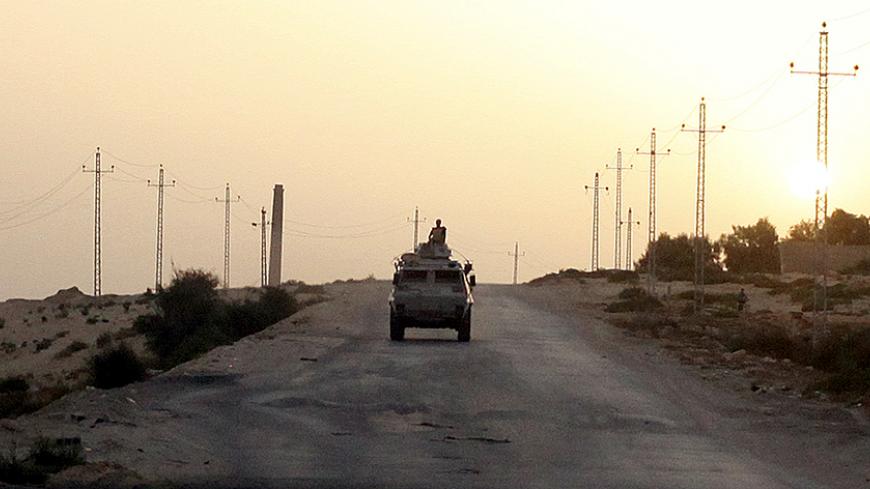 An Egyptian military vehicle is seen on the highway in northern Sinai, Egypt, May 25, 2015. - REUTERS/Asmaa Waguih

CAIRO — The Building and Development Party, the political wing of Gamaa Islamiya, launched the Save Sinai Initiative on April 22. The initiative was designed to halt violence in the Sinai Peninsula and was announced just before Sinai Liberation Day, which is celebrated every year on April 25.

According to the party’s April 22 statement, the initiative consists of four phases: avoid any further deterioration, contain the crisis and create the right atmosphere for the resolution; embark on talks to identify problems; develop a comprehensive plan establishing a timeline for implementing solutions; and implement this plan via national reconciliation.

Since President Mohammed Morsi was ousted in mid-2013 and Ansar Bayt al-Maqdis pledged allegiance to the Islamic State (IS) in November 2014, violence has been on the rise across Sinai. Attacks targeting the Egyptian army, police and civilians have further increased; most recently, on April 19, gunmen attacked a security checkpoint near the Monastery of St. Catherine in South Sinai.

The Save Sinai Initiative called on armed groups in Sinai to halt attacks as of April 25, and the Egyptian government was asked to stop raids on the same day, to pave the way for a national conference involving all tribes and influential parties in Sinai and initiate an open dialogue.

While media reports have criticized the initiative, the Egyptian government has not made any comments, and days have passed without the cease-fire being announced. Masrawy news portal reported May 1 that pro-IS members of Ansar Bayt al-Maqdis had killed a woman in a village near Rafah city; she had been kidnapped along with her husband and three children under the pretext that the family cooperated with the security services.

Islamist author Najeh Ibrahim told Al-Monitor by phone, “For the initiative to be a success, the party behind it needs to have good relations with the government and good contacts with IS, in order to manage to persuade both parties to agree on the initiative or at least to halt violence.”

The London-based Al-Hayat newspaper reported March 11 that Egypt’s Interior Ministry accused leaders of Gamaa Islamiya of having resumed armed activities and planning to carry out terrorist attacks against security forces.

Ibrahim said, “The initiative was launched at a time when the Egyptian government is facing hardship following IS' painful twin attacks on the churches in Tanta and Alexandria. In addition, the government will not accept to equate the state with IS.”

On March 9, IS claimed responsibility for the two bombings at the churches, which killed 45 people and wounded dozens.

Speaking to Al-Monitor by phone, Ahmad Ban, an expert on Islamist affairs, said, "The initiative is a pointer that the Building and Development Party is unrealistic and cannot make a difference between a political and a terrorist entity. It is an attempt to legitimize criminal entities that target the Egyptian people and army. Talks cannot be held with IS or Ansar Bayt al-Maqdis.” Ban criticized the timing of the initiative, which followed the blasts at the churches last month.

He added, “The official parties have not responded to the initiative; they have not rejected or condemned it, or made reservations in this regard. The state cannot agree on such an initiative as long as the confrontation is ongoing with armed militants in Sinai.”

Member of parliament Anissa Hassouna noted that the initiative had a “suspicious” timing, saying in an April 23 statement, “The only acceptable initiative should include the one and only condition requiring that all terrorists in Sinai surrender and hand over all of their weapons to the state. This is because the Egyptian state is not negotiating with terrorists who have killed and bombed Egyptians over the past three years.”

Khaled Okasha, the director of the National Center for Security Studies, believes the initiative is designed to ignite media controversy and holds no importance. He told Al-Monitor, “Gamaa Islamiya is trying to market itself, although its initiative is impossible. The initiative is only limited to the party that created it, and for this reason it was disregarded by all [other] parties, including IS. The deadline to cease terrorist attacks has passed, without [IS] giving [the initiative] attention.”

Gamaa Islamiya claimed responsibility for terrorist attacks in the 1980s and 1990s, assassinated Egyptian President Anwar Sadat on Oct. 6, 1981, at a military parade and was behind plots to assassinate former President Hosni Mubarak. Yet it retracted its plan. In a July 2012 interview published by Al-Ahram newspaper, former Gamaa Islamiya Emir Karam Zuhdi said that the assassination of Sadat was “a big mistake."

In 1998, while imprisoned for assassinating Sadat, leaders of Gamaa Islamiya launched an initiative to stop the violence. The initiative required a review of their doctrine, which they conducted while in prison. It resulted in renouncing violence and use of arms that halted terrorist attacks. Ibrahim said that those who were renouncing violence were released, and that the initiative was officially announced to the public in 2001. He took part in the review while in prison with Gamaa Islamiya leaders following Sadat's assassination, and was released in November 2005 after he defected from Gamaa Islamiya.

Ibrahim differentiated between Gamaa Islamiya’s doctrinal reviews in the 1990s and the present one. He said, “Gamaa Islamiya’s initiative with the state in the 1990s was a success because it was confidential, personal and was only announced after it was proven successful. The supporters of Gamaa Islamiya were genuinely willing to renounce violence. Yet the elements of success are missing from the current initiative, because IS' high level of extremism is difficult to give up all of a sudden. Also, [IS'] discourse is negative; it is unwilling to reach an agreement with the state and its fight in Sinai has no [specific] goal.”

According to Ibrahim, halting violence in Sinai requires “creative ideas combining political, intelligence and military action.” He pointed out that the armed confrontation between the state and terrorists would continue for a while, which would postpone steps toward development there.