The general US reactions to Turkish airstrikes in Syria have been loud, but the White House has yet to utter a single rebuke as Turkey's president packs for Washington. 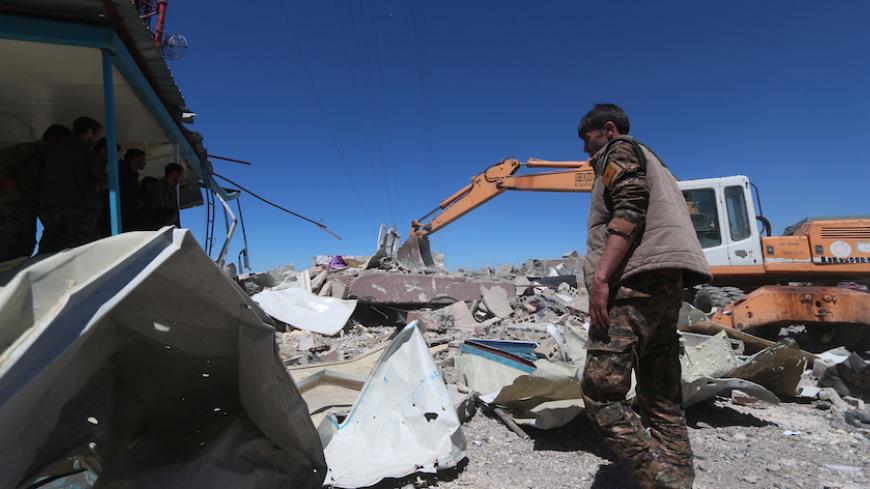 Members of the Kurdish People's Protection Units inspect the damage at their headquarters after it was hit by Turkish airstrikes in Mount Karachok near Malikiya, Syria, April 25, 2017. - REUTERS/ Rodi Said

With just over two weeks before Turkish President Recep Tayyip Erdogan’s long-sought meeting with US President Donald Trump in Washington, why did Turkey bomb and kill the United States' top allies in the fight against the Islamic State in Syria? The timing of the attack on April 25 has left many pundits scratching their heads. Turkish artillery strikes against the Syrian Kurdish People's Protection Units (YPG) in an area stretching from Kobani to Serekaniye were reportedly continuing today. YPG sources contacted in northern Syria said the attacks had expanded to include the town of Tell Abyad, which Turkey and its Free Syrian Army rebel allies have been eyeing for some time.

In a breaking development, the Turkish General Staff announced that there had been 13 separate attacks on 11 Turkish border posts from YPG-controlled areas.

Turkey’s formal justification for the wave of airstrikes against the Syrian Kurdish group that left 25 militants dead and 30 others wounded goes something like this: The YPG is no different from the Kurdistan Workers Party (PKK). Both pledge allegiance to imprisoned PKK leader Abdullah Ocalan. So let’s cut the crap about them being different.

Since 1984, the PKK has been prosecuting a bloody campaign inside Turkey, initially for Kurdish independence and now for self-rule, and is considered a terrorist group by Ankara and Washington alike. The PKK’s Syrian iteration, the YPG, are by extension also terrorists. And thanks to US air support, they now control nearly two-thirds of Syria’s border with Turkey, and pose a huge threat to Turkey's security.

Turkey has been making these arguments for a long time, in turn bullying and pleading, with the United States to axe its partnership with the Syrian Kurds and to team up with Turkey and its Syrian Arab allies instead. But the Arab rebels are bitterly divided, poorly motivated and display jihadist proclivities, all of which has propelled the United States to stick with the Syrian Kurds and their Arab allies. None of this is likely to change in the immediate future, so why risk souring the rendezvous with Trump by taking actions that imperil the fight against IS on the eve of the final push against its so-called capital Raqqa?

To be sure, the US reaction to the Turkish airstrikes has been uncharacteristically loud. The US Central Command has led the chorus of protests with assorted statements and tweets in support for the YPG. “Our partner forces have been killed by #Turkey strike, they have made many sacrifices to defeat #ISIS,” a Centcom spokesman tweeted. The State Department grumbled that the strikes had not been coordinated.

But the White House has yet to utter a single rebuke. Trump has already drawn sharp criticism for his hasty congratulatory phone call to Erdogan over his scandal-tainted referendum win, and Erdogan’s unremittingly undemocratic behavior was rewarded with an invitation to meet with Trump May 16.

A stiff reaction to the Turkish strikes would have allowed Trump to fend off such critiques, especially amid intense media scrutiny of his business ties with Turkey and the shadowy lobbying activities of Michael Flynn, his disgraced former national security adviser, on behalf of the Turkish government.

Turkish pundits have varying explanations for Erdogan and Trump’s behavior. One is that Trump and his intensely Iran-phobic inner circle see Turkey as a valuable ally against Iran’s theocrats.

Asli Aydintasbas, a prominent Turkish columnist for Cumhuriyet, is among those espousing this view. “There is a group around Trump within the White House that wants to maintain good relations with Erdogan,” she wrote today. “They see Turkey as a counterweight against Iran.” In an effort to capitalize on pro-Israel and anti-Iran feelings in the White House, Erdogan has become increasingly vocal against Iran and conspicuously less hostile toward Israel. Turkish Energy Minister Berat Albayrak, Erdogan’s son-in-law who is widely viewed as a shadow prime minister, is said to be exploring a possible visit to Israel before May 16 to sweeten Erdogan’s meeting with Trump.

Another explanation for the airstrikes is that Erdogan is seeking to deflect attention from the allegations of massive fraud still swirling around the referendum. Veteran journalist Umit Kivanc argued in his column for the independent online news portal Duvar, “It would not be a bad thing if we realized that we are dealing with a leader who is a master of amassing power and staying in power. The formula for remaining in power can be nothing but war at this stage.”

Still others believe that Turkey’s moves against the YPG are calculated to draw the YPG into a fight and to drive a wedge between the United States and the Syrian Kurds, and to some extent they have. Syrian Kurdish officials say they expect more than verbal condemnations. They want a no-fly zone over the areas under their control. Unless the United States takes firm steps to prevent further Turkish aggression, they may even withdraw from the Raqqa campaign.

Nothing would please Turkey better.

And despite all the turbulence, the United States is unlikely to resort to such measures against a fellow NATO member and Erdogan knows this. Thus, according to a Turkish official who spoke to Al-Monitor on condition of anonymity, “It made more sense to do this before the visit than after, when we will be turning a new page.”

As for Trump, even the sharpest US pundits are hard pressed to decipher his true reasoning. And where Turkey fits into it, if at all, is anybody’s guess.