All eyes on Pompeo as CIA chief arrives in Ankara

Though Turkish hopes for a closer US alliance are soaring as CIA Director Mike Pompeo meets with top Ankara officials, it's unlikely that the US administration will agree to weaken its ties to the Kurdish groups it depends on badly in Syria. 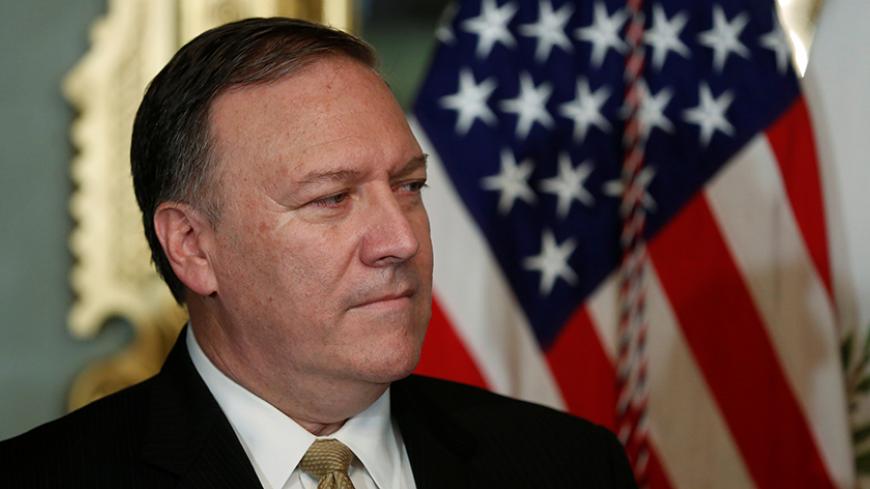 Mike Pompeo waits to be sworn in as director of the Central Intelligence Agency in US Vice President Mike Pence's ceremonial office in the Eisenhower Executive Office Building at the White House in Washington, Jan. 23, 2017. - REUTERS/Jonathan Ernst

CIA Director Mike Pompeo arrived in Turkey today for a working visit hailed in the Turkish media as a new page in the country’s acrimonious relations with the United States.

The exuberant tone of the press reflects Turkey’s hopes that Trump will respond positively to its demands to dump the Syrian Kurdish People’s Protection Units (YPG) as its premier partner in the fight against IS in Syria and to extradite Fethullah Gulen, the Pennsylvania-based Turkish imam who is seen as the mastermind of the failed July 15 coup.

Those issues were expected to come up during Pompeo’s talks with his Turkish counterpart Hakan Fidan, who alongside presidential spokesman Ibrahim Kalin remains among Washington’s top interlocutors in Ankara. Turkish Foreign Ministry Undersecretary Umit Yalcin is due to arrive in Washington next week to follow up on all of them in meetings with top US officials including national security adviser Mike Flynn.

Salvaging the relationship will be no easy feat. James F. Jeffrey, a former US ambassador to Turkey and a senior fellow at the Washington Institute for Near East Policy, told Al-Monitor, "By body language and the ‘anybody but Obama’ factor Presidents Trump and Erdogan could hit it off personally.” Yet real progress can only come, Jeffrey added, “from accommodating each other’s core regional interests; for Trump, destroying IS and containing Iran; for Erdogan, more US action against Gulen and more care dealing with the YPG.”

Turkey will likely press its case against the YPG with evidence of the group’s links to the Kurdistan Workers Party (PKK), which is fighting for Kurdish autonomy inside Turkey. The PKK, classified as a terror group by the State Department, has carried its battle to urban centers, killing scores of policemen and civilians. Turkey has responded by leveling entire neighborhoods in the mainly Kurdish southeast and killing civilians as well, rights groups allege. In a bid to capitalize on Trump’s hard line on Iran, Ankara is also likely to repeat allegations of collusion between the PKK, the YPG and the Iranian regime.

Having already invested so much in the Syrian Kurds, it is unlikely the Pentagon would scrap its alliance with them, particularly in the midst of ongoing efforts to capture Raqqa. The logistical infrastructure for the Raqqa offensive is located in the Kurdish-controlled areas, where the coalition has four forward operating bases — three in the Hasakah region and one in Kobani — and is said to be planning to add more. But the Incirlik Air Base in Turkey remains key to the operation and Turkey has threatened to rescind coalition access to it should the Pentagon implement plans to provide heavy weapons to the YPG and its Arab partners.

The complexities of coordinating allied and mutually hostile forces in the battle against IS were highlighted once again when a Russian warplane accidentally killed three Turkish soldiers in al-Bab. Russian President Vladimir Putin called Erdogan to convey his regrets.

Turkey and its FSA proxies are advancing on the city from the north and east while Syrian regime forces and their Hezbollah allies are closing in from the south and west. Russia has been coordinating on behalf of Turkey and the regime to keep their forces apart. The New York Times, quoting unnamed pro-regime sources, reported Feb. 9, "Russia and Turkey have agreed that the pro-government forces, not the rebels, will enter the city."

But there are unconfirmed reports that FSA forces are clashing with regime forces near the village of Abu Zandin on the road to al-Bab. Should they prove true, Turkey’s ability to rein in its proxies will fall into further doubt.

Meanwhile, a senior YPG official contacted in northern Syria via WhatsApp speculated that the Russian strike on the Turkish soldiers was no accident. “Coinciding with Pompeo’s visit to Ankara, the message to Turkey is clear: that if they cook up fresh plans with America for supporting the rebels against Assad, they will face tough consequences.”