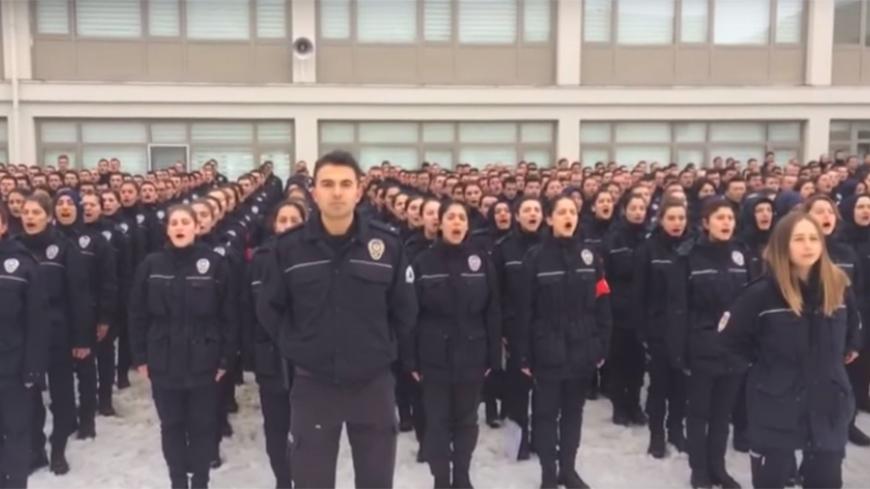 Newly graduated members of the Turkish police force recite an oath during their graduation ceremony in Yozgat, Turkey, in a still from a video uploaded March 24, 2017. - YouTube/eray doğtaş

The shock of the July 15 abortive coup followed by instant imposed reforms and mass purges have drawn Turkey’s security sector — made up of a large military, the National Intelligence Service (MIT), the national police, the gendarmerie command and private security firms — into a structural transformation process. Given Turkey’s undeniable secular-conservative divide, it is not hard to see that the state’s armed security actors are becoming the main instruments of political controversy in the country.

Islamic and ultra-nationalist sources of guidance, particularly in the police force, raise the question of the professionalism of armed security forces that adopt active positions in the debate on Islamophobia and Islamic fascism.

The Turkish National Police Force, which recently celebrated its 172nd anniversary, commands 275,000 personnel. On March 19, about 10,000 police cadets graduated from police vocational schools in 15 provinces after four-month accelerated trainings. Purges against Gulenists had begun long before the coup attempt, and to fill the gap, police began the accelerated trainings.

Photo coverage of the oath-taking ceremony in the central Anatolian city of Yozgat of 1,100 police conscripts triggered acrimonious debate in the country.

About 300 cadets, all females, took an oath that pledged their allegiance to God, to prophets, to the flag and weapons, and that called on martyrs to rest in peace and vowed revenge for their deaths. What attracted notice was that none of the women graduates wore the newly permitted headscarves.

What made this oath popular after the July 15 coup attempt was the abundant use of religious and ultra-nationalist references and the open avowal of revenge that in a way seemed to place the role of judge and executioner in the hands of new security forces. Nobody reminded these fresh graduates that their supreme duty is not to take revenge but to apprehend criminals and suspects to deliver them to the judiciary. But somebody was careful enough to make sure that the ceremony ended with official version of the oath that vows to serve the Turkish nation and the state impartially and with respect to human rights.

Anyone objecting to religious and ultra-nationalist references in the ceremonies was accused of Islamophobia, while critical media chose to report these events as “footsteps of Islamic fascism.”

One fervent critical writer warned, “Islamic fascism is becoming the official ideology of the state.”

That the state security sector has become the main arena of vigorous debate between the secular and conservative camps indicates that Turkey hasn’t paid much attention to lessons learned from the July 15 coup attempt.

The politicization of the security sector down to its lowest ranks means meddling and taking sides in the political debate, which could have lethal implications, particularly for civilian-military relations.

We should recall how on Dec. 19 in Ankara, a young 2½-year veteran of the police force, Mevlut Mert Altintas, assassinated Russian Ambassador Andrey Karlov.

We still don’t know for sure what motivated Altintas to assassinate Karlov and who might have incited him. Whether he was spurred by the Gulen movement or a network affiliated with al-Qaeda or Jabhat al-Nusra, the reality is that he had to be mentally primed for such an action and that rituals such as these revenge oaths in police uniforms were probably the first steps in his radicalization.