A recent controversy over who should lead prayers at mosques and prayer halls in military facilities shows the Turkish military is still a long way from striking a true balance between religious freedom and freedom from religion. 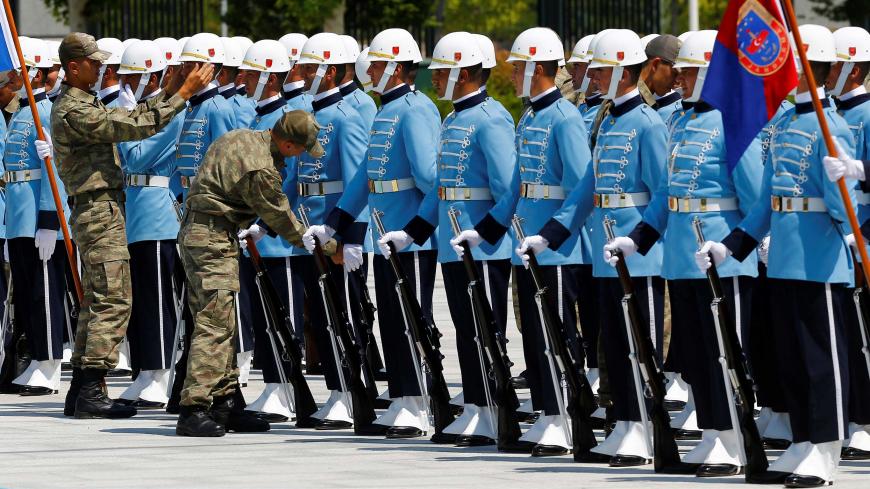 Turkish soldiers help guards of honour to be ready for a welcoming ceremony at the Presidential Palace in Ankara, Turkey, Aug. 5, 2016. - REUTERS/Umit Bektas

Turkey's armed forces — known as the ultimate guardian of secularism since the foundation of the modern Turkish republic almost a century ago — are now trying to strike a balance between religious freedom and freedom from religion.

During an Aug. 20 TV program, a well-known Turkish politician raised claims that cadets at the war academy in Ankara had sparred over who should lead Friday prayers at the school mosque. Umit Ozdag, deputy chair of the nationalist Good Party, said he planned to follow up by submitting a question to parliament on the issue of some cadets wanting an imam of a religious order to lead Friday prayers instead of the assigned conscript imam.

“Did the issue reach the General Staff and then [President] Recep Tayyip Erdogan? What decisions were made?” Ozdag queried.

The following day, the Ministry of National Defense issued a harshly worded denial of Ozdag’s claims. Yet the debate on how the Turkish Armed Forces (TSK) will preserve its traditional secular character while allowing for more religious freedom is far from over. Some of the most pertinent questions pertain to who should serve as imams at mosques at TSK facilities and who will lead the prayers, especially the Friday congregational prayer.

The TSK is known for its hard-line secularist character. For decades, it adhered strictly to the principle that the army should be kept off limits to political Islam and military units should be free of religious disputes. Conscripts doing their compulsory military service served as imams and muezzins (those who lead the calls to prayer) in mosques across TSK facilities. Also, military units, no matter how big and crowded they are, have traditionally had a single mosque or a prayer room to facilitate supervision.

The practice of having professional officers serving as imams was abandoned after the 1980 coup. In 1997-1998, the top brass led a harsh secularist campaign to force the resignation of the premier — who was the leader of an Islamist party — and purged officers who taught religion courses at military schools and were graduates of theology faculties.

After the 2016 failed coup, however, war academies were placed under the newly founded University of National Defense, dominated by administrators appointed by the Justice and Development Party government. As a result, mosques and prayer rooms in their facilities became the subject of rivalries.

Since the 2016 coup attempt, the number of practicing Muslims among newly admitted cadets has grown. The issue came to public attention last year amid complaints that the single mosque at the Army War Academy — an almost 3,000-person-strong institution sprawling over a vast area — had become insufficient, especially on Fridays, and that cadets lost a lot of time walking to the mosque for prayers. Proposals have been made to open prayer rooms at each battalion, in addition to the main mosque.

Asked about the proposals, a military official raised questions about how far such demands might go and their potential impact on military discipline. Speaking on condition of anonymity, the official told Al-Monitor, “Let’s suppose that a prayer room is allowed at each battalion building, where approximately 300 cadets receive training. Will the students then ask for prayer rooms in other areas such as dormitories, cafes and training grounds? This would require dozens of prayer rooms across the Army War Academy. How many prayer rooms will be enough to keep the sensitive balance between the school’s working discipline and the worship needs of cadets who are practicing Muslims? Moreover, those prayer rooms would require constant control to prevent them from being used for political purposes.

According to the official, striking a balance became more difficult in the climate after the 2016 coup attempt. “On one hand, the number of students who are practicing Muslims has increased [since the coup attempt], and school administrations need to make sure that hundreds of students can worship freely and with the least possible trouble. On the other hand, however, the TSK needs to preserve its secular character, keep political Islam at bay and make sure that mosques at military units do not fall under the control of religious orders. Since [the coup attempt], maintaining this sensitive balance has become more difficult,” he said.

In early August, the pro-government Islamist daily Yeni Akit ran an article titled “Battalion imams are a must for the TSK,” which argued for chaplain officers who would offer religious guidance to military personnel, pointing to the example of Western armies that employ civilian and military chaplains. In short, the article called for reinstating the old “chaplain officer” and “battalion imam” positions and thus for imam officers to serve at TSK mosques. A retired colonel quoted in the article said it was high time for the TSK to have chaplain officers to guide and meet the religious needs of military personnel.

Despite a relative relaxation over the past decade, the military’s hard-line secularist stance has always caused resentment among Turks. Until 10 years ago, mothers wearing headscarves would often be barred from the oath-taking ceremonies of their sons or wedding parties taking place in officers’ clubs. Turks were also accustomed to stories of officers being denied promotion or sent off to remote regions just for being practicing Muslims. The conservative majority now believes that since the 2016 coup attempt, the TSK has begun to shrug off some of its secularist baggage, a process the political elites should support.

In secular quarters, however, the Islamization of the army is a highly critical matter. They see the TSK’s perception of secularism and its relation to Islam not merely as a military issue but also as a sociocultural one that defines society. Hence, secular Turks worry that if the TSK abandons its traditional perception of secularism, the nation will follow.

The best example in the Muslim world is perhaps the transformation of the Pakistani military under Muhammad Zia-ul-Haq, who served as president from 1978 to 1988. The rise of piety in the Pakistani army and the subsequent politicization of religious influences is a well-known process that led to various problems and the erosion of that army’s professional and military ethics norms.

Turkey's civilian and military elites need to determine whether a civilian-military gap should persist between how society and the military perceive secularism. Should the military’s perception of secularism be sterner than that of society, or should the military be a direct mirror of the nation? For instance, will Turkish society be more peaceful and feel more secure if the rate of Friday prayer attendance or Ramadan fasting at military barracks is equal to the nation’s overall rate, or lower than it?

In sum, the fundamental questions are: How much should the TSK free itself from religion, and how much freedom of religion should it allow within its ranks? Should the decision be up to civilian or military leaders? In other words, is this a political or technical/bureaucratic question? Who is going to set the standards and disciplinary mechanisms to make sure the issue is addressed in a uniform fashion at the more than 200 military units and barracks across Turkey? Turkey is still vague on those critical issues.