Israeli politicians concentrated on The New York Times and the op-ed published by Fatah senior Marwan Barghouti, instead of focusing on Barghouti’s accusations against Israel. 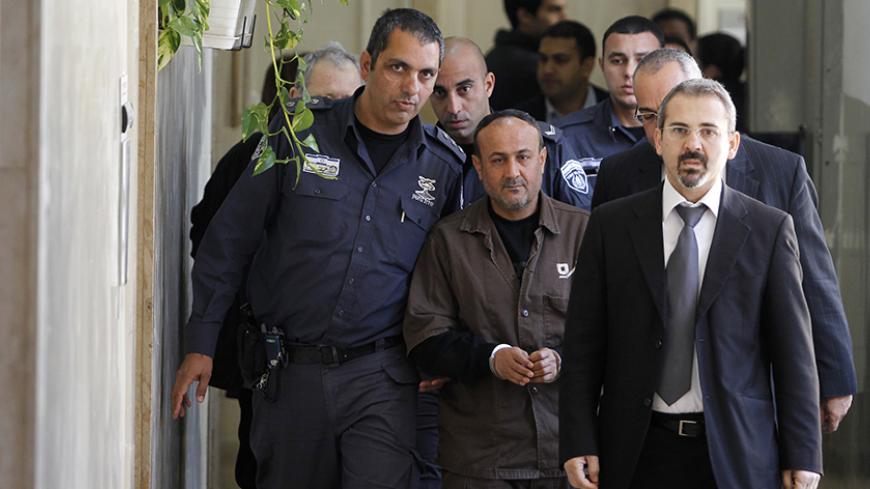 The New York Times published on April 17 a clarification to an editorial remark that appeared beneath an opinion piece written on April 16 by senior Fatah leader Marwan Barghouti. The original remark referred to the author as "Palestinian leader" and "parliamentarian." But the real importance of the clarification is that it shifted the debate over the Palestinian detainees' hunger strike back to concrete spheres.

Barghouti, currently imprisoned in Israel, wrote an editorial under the headline, "Why We Are on Hunger Strike in Israel's Prisons." The aforementioned note about Barghouti beneath the article fails to list the crimes for which he was convicted in 2004, including several terrorist attacks, which led to the deaths of five Israelis.

The paper came under harsh criticism in Israel for acting prejudicially and intentionally hiding information and context. This was ultimately successful. An April 17 clarification states, "This article explained the writer’s prison sentence but neglected to provide sufficient context by stating the offenses of which he was convicted. They were five counts of murder and membership in a terrorist organization. Mr. Barghouti declined to offer a defense at his trial and refused to recognize the Israeli court’s jurisdiction and legitimacy."

The senior Fatah leader continued, "Having spent the last 15 years in an Israeli prison, I have been both a witness to and a victim of Israel’s illegal system of mass arbitrary arrests and ill-treatment of Palestinian prisoners. After exhausting all other options, I decided there was no choice but to resist these abuses by going on a hunger strike."

Yesh Atid Chair Yair Lapid was one of the first Israeli leaders to release a stinging attack on The New York Times for its original editorial note about Barghouti. In a counter-article published on the Times of Israel English-language website, he accused The New York Times of acting irresponsibly when it "didn’t even bother to explain to its readers that the author is a convicted murderer of the worst kind. … He was convicted in a civilian (not military) court on five separate counts of murder of innocent civilians. He was involved in dozens of attempted terror attacks. He caused people to lose their families and led to people being maimed. He destroyed lives."

In the past, Lapid's right-hand man in Yesh Atid, Knesset member Ofer Shelah, had actually focused considerably on the possibility that Barghouti might be released one day, and on his popularity among more moderate sectors of the Palestinian public. In 2002, as a journalist, he even expressed the fear that Barghouti's trial could be turned into a show trial, driven more by propaganda than facts.

Deputy Minister for Diplomacy Michael Oren of the Kulanu Party, a former Israeli ambassador to Washington, called the editorial "journalistic terrorism" and accused The New York Times of "intentional deception." In an interview with Army Radio on April 17, he said, "I have written for the American media for years. The average length of an editorial is 600-700 words. Marwan Barghouti's article is twice as long. Publishing it on a Jewish holiday [the seventh day of Passover] meant that the government of Israel was unable to respond. I think that this was done intentionally. The American Jewish leadership wasn’t able to respond either."

Joining the attacks was Israel's Ambassador to the United Nations Danny Danon of the Likud Party. He wrote on his Facebook page, "The New York Times forgot to mention that he [Barghouti] is a murderer who was sentenced to five life sentences and responsible for the murder of innocent Israelis. … Not only did the New York Times give a platform to a convicted murderer spreading baseless lies about Israel, The New York Times was also hiding the truth from its readers." Lapid, Oren and Danon all align with the right or center-right of the Israeli political spectrum. Their attacks on The New York Times serve their agendas.

Their claims were indeed justified, as evidenced by the clarification. Nevertheless, there must now be a serious debate in Israel about Barghouti's claims. For Barghouti, it was a winning move: He succeeded in pushing the issue of Palestinian detainees to the top of the international agenda and embarrassing Israel in the process. At the same time, he also cemented his position as a political leader among the Palestinian public.

Barghouti is a lot like Israeli politicians in that he has objectives and rivals. As someone who sees himself as the inevitable successor of Palestinian President Mahmoud Abbas, Barghouti is building up his image as leader of the Palestinian prisoners' struggle. Detainees' rights are a very sensitive issue in Palestinian society, and he has used it to score himself points. At the same time, the fact that he has since been moved to solitary confinement, coupled by calls in Israel to investigate the "fiasco" that led to his editorial being smuggled out of prison, will inevitably serve him well.

As far as The New York Times is concerned, publishing an editorial that Barghouti wrote in prison just moments before the launch of the hunger strike he initiated is an important journalist coup, reconfiguring the public agenda. But for Israel, the debate must now focus on the conditions faced by Palestinian detainees. Israel has numerous ways to repudiate the claims of this senior Fatah leader: It could release figures to counter these claims and present its own evidence through official channels. Politicians, especially leaders like Yesh Atid head Yair Lapid who see themselves as future candidates for prime minister, should expand the debate and relate to the actual issues at stake. Perhaps they might even present their own positions on resolving the Palestinian-Israeli conflict.

Obviously Barghouti is a terrorist (as he was convicted), who is justly serving a prison sentence for his crimes. Nevertheless, he is also a political leader and the most famous Palestinian prisoner today. For years, he maintained ties with Israeli politicians from the left. Two former defense ministers from the Labor Party have called for Barghouti's release. In a 2007 interview with Haaretz, late Minister Binyamin Ben-Eliezer called for Barghouti to be prepared to succeed Abbas as the next Palestinian leader, much like the dialogue that Israel had with late PLO leader Yasser Arafat years earlier. Former Minister Amir Peretz called for Barghouti's release on more than one occasion and even met with him in prison. Joining the calls of Ben-Eliezer and Peretz were former Meretz Ministers Haim Oron and Yossi Beilin.

Rather than forcing some easy, populist response or other, the editorial, the controversy over it and the Palestinian prisoners’ hunger strike would better serve Israel's leaders if they were used to instigate a broader, forward-looking discussion. Such a discussion should inevitably include Barghouti's potential role as a future Palestinian leader.