The political dispute between Hamas and the consensus government in Ramallah has affected many poor families in the Gaza Strip whose welfare payments have been cut off. 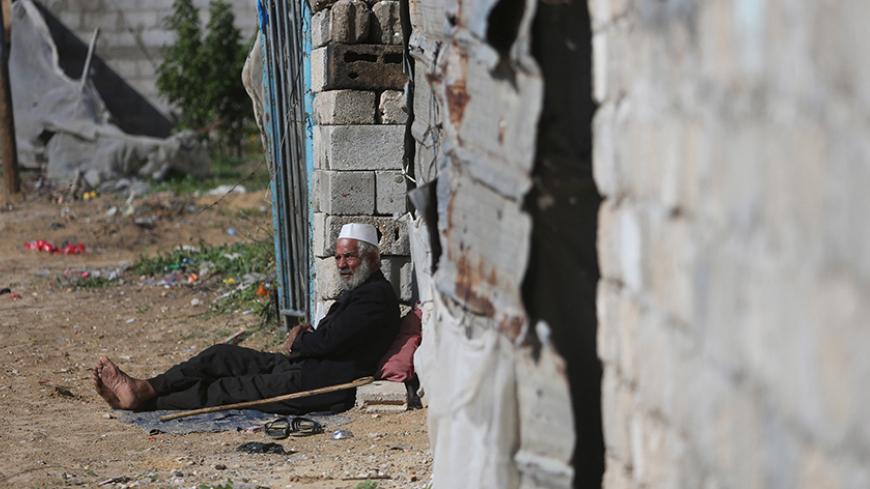 GAZA CITY, Gaza Strip — Hundreds of residents in the Gaza Strip lined up in front of banks April 10, the day before the Palestinian Authority Social Affairs Ministry in Ramallah began disbursing welfare payments to poor families.

The payments — 150 Israeli shekels ($41) per family member — are disbursed to poor families without an income every three months. People who expect to receive these payments must check with the tax office to ensure their names do not appear on a tax roll; in April, 638 families in Gaza discovered that their payments had been denied as a result of the updating of tax records.

Adel Abu Mustafa, a father of five from Khan Yunis, can no longer work because of severe burns covering his entire body as a result of an accident involving a gas lantern. Abu Mustafa waited in line from 11 p.m. April 10 until 10 a.m. April 11 only to find out that his payments had been cut off.

Abu Mustafa had opened a small shop selling vegetables with a $2,000 grant from Oxfam, but less than six months later he ran out of funds to continue operating the shop. His tax record, however, is still listed at the Labor Ministry, despite many requests he sent to cancel it.

“I am poor and I cannot work. I do not own any business. Why did they cut off our allowances? How will my children live now? I ask social workers in Gaza and the West Bank to come and visit my house to see for themselves our poor living conditions before they decide to cut off our allowances,” Abu Mustafa told Al-Monitor.

He added, “Many families have been disbursed allowances as part of previous procedures, after having been vetted upon the recommendation of the Finance Ministry. It appeared that [these] families have already been given allowances and therefore are no longer entitled to new ones.”

Barghouti called on the families whose payments were cut off to go to the Labor Ministry in Gaza to update their tax and financial records, which would then be sent to the Finance Ministry in Ramallah; then their file is reviewed again. He said that even employees working for the government or the United Nations Relief and Works Agency for Palestine Refugees in the Near East had been receiving these payments. He said some people whose allowances were cut off have tax records despite having closed down their businesses because they were unable to pay the required taxes. They have to settle the debt in order to cancel their tax records, but don't have the money to do so. However, Barghouti said these people still deserved to receive welfare payments despite having a tax record.

“The files of these families will be presented to the Cabinet to be discussed in the coming sessions. We will have two options: either take them off the list or disburse allowances,” Barghouti said.

The Social Development Ministry said that in April, the Finance Ministry had ended welfare payments for 2,577 Palestinian families, including 638 from the Gaza Strip.

Youssef Ibrahim, the undersecretary of the Social Affairs Ministry in Gaza, told Al-Monitor that there has been contact with the authorities in Ramallah in this regard, and that there are promises to address the issue and make special disbursements for deserving families that have been cut off.

This time, however, the Finance Ministry in Ramallah did not notify Gaza about its decision to cut the payments to some families and about the need for the tax records to be updated.

Hussam al-Dajani, an independent writer and a political analyst, said the Finance Ministry’s decision to cut payments is a serious matter as it affects Gaza's most vulnerable social strata, which consists of poor families, the elderly and the disabled.

“Regardless of the justifications given by the Finance Ministry Ramallah to cut off provisions, this decision comes in tandem with the steps and threats by President Mahmoud Abbas to Gaza. These sanctions affect primarily the marginalized and poor social segments, which can negatively affect the security, stability and social conditions in the Gaza Strip,” Dajani told Al-Monitor.

He said, “Those who were behind the decision to cut off allowances to the poor are well-aware that the latter cannot afford to lose these provisions, unlike the other segment [PA employees in Gaza whose salaries were cut by about 30%] that was paid regularly [every three months].”

He accused Abbas of trying to push the poor to mobilize against Hamas in the Gaza Strip, in case Hamas refuses to relinquish control of Gaza.

As a result of this situation, some Palestinians who are unable to find work and therefore live off welfare payments now face the risk of acute poverty and displacement.