The US Commission on International Religious Freedom is under fire from one of its own. 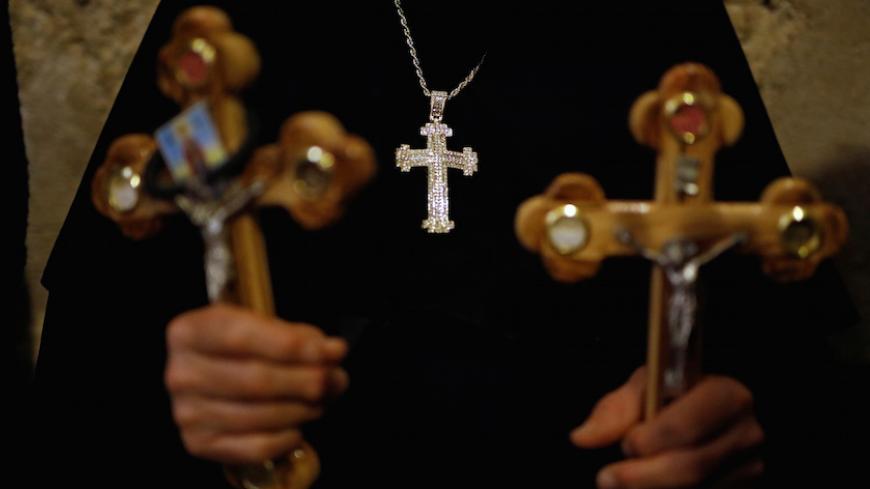 A worshipper holds crosses inside the Church of the Holy Sepulchre during a Good Friday procession in Jerusalem's Old City, April 14, 2017. - REUTERS/Amir Cohen

A panel of experts created by Congress to defend religious freedom is being accused of whitewashing Israeli discrimination against Christians and other religious minorities.

In an unprecedented public dissent against the US Commission on International Religious Freedom (USCIRF), the only Middle East Christian on the panel is accusing the panel of a "continuing and glaring refusal" to hold Israel to account since the commission's founding in 1998. Arab-American activist Jim Zogby, a 2013 Barack Obama nominee whose term is up this year, argues in a scathing dissent to the annual USCIRF report that will be released April 26 that the panel is betraying its original mission and harming its reputation.

"Because I value the mission, I could not leave without stating publicly my concerns with how this commission has operated," Zogby told Al-Monitor. "I believe that we have not interpreted the mission correctly, and therefore we've not made a difference."

In his dissent, Zogby argues that the panel should focus its energy on advising the US State Department rather than creating "duplicative" reports of problematic countries. But he reserves most of his recrimination for the panel's reluctance over the years to take actions that could be seen as hostile to Israel.

"I believe we have an obligation to consider Israel's use of religion to discriminate against both its own citizens and Palestinians living in the occupied territories," Zogby writes, "as well as its violations of a range of freedoms of Christians, Muslims, and non-Orthodox Jews."

Zogby, a Maronite Catholic, has his own share of detractors in the pro-Israel camp. He is president of the pro-Palestinian Arab American Institute advocacy organization and unsuccessfully fought for language in last year's Democratic Party platform that would have called for an "end to occupation and illegal settlements."

"Jim Zogby has had one single goal in all of his criticism of the commission and all his activities when on the commission, and that is to attack Israel," said Elliott Abrams, a former official in the Ronald Reagan and George W. Bush administrations who twice served as a USCIRF commissioner.

Zogby's dissent comes as Congress is working on new spending for legislation for groups such as the USCIRF, which was reauthorized at the end of last year. The USCIRF declined to comment ahead of the release of its report.

Zogby is not alone in his observations.

In November, representatives of 11 major US religious communities and 34 Christian groups from Jerusalem, the West Bank and Gaza wrote to the commissioners noting a "conspicuous gap" in reporting on freedom of religion in Israel and Palestine in its two-decade history. The letter was accompanied by a 192-page report from the US nonprofit Palestine Works accusing Israel of "structural" discrimination against Christians and other religious minorities.

"What we see in Israel and [Palestine] is a system that seeks to establish the dominant, privileged position of Jewish Israelis in a manner that has discriminated against the Christian and Muslim Palestinian population," the church leaders wrote. "The system in practice has also negatively affected non-Orthodox and secular Jews, while promoting the fragmentation of the Palestinian population along religious lines."

The letter specifically condemned "discriminatory laws that impact the freedom to marry, family reunification, discrimination in housing and land ownership, the freedom of movement, and the right to worship and to maintain holy sites." The Israeli Embassy in Washington did not respond to a request for comment.

Both requests were rejected by a "slim majority" of USCIRF commissioners following a bitter debate, according to Zogby.

"The level of vehemence that greeted the receipt of these letters was so great that some commissioners expressed concern that if we were to adopt these requests ... it would consume the commission in endless rancorous debate, paralyzing us for the rest of the year," he writes in his dissent. "We were, in effect, bullied into silence."

Critics say it's not the first time.

Drew Christiansen, a former director of the US Conference of Catholic Bishops' Office of International Justice and Peace now with Georgetown University, accompanied Jerusalem Roman Catholic Bishop Fouad Twal before the commission in 2014. He said Twal's criticism of Israeli restrictions on Palestinians and the proposed creation of a "Christian ID" were met with open hostility.

"The reception I'd say was antagonistic, defensive of Israel and not at all interested in hearing out [...] or even volunteering remedies for these problems," Christiansen told Al-Monitor. "The whole burden of the thing was to have Patriarch Twal defend his claims, which would have been well known to anyone who knows the region and knows the policies of Israel toward Christians, particularly those living in Jerusalem."

Christiansen said an alliance of Jewish hard-liners and evangelical Christians on the commission has long stymied any investigation or criticism of Israel. Zogby argues in his dissent that as a result, the USCIRF is letting down Christian and Muslim Palestinians, encouraging Israeli rights violations and opening up the commission to accusations that it has double standards.

"The charge that USCIRF has a double standard particularly undermines our ability to effectively advocate for religious freedom in Arab countries, the leaders of which can ignore the substance of USCIRF’s critique of their record and instead dismiss us as hypocritical," Zogby writes. "And so I dissent because I value religious freedom and cannot turn a blind eye from any victim community and because I know that our refusal to be balanced in our assessment of religious freedom concerns reduces our stature and calls into question our credibility."