A Turkish construction company, which runs major operations in Russia and was the builder of Erdogan’s controversial palace, figures prominently in a deal to create a joint investment fund between the two countries. 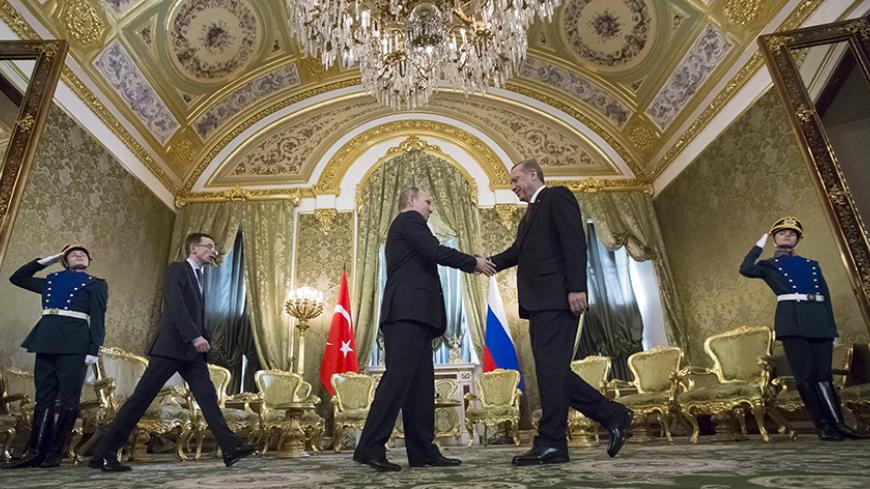 Following President Recep Tayyip Erdogan’s March 10 visit to Moscow, which saw the signing of eight bilateral deals, Turkey’s top economic columnist Tevfik Gungor Uras penned an article headlined “We keep signing deals with Russia.” In a rather sarcastic tone, he listed an array of deals and protocols signed between the two countries in recent years, questioning how much progress was actually achieved on the ground.

According to analysts, the ruling Justice and Development Party (AKP) is scrambling for rapprochement and expanded ties with Russia as its international isolation deepens. This includes intensified efforts on military and diplomatic levels as well as in the economic field.

One of the new protocols with Moscow involves the establishment of a $1 billion joint wealth fund. To what extent it will materialize remains to be seen, but the plan has one truly intriguing aspect: financing Turkey’s Ronesans Holding. The company runs major construction operations in Russia and is also the builder of Erdogan’s lavish presidential palace, which the opposition says remains an illegal structure.

Turkey’s own sovereign wealth fund — widely seen as an attempt to create a parallel budget and provide lifesavers to pro-government businesspeople under financial strain — is still in the process of being shaped, but here it is already poised for another controversial venture. According to the deal, the joint fund between the Turkey Wealth Fund (TVF) and the Russian Direct Investment Fund (RDIF) would be created with contributions of up to $500 million by each side.

TVF board Chairman Mehmet Bostan said the TVF and RDIF “will work on profitable investment opportunities in both Turkey and Russia to contribute to the two countries’ economic growth and boost their prosperity levels.”

The RDIF, created in 2011 to support foreign direct investments in Russia, said in a statement that the deal with Turkey would help advance cooperation with Ronesans Holding. According to the statement, the joint fund will invest in various projects in Russia, and “the implementation of joint projects with Ronesans Holding will create up to 2,500 jobs at the development stage and over 1,000 jobs at the operational stage.”

Erman Ilicak, the president of Ronesans, said, “I believe this agreement holds a strategic importance for the economies of both countries. We are happy and proud to partner with RDIF.”

Nail Olpak, the head of Turkey’s Independent Industrialists and Businessmen’s Association — known as the business group behind the AKP regime — stressed that normalizing economic ties with Russia was also of strategic value for Turkey, along with reconciliation on the political level. “The $1 billion Turkish-Russian joint fund will clear the way not only for investments in Turkey and Russia but also for cooperation in third countries,” Olpak, who was part of the business delegation accompanying Erdogan in Moscow, said.

Ronesans Holding is the second largest foreign construction company operating in Russia. It has undertaken a variety of projects, ranging from shopping malls, business centers and high-rises to industrial facilities and power plants.

According to the RDIF, the company is now involved in preliminary work “on opportunities in developing health care centers and transport infrastructure, including bridge and toll road construction.” The archives show that the cooperation between the RDIF and Ronesans dates to 2014. In December that year, Ilicak told Turkey’s Hurriyet daily that his company had signed a $400 million partnership deal with the RDIF. Praising the RDIF as “the world’s most successful investment fund,” Ilicak said, “We have invested $1.8 billion so far in real estate in Russia. With this deal, we will now invest another $3.8 billion. For the RDIF, this is a first. We have acquired the land and construction permits. Also, the RDIF will bring us together with foreign companies that want to invest in Russia.”

Yet the crisis over Turkey’s downing of a Russian warplane in November 2015 stalled progress on many cooperation deals. Now the TVF is stepping in to revive the impetus.

But why Ronesans? Does this have anything to do with the fact that the company was the builder of Erdogan’s presidential palace? The construction of the palace was highly controversial. Built on a protected site, it was several times challenged at the courts, and its cost still remains unclear. Ronesans’ contribution was said to be significant.

According to Development Ministry data, the palace — described initially as a prime minister’s office, for Erdogan was not yet elected president — was put on the public investments list in 2012, with its project cost estimated as 650 million Turkish liras (some $179 million). According to data by the Housing Development Administration, an agency attached to the prime minister, the construction of the palace was awarded to Ronesans as a project worth 595 million Turkish lira.

As the construction proceeded, the Ankara branch of Turkey’s Architects Chamber raised allegations that the real cost was much higher, drawing up its own calculation of materials used in the project. In November 2014, Finance Minister Mehmet Simsek said in parliament that the total cost of the project was more than double the estimated cost at 1.37 billion Turkish liras. A few months later, in response to a written question by an opposition deputy, Simsek said he did not have cost figures. Then, in the Development Ministry’s investment program for 2015, the cost of the palace was put at 1.4 billion Turkish liras, up 115% from the original figure.

As Turkey fast drifts away from transparency and accountability, among other democratic norms, the construction cost of Erdogan’s palace remains a mystery. In the meantime, reports of a private contribution by Ronesans have never been denied, which brings to mind an intriguing question: Is the support offered to Ronesans through the joint fund with Russia a way to repay the palace’s debt?